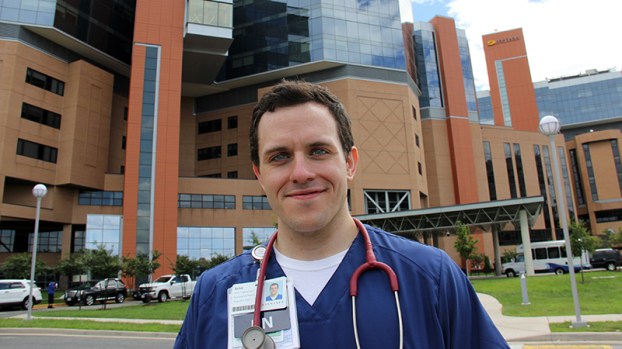 Not only did John Failmezger land a job at Sentara Norfolk General Hospital only two months after graduating, he also was hired to work in the Vascular Intermediate Care Unit — something that does not commonly happen overnight in the nursing profession.

According to Paul D. Camp Community College Dean of Nursing and Allied Health Dr. Debbie Hartman, nurses would typically have to work a couple of years in a medical or surgical venue before moving to a specialty unit. However, considering that the May 2020 graduate was also sought after by Sentara Obici Hospital for a student nurse position during clinical rotations at Camp, makes his new position not so surprising after all.

“That’s high praise,” said Hartman. “He was an exceptional student and worked very hard, excelling in both his academics and in the clinical component of the RN program.”

Failmezger remained at Obici for more than a year, gaining priceless experience until recently departing, in order to transfer to his new RN position in Norfolk.

“I was fortunate enough to be hired as a student RN to perform the work of a Nursing Care Partner, which is essentially a nurse aide,” he said about his responsibilities at Obici. “I was in the Nurses Resource Pool, which meant I worked wherever there was a need from day to day.”

That included the units designated for COVID-19 patients—sometimes conducting the screenings and temperature checks of all who entered the hospital. And while it got hectic at times, he still loved what he was doing.

“I am glad to do what I can to help the hospital adapt and help my co-workers and the patients,” he said. “Getting through this [during the pandemic] has never been much of an issue for me because I like the work and now, I want to be able to do even more as a new nurse.”

The 29-year-old has volunteered as an Emergency Medical Technician since 2015, serving Smithfield during his first year in nursing school in 2018. He was vice president of the Camp Community College Registered Nursing Class of 2020 and served as a member of the National Student Nurses’ Association.

During a ceremony where registered nursing students receive a special pin for completing the program, he was honored with two additional awards — The Mentorship Award and The Academic Excellence in Nursing Award. For the first time, the event was held virtually like many other ceremonies due to the pandemic. However, it was still a proud moment for Failmezger.

“I was glad that my family members were still able to watch the ceremony online and share the experience with me,” he said.

He is also grateful for the nursing program and for instructor Trudy Kuehn, known affectionately as “Mrs. K” by her students.

“The faculty, especially ‘Mrs. K,’ were able to move us over to remote learning and still accommodate our learning needs and address our concerns,” he said.

It was a very “strange” time moving forward with the nursing program, working at the hospital and studying for board exams, but Failmezger said that everyone just had to adapt, albeit easier for some than others.

“Thinking and worrying about COVID-19 would often be this stressful distraction from my studies,” he said. “But, paradoxically, a strong source of motivation.”

The registered nurse feels prepared for his new career due to the program and instructors. After being congratulated by Dean Hartman for passing the board exam, he said, “I could not have done it without this amazing nursing program. [It was the] best decision I’ve ever made.”

Wendy Harrison is the communications specialst for the college. Contact her at wharrison@pdc.edu.