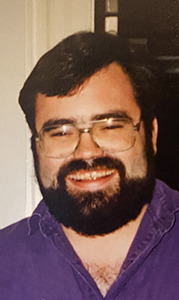 James Sidney Frohman, 53, a life-long resident of Suffolk and Chuckatuck, passed away on Aug. 18, 2020. He was the son to Carroll Godwin Frohman and the late David James Frohman, of Suffolk.

James attended Nansemond-Suffolk Academy and graduated from Blue Ridge School. He later attended Chowan College before graduating from Marymount College. Upon returning to Suffolk, nothing made James happier than spending time with family and friends. He loved them all, but he was especially grateful for devoted friends Jesse and Jan Pruden, who were there to the end, boosting his spirits and helping in any way needed.

James was a man of many interests and talents. He loved the outdoors, whether sitting in a tree stand hunting deer with his Southampton Hunt Club friends or cooking delicious barbecue and ribs on the grill for small or large gatherings of friends and family. He was a serious duplicate bridge player, playing several times a week, and an avid reader and history buff. He was an animal lover, as well, and he adored his Bassett hound, Norman. Sadly, James’ declining health forced him to find a new home for Norman. When Norman later came to visit, it brought James much joy.

In addition to his mother, Carroll Frohman, of Norfolk, James is survived by his brothers, Daniel Frohman and his wife, Karen, of Richmond and Charles Frohman and his wife, Faye, and their children, Flint and Margaret, of Minneapolis; his uncles, James C. Godwin and wife, Ellen, Dan Frohman and wife, Pam; and many cousins that he loved dearly: Virginia Frohman Gidley and her son Clifton, Charlie Frohman, Paul Frohman, Russ Frohman, Brooks Godwin Olli, Martha Whitney Farris, Virginia Godwin, Margaret Jonas, Eliza Colmes and Margaret Brown Klages.

In lieu of flowers, donations may be made to Alcoholics Anonymous, Blue Ridge School or St. John’s Episcopal Church. Condolences may be registered at RWBakerFH.com.