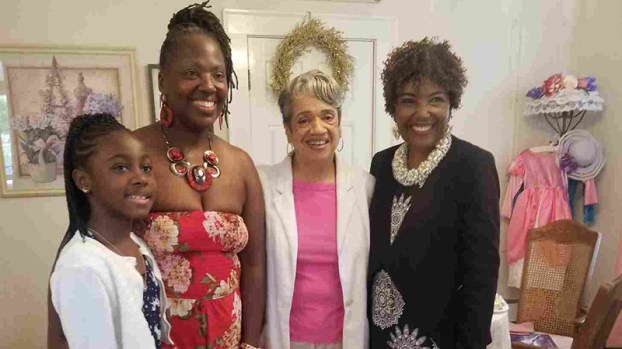 A back-to-school tradition that has had many stages continues to inspire girls another year.

The third annual Zoey Tea Party will be over Zoom this year instead of the Stillwater Tea House on Prentis Street. Tonya Swindell and her daughter Zoey, 10, started this tea tradition after a house fire in 2017 as a way to de-stress before school. The next two years, they decided to host one with Zoey’s friends.

“We were unsure how we were going to pull it off this year,” said Swindell. “I asked Zoey if she still wanted to and she said yes. We contacted our friends QuaWanna Bannarbie and her daughter, Jenesis, who attended last year, and they have collaborated with us to pull this off.”

Approximately 22 girls have received an invitation to participate in this year’s Zoom tea party. According to Swindell, this is a diverse group of girls that come from different races, cultures, backgrounds, and a wide age range. Friends from California and a cousin in North Carolina will be tuning in to the party.

“There’s a limit at the tea house of how many girls can attend,” said Swindell. “The bright side of being virtual is that we can have as many as we like.”

Those who attend are asked to have supplies ready for the activities planned. The girls will use permanent markers, paint pens or acrylic paints to decorate a teacup into which to put their tea of choice. Other activities include decorating sugar cookies with sprinkles and frosting and making finger sandwiches to complement their tea.

“This isn’t just about the tea party,” said Zoey. “We want this to inspire other mothers and daughters to spend time together and encourage each other. I want this to become national, so friends can see each other.”

At past tea parties, a guest speaker would come to give the girls a word of encouragement and inspiration. Last year, the speaker was Dr. Christine Darden, who was in the book “Hidden Figures: The American Dream and the Untold Story of the Black Women Mathematicians Who Helped Win the Space Race,” by Margot Lee Shetterly that inspired the 2016 movie. This year, plans are still being made. Zoey has won awards for her poetry, so she might share a poem to inspire her friends.

“We just want to come together to be inspired and encouraged for this coming school year,” said Swindell.

Suffolk Tourism has released the second volume of its free Suffolk-themed activity book. While folks are enjoying the last stretch... read more