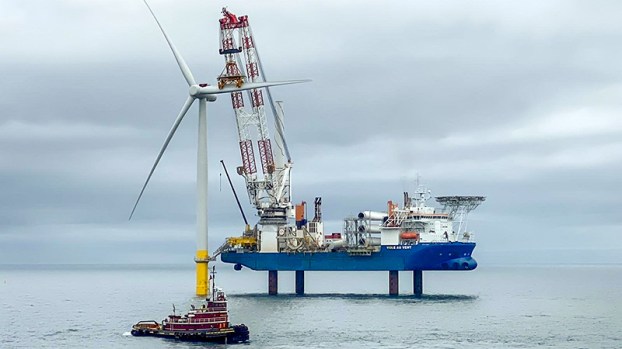 Dominion Energy announced the successful installation of two wind turbines earlier this summer 27 miles off the coast of Virginia Beach. The two are part of a pilot program, which Dominion hopes to eventually become the largest offshore wind farm in the United States.

Gov. Ralph Northam on Aug. 13 announced $5.5 million in Department of Housing and Community Development grants to support economic and public health challenges created by the COVID-19 pandemic — $529,788 of which will go to the Hampton Roads Economic Development Alliance to establish an offshore wind supply chain in the region.

The Alliance, a nonprofit public-private partnership that represents 11 Hampton Roads localities, had applied for the funding earlier this year in hopes of courting European wind turbine manufacturers to America’s, and more specifically, Virginia’s shores.

Currently, there are two 6-megawatt wind turbines installed 27 miles off the coast of Virginia Beach, which were constructed via a partnership between Dominion Energy and the Denmark-based company Ørsted (pronounced “ur-sted”). The two turbines are a pilot project for what Dominion intends to eventually become the largest offshore wind farm in the United States, large enough to power 650,000 homes.

In addition to this project, which is slated to be built sometime between 2024 and 2026, there are about 20 other offshore wind farms, most in earlier stages of development, spanning from North Carolina to Massachusetts.

“The thought is, the supply chain to build these turbines is going to need to move from Europe to the U.S.,” said Matt Smith, the Alliance’s director of offshore wind business development.

“The number of parts in these turbines is in the thousands,” Smith said. “There’s the potential for businesses generally working in that space of advanced manufacturing … getting connected with major manufacturers. A company in Suffolk or Isle of Wight wouldn’t have to be right on a waterfront location.”

“The folks that would be working to assemble and maintain, and potentially build these turbines could be coming from anywhere in Hampton Roads,” he added. “The potential for job creation is really significant.”

But how exactly does one go about enticing a European wind turbine manufacturer to set up shop in Hampton Roads?

One possible strategy, Smith said, is to attract a large “anchor” manufacturer in hopes that others would want to locate in close proximity to that company. More immediately, the Alliance hopes to help local businesses work with Dominion on design phases of its turbine project — contracts that could become available within the next year. The long-term goal, he said, would be for Hampton Roads to become a supply hub not only for Dominion but for projects all up and down the East Coast.

“The construction of these two turbines is a major milestone not only for offshore wind in Virginia but also for offshore wind in the United States,” Dominion Chairman, President and Chief Executive Officer Thomas F. Farrell II said in a June 29 press release. “Clean energy jobs have the potential to serve as a catalyst to re-ignite the economy following the impacts of the pandemic and continue driving down carbon emissions.”

As for the grant money, most of this will fund two positions at the Alliance dedicated to offshore wind business development. Some funding will also be used for travel, consultant assistance, marketing and outreach. There is a matching requirement for the Alliance, but this shouldn’t burden the taxpayers of any of its member localities.

“We had to match half of the grant money, mainly in-kind through resources the Alliance is putting forward to assist with the effort,” Smith said.

Localities in the region won’t need to contribute local tax dollars for the Alliance to accept the grant, he confirmed.