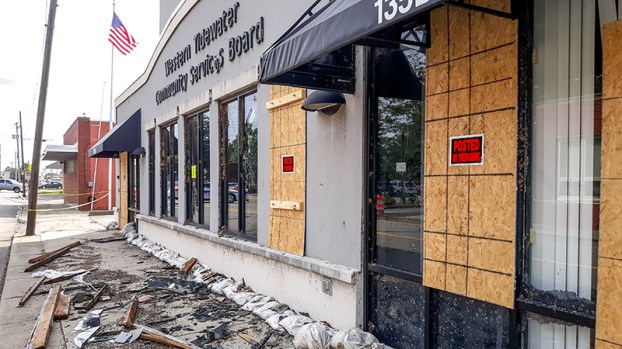 The Western Tidewater Community Services Board is persevering in its mission to serve local residents with mental health, substance abuse or intellectual disability related problems, despite sustaining heavy damage to its downtown building in the Aug. 4 tornado.

“We have enjoyed that as an easily accessible location for the Suffolk community,” said Demetrios Peratsakis, executive director of the WTCSB. “It’s been an important office location because of its essentially being downtown and its proximity to a number of folks that walk to obtain services.”

The office building, on South Saratoga Street, was one of several downtown commercial buildings that were heavily damaged in the EF1 tornado spawned by Tropical Storm Isaias. Others nearby included the Suffolk News-Herald, Brandon House Furniture and the Knight Finance building, the latter of which is being demolished soon.

Peratsakis said the ceiling is caved in at a number of places. A couple of air transporters on the roof were ripped free, and the second floor possibly has structural damage.

“Thank goodness we had no staff, no employees and no clients” in the building,” Peratsakis said. The tornado hit the downtown area between about 3 and 3:30 that morning.

In addition, about five to seven city vehicles used by the WTCSB in the Cherry Street parking lot across the street, adjacent to the Suffolk News-Herald, had windows blown out and other damage.

Peratsakis said a transition to some remote work during the pandemic actually set them up quite well for losing the use of the building, even if it’s temporary. Staff and clients have been receiving virtual services since March.

“Because we wanted to protect both staff and client safety, we moved as much as we could virtual,” Peratsakis said. “Many of the folks who have been receiving virtual services have not only done very well with it, but quite a few of them actually prefer it.”

People have been able to arrange telehealth appointments, but those who are unable to access telehealth for whatever reason have still been able to come to WTCSB locations, Peratsakis said.

Many more people are in need of services from the WTCSB due to COVID-19.

“Since March 1, we’ve had almost 700 new people coming to us for service,” Peratsakis said. “That’s in addition to people we had been serving.”

He said that worry about the virus, confusion about mixed messages, anxiety about employment prospects, social unrest and moving into an election cycle have been “very triggering for a lot of individuals,” causing more people to need to reach out for mental health services.

Peratsakis said he was grateful to the city and to the WTCSB’s board of directors for their support.

The Saratoga building will be out of commission for some time, but in the meantime, people can still access services, Peratsakis said. The WTCSB has three other locations in Suffolk: 5268 Godwin Blvd., 1000 Commercial Lane and 7025 Harbour View Blvd. Suite 119. There are also locations in Smithfield, Franklin and Courtland.

Those in need of services for themselves or a family member can call 758-5106.

Suffolk Public Utilities on Thursday announced a program to help people with their water, sewer and wastewater charges who are... read more