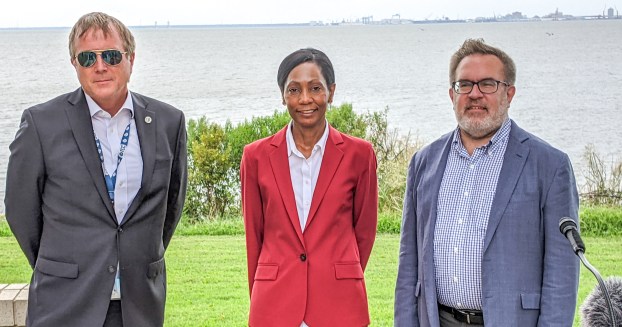 ‘Something special’ for former Depot site

While there is still more cleanup to be done at the 975-acre former Nansemond Ordnance Depot Superfund site in North Suffolk, federal, state and local officials at the site lauded the decades of work at the site as they proclaimed about 300 acres of it ready for development.

Environmental Protection Agency Administrator Andrew Wheeler, who toured the site during an Aug. 24 visit, touted the work to it as transformational. He also toured the Virginia Port Authority during his trip to Hampton Roads.

“The Trump administration has put a renewed focus on Superfund cleanups since the moment he entered office,” Wheeler said. “The Nansemond Superfund cleanup has transformed this area of Suffolk with new businesses and housing developments.”

The site is located on waterfront property at the end of College Drive and was where the military stored ammunition during World Wars I and II. It was also used as a disposal area for bulk explosives, small arms ammunition and scrap metal. Cleanup of the site has been a more than 30-year process that is still not complete.

Col. Patrick Kinsman, commander of the Norfolk District of the U.S. Army Corps of Engineers, said 10 of the 21 projects on the site have been completed as of January.

“As we continue the cleanup process,” Kinsman said, “we look forward to strengthening our collaboration with those same partners — federal, state and local — as we address the risk to human health and the environment from our past (Department of Defense) activities and return the land to the community.”

Wheeler toured what will be the next phase of the site’s redevelopment, which will be a mixed-use development of commercial and residential properties within it, with revenue from the sale of those properties going to support Tidewater Community College.

“It will be a huge boost for the college, as well as a nice tax basis for the (city) itself,” Wheeler said.

Matt Baumgarten, executive director of the TCC Real Estate Foundation, said it is hopeful that construction on the east side of its property near the freshwater lake would begin with roadway and utility infrastructure by summer 2021. He said the property, which was originally gifted to the college by Fred Beazley, will be “an economic engine for perpetuity, to feed money back to the college” to help its students. It will also, he said, benefit the city, with a lot of tax revenue.

“What we’re here to do is create a new world out here,” Baumgarten said, “a new live, work, play, learn community, the likes that no one’s ever seen. And we’re going to build something that (will be) the first of its kind.”

City Economic Development Director Kevin Hughes said the city is working with the TCC Real Estate Foundation, which currently owns the nearly 300 acres, to create some waterfront access. The foundation’s website notes that about 245 of those acres are buildable.

“We believe that the timing and the efforts that you’re seeing today are coming to fruition,” Hughes said. “There’s so many great, wonderful partners at the federal and state level and our friends at the (TCC) Real Estate Foundation, you can really feel that something special is right on the tip.”

Wheeler said that when coupled with the replacing of diesel engines with cleaner ones at the port authority, the Hampton Roads region, with EPA’s help, will benefit from a cleaner environment.

Baumgarten said that within about two years, there will be people living adjacent to a 16-acre freshwater lake, which at its northern point is a few yards away from the confluence of the James and Nansemond rivers. Within two years, he said people will be living along the lake and will be able to fish and kayak the lake and go into the river and the saltwater.

That property, he said, has been determined to be clean for residential development, so that’s where development will start while additional cleanup work continues.

“Developments are hard to predict on a schedule,” Baumgarten said. “Schedules are typically sliding on a real estate project, but by all means, if everything lines up and we get the rezoning and the permitting, and the right developer to come in, we’ll be in those woods in ’21 cutting down.”

Baumgarten said he has received many unsolicited proposals for the property, but said it has set the bar high for what it wants on it — residential and retail. With what he described as million-dollar sunrise and sunset views of the water on the last undeveloped large-scale waterfront site in Hampton Roads, he expects to see neighborhood retail such as breweries, restaurants, art galleries, apartments above the retail, high-end townhomes likely around the lake with rooftop decks.

“We’re actually scoping out developments from West Palm Beach (in Florida), places like that that really set a new standard,” Baumgarten said. “I know the folks down in Harbour View would want that. They want to keep their property values going up and up, and I think what you’re going to see here is something — this is not going to be some bedroom community. You’re not going to see us put up a bunch of quad-plexes and walk-up apartment complexes. This is going to be something special.”

Giving success back to the community

The co-founders of a Suffolk-based undergarment company donated laptops to five students in need for this virtual school year. Lance... read more