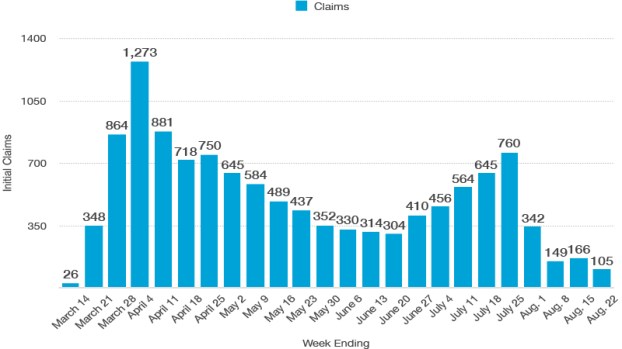 Seasonally-adjusted Initial unemployment claims in Western Tidewater, South Hampton Roads and across the state have seen significant declines over the past month.

Statewide, 11,436 people filed initial claims for the week ending Aug. 22, down 3,715 from the previous week and resuming a trend of steady declines during August. The total represents close to the average weekly volume for 2009, according to the Virginia Employment Commission.

Continued weeks claimed totaled 249,745, mainly made up of people filing recent initial claims who continued to file for unemployment insurance benefits during the COVID-19 pandemic.

The state’s unemployment rate, at 8% in July, dropped by a tenth of a percent from June, according to the employment commission. The largest job loss from July 2019 to July 2020 has come in the leisure and hospitality industry, down 91,300 jobs. The next-largest decline has taken place in government, which is down 59,100 jobs, with 15,300 fewer state employment jobs and 46,100 fewer local government jobs. Overall, the state has lost 284,100 jobs over the past year.

Other areas of Western Tidewater have also seen declines in initial claims.

Twenty people in Franklin filed initial claims for the week ending Aug. 22, down six from the prior week and down 128 from July 25. Continued claims by city residents dropped from 535 to 508.

In Southampton County, 15 people filed initial claims during the week ending Aug. 22, a slight increase from the previous week, but down 32 from July 25. Continued claims by county residents dropped by 33 to 289.

Across South Hampton Roads, initial and continued claims continued to decline. Virginia’s decline of 2,281 people was the 14th-largest decrease among states.

Area could see remnants of Laura

After two days of heat indices above 100, the area will cool down on Saturday, but not quite the way... read more