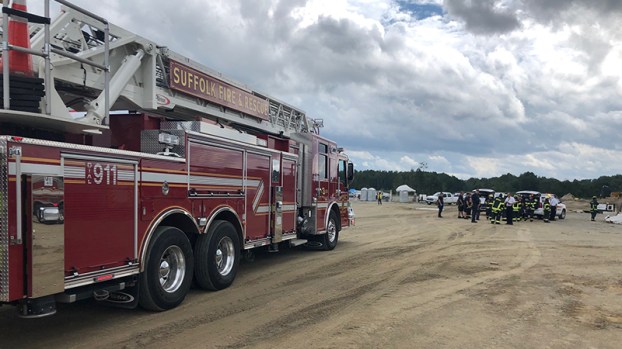 Two people died in an industrial accident at the Amazon construction site on Saturday afternoon. (City of Suffolk Photo)

UPDATE: Crews have completed the search of the site and have located no additional victims, according to city spokesman Tim Kelley. No additional injuries have been reported. All other workers at the job site have been accounted for.

The names of the deceased are being withheld pending notification of next of kin.

Suffolk Fire & Rescue along with Chesapeake and Virginia Beach Technical Rescue were on the scene.

Earlier: Two people are dead and more are unaccounted for in an industrial accident in the 2000 block of Northgate Commerce Parkway that happened Saturday afternoon.

Suffolk Fire & Rescue and Suffolk Police Department responded to the scene when the incident was reported at 2:13 p.m. It happened at the construction site for the Amazon fulfillment center.

Emergency crews have confirmed there are two deceased victims and additional workers unaccounted for, according to a city press release. Emergency crews are searching for those other individuals.

No further details were immediately available, the press release stated.

Lorna Slaughter has made it her mission to make sure city residents have enough food to eat. From forging partnerships... read more