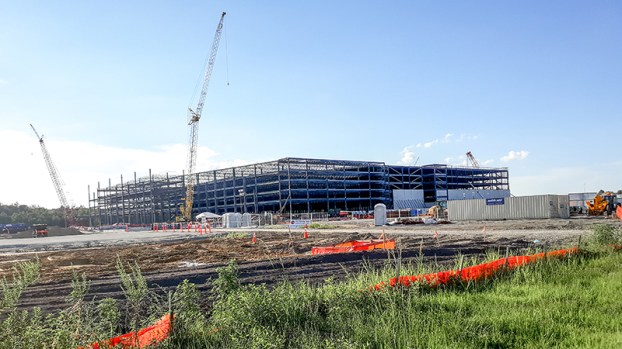 Work stopped on a North Suffolk construction site for an Amazon fulfillment center this weekend after two workers died in an industrial accident. (Tracy Agnew photo)

The company contracted to build an Amazon robotics fulfillment center in Suffolk, where two workers died in an industrial accident Saturday, was cited by the Occupational Safety and Health Administration earlier this year for violations at a Georgia construction site.

Work on the Suffolk site stopped just after 2 p.m. Aug. 29 when an industrial accident at the site killed two people. No other injuries were reported, according to city spokesman Tim Kelley.

The names of the two people who died have been withheld pending notification of next of kin.

Suffolk Fire & Rescue, along with Chesapeake and Virginia Beach Technical Rescue, were on the scene of the accident, which remains under investigation.

The incident was reported at 2:13 p.m. on the construction site for the new Amazon fulfillment center. No further details on the incident have been released.

Since Gov. Ralph Northam, Amazon and local officials announced in March that Northgate Commerce Park in Suffolk would be the site of a robotics fulfillment center, work has taken place daily to prepare it for a 2021 opening.

The fulfillment center, when finished, will be the largest industrial building in Virginia, and the second-largest building overall to the Pentagon. The $230 million facility will have a footprint of 822,833 square feet, and at 95 feet high and four-and-a-half stories tall, will have 3.8 million square feet of space overall.

The construction at Northgate coincides with a facility being built a few miles away in Chesapeake, a 650,000 square foot processing center to handle bulk goods and break them down into smaller orders that will feed Amazon’s supply chain.

The Conlan Company, which has been contracted to build the fulfillment center in Suffolk, was cited by the Occupational Safety and Health Administration in February for a “serious” violation at the construction site for an Amazon robotics fulfillment center in Stone Mountain, Ga., and fined $8,675 on March 13. An informal settlement in April reduced the fine to $5,205.

OSHA cited The Conlan Company as violating Sec. 1926.1430(d) of OSHA regulations, which states, “Competent persons and qualified persons: The employer must train each competent person and each qualified person regarding the requirements of this subpart applicable to their respective roles.”

OSHA lists 19 inspections of The Conlan Company sites, with two violations, and just the one deemed “serious.”

Site plans for the Amazon facility in Northgate Commerce Park were approved in December. The Conlan Company received a building permit from the city March 5.

Scheduled to open next year, the two facilities are expected to bring a combined 1,500 full time jobs — 1,000 in Suffolk and 500 in Chesapeake. Ardine Williams, Amazon vice president of workforce development, praised the two sites for their access to the Port of Virginia, as well as a good infrastructure and strong workforce, good education system and collaboration among localities.

The Virginia Economic Development Partnership worked with both Suffolk and Chesapeake, as well as with the Hampton Roads Economic Development Alliance and the Port of Virginia, to secure the Amazon projects for the two cities. Amazon is eligible for up to $500,000 in benefits through the port’s Economic and Infrastructure Development Zone Grant Program along with funding and services to support the company’s employee training activities through the Virginia Jobs Investment Program.

A grounds-swell of pride at LHS

On a recent Friday morning, Ron Robertson and Roy Waller were each mowing grass at different parts of the Lakeland... read more