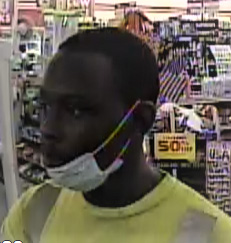 Suffolk Police are seeking the public’s assistance identifying a man wanted for an alleged attempted robbery and sexual assault.

According to a city news release, the incident happened about 8:16 p.m. Friday, Aug. 28, in the 100 block of South Fourth Street.

A woman was walking home from a convenience store in the area when, she reported, the man allegedly sexually assaulted her and attempted to steal the bagged groceries she was holding. He then fled on foot.

“It was discovered that the subject was inside the store just prior to the incident and followed the victim to her street,” the press release stated. An image of him was obtained from the store’s surveillance video.

Suffolk Police have made an arrest in a shooting that led to a car crash in North Suffolk last year.... read more