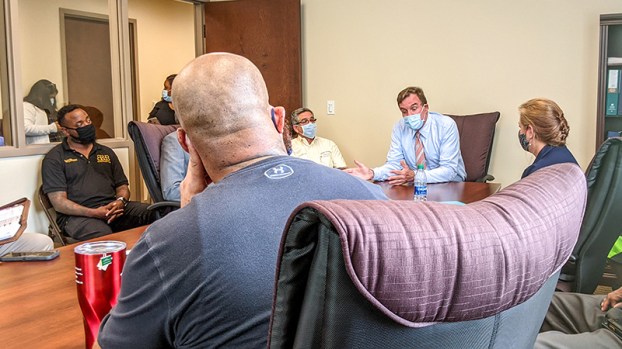 In a Thursday roundtable with Sen. Mark Warner this week, Suffolk business owners asked for further relief for those adversely impacted by COVID-19 and the economic crisis in the country at the Metropolitan Church Federal Credit Union on Tynes Street.

In particular, Warner focused the discussion on how COVID-19 and economic issues have hit minority-owned businesses.

“We know that COVID has hit Black and Brown Americans harder, both healthcare-wise and economically,” Warner said. “And what we’ve got to do is make sure that support for low-income communities, minority businesses, women-owned businesses, is there because these businesses generally don’t have established banking relationships.”

Warner also wanted to emphasize the role of community development financial institutions, or CDFIs, such as the one at Metropolitan.

“My hope is that we’ll have a $10 billion program that we’ll be able to invest in these kinds of institutions that will lend into low income communities,” Warner said.

Regarding the Paycheck Protection Program, Warner said that while it helped small businesses that had established banking relationships, it did not help others without that.

Warner, while highlighting negotiations in the Senate on the next COVID-19 relief package, touted his Jobs and Neighborhood Investment Act legislation that he said would help with economic recovery efforts.

Ronald Hart, who manages Metropolitan with his wife, Ethel, said he has been in business for more than 70 years trying to help low-income communities. They are trying to find ways to help and think the plan Warner presented would help low-income areas.
“This pandemic has had a tremendous impact on our membership,” Hart said. “We have members who are not able to take care of their loans here, and we’ve had to come up with ways to help them along while this pandemic is still in existence.”

LaTroy Brinkley, going into his 13th year as owner of Serendipity Hair Salon, said he was denied for a small business loan, while a business similar to his in its first year did receive a loan. He did not get an explanation for his loan being denied.

Chris Rice, owner of Music Makes You Happy Entertainment, said he, too, was initially declined before getting a loan a week later. Both instances came without an explanation.

Brinkley asked about help for businesses that have already had to close for good, with owners who are losing their jobs and homes.

“I think that is, one, a fair question, and two, I have not seen anybody offer a real plan of make good,” Warner said. “Structurally, I’ve been convinced that CDFIs have a history of being better able to work out people’s problems with low credit scores and stuff.”

Warner also called for more broadband investment, saying bigger companies such as Amazon and Google need to chip in.

LeOtis Williams, owner of LW’s Lawn Service, said he had spoken to landlords whose tenants are not able to pay, and courts cannot evict. He said the problem is that the property they are renting has a mortgage on it and owners do not have any other income other than rent, which hurts their credit rating. Not eligible for the PPP loan because they’re not considered a business, many landlords are struggling, Williams said.

Warner called for regulators to have flexibility “not to ding the bank as much,” which would help banks, landlords and tenants.

Richard Chaing, president of Suffolk Executive Offices, said he tried to help the small business owners get PPP money but all of them were denied.

School Board member Karen Jenkins, representing her husband, Delegate Clinton Jenkins, at the meeting, said she appreciated the dialogue but said more has to be done.

“The conversation is great, but we want to make sure that there’s something put in place that we’re not denied all the time,” Jenkins said.

The Suffolk Police Department is seeking the public’s assistance in identifying a male subject wanted for an alleged armed robbery... read more