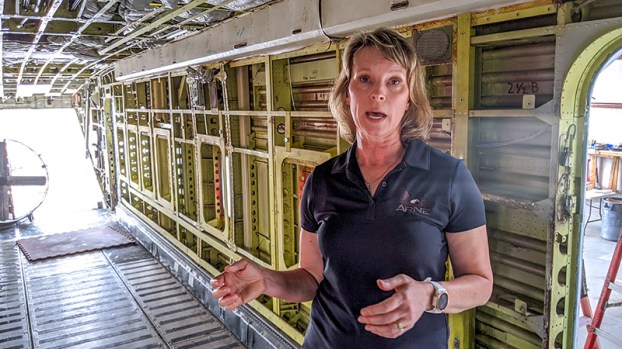 Laura Manthey, owner of ARNE Aviation, ARNE Freefall Solutions and Skydive Suffolk, is expanding operations at Suffolk Executive Airport with the purchase from the U.S. Forest Service of two SD3-30 aircraft to be used for military jump training.

Flying against the grain

Laura Manthey is used to going against the grain.

As the owner of ARNE Aviation, ARNE Freefall Solutions and Skydive Suffolk, she’s the only woman-run aviation company at Suffolk Executive Airport.

But at a time when many businesses have been feeling the effects of the coronavirus pandemic, Manthey’s is growing and as busy as ever.

ARNE recently purchased two large SD3-30 aircraft from the U.S. Forest Service that will be used specifically for military jump training. Both will be modified over the next few months to be ready for the military’s use, but when ready, they’ll be able to expand that part of the business in allowing for more jumps.

But none of it could be done without the experienced staff of 19 people and 60 contractors at her disposal across the United States. They include her chief pilot Rob Garcia, a 27-year Naval aviator and ARNE’s chief pilot, while ARNE’s director of maintenance Frank Leventhal has more than 30 years of experience around the world. Among Leventhal’s experience includes flying celebrities such as the Doobie Brothers and other rock bands, Ted Turner, Bob and Elizabeth Dole, and the Sandler family in Virginia Beach, among others. Manthey describes the two as the heartbeat of ARNE’s operations.

“We weren’t planted here by investors or big corporate money,” Manthey said. “I am the owner of all three of these companies, but it’s not about me. It’s the team that I have, the experts in their area. It’s taken five years to handpick these guys.”

ARNE started as a company providing aircraft for specialized military training, and it has provided aircraft and rigging support to the Navy since 2019. The company has working relationships with five other airports and several facilities capable of supporting military freefall and static line operations. The other locations are all within 50 miles of Joint Expeditionary Base Little Creek-Fort Story in Norfolk. It allows for an increase in training value with different drop zones.

With safety critical and most important to its work, Manthey and ARNE have worked diligently to prep and modify its planes for military jumps, and undergo regular, and sometimes spot inspections on various areas of their planes and operations. It is on what she described as a constant inspection cycle.

“You’re looking for problems before they happen,” Manthey said.

To be able to jump Department of Defense contractors and soldiers, ARNE has to be on the Air Mobility Command, or AMC list. To do that, it had 11 DoD and Federal Aviation Administration inspectors in Suffolk for a week last year.

They scrutinize every aspect of ARNE’s operations, its books on each plane, standard operating procedures for its pilots, and more.

Withstanding that scrutiny, ARNE passed on the first round, which Manthey said is something that doesn’t always happen.

“We’re pretty proud of that fact, and some of that is the people I have in place,” Manthey said.

All of ARNE’s military contracts require that it has an aviation maintenance company and mechanics on staff while military training is going on. That’s how ARNE Aviation began in 2015 along with ARNE Freefall Solutions, and at the same time, Manthey bought Skydive Suffolk.

“It grew because of that need to have an aviation company to support our military training,” Manthey said.

She pointed to ARNE Aviation’s purchase of a skyvan — “the bread and butter of military skydiving” — as most of its contracts require that it have one. The following year, it bought a PAC-750, a smaller plane that originally was one Skydive Suffolk had and holds about 13 jumpers.

Since then it has added three Cessna Super Caravans before buying the SD3-30 planes that were used for smokejumpers by the Forest Service. One of the SD3-30s will head to Arkansas this week for jump modifications. It has a door that currently is not certified to be open in flight, so for military freefall training, that has to happen, Manthey said. The Forest Service did not jump out of the back, but rather from a side door.

The modifications to those planes are expected to take about three months, and then the other SD3-30 will undergo the three-month modification process. When the two newest additions to their fleet are modified, they will be able to hold 30 skydivers each. The other skyvan it has holds about 20 skydivers.

“The benefit of this is that when you have large groups, instead of having them wait in line so long to go on the smaller planes, more jumpers get up in the air faster,” Manthey said, “so we can do more training.”

Though its mission is important to Manthey and her staff at ARNE, she said they are more than just a for-profit business.

She said her company brings in about 50,000 people to the city each year, and it will be a part of the Naval Air Station Oceana Air Show, which this year will be livestreamed.

All of its planes do not stay in Suffolk. Rather, they go to other locations to support skydiving operations. It is supporting Skydive Indianapolis with a Cessna Super Caravan, DC Skydiving with its PAC-750 and Skydive Sussex in New Jersey with its other supervan.

With the addition of the Forest Service planes, ARNE now has seven planes to use.

Manthey in June signed a memorandum of understanding with the Department of Defense for ARNE Aviation to train military pilots and mechanics.

ARNE Aviation’s next goal is to build a $2 million climate-controlled aviation hangar, which will give it more space for its growing operations. Currently, it has a 12,000-square-foot hangar with up to 8,000 square feet of packing space, four video debriefing stations and a 40-person, state-of-the-art climate-controlled classroom. It also has a second, 8,000-square-foot hangar with two additional video debriefing stations and a 20-person climate-controlled classroom with state-of-the-art audio/visual capabilities. And jump teams have 400 acres of the airport for landing areas.

ARNE is poised for additional growth on the horizon while managing its day-to-day operations.

“We are doing some really cool things here that no one knows about,” Manthey said, “and we are truly a homegrown, a Suffolk-grown company.”

To help with the virtual start to the school year, the Suffolk Center for Cultural Arts is launching the Suffolk... read more