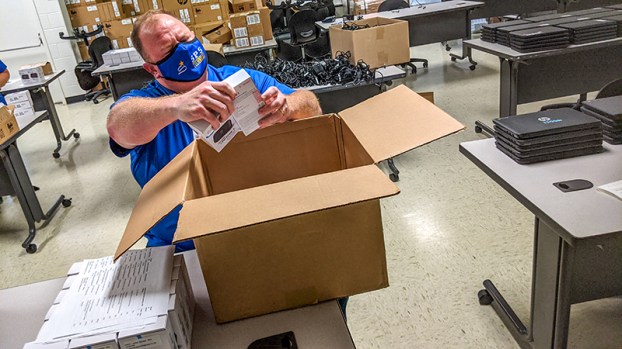 It’s no secret that the rural areas of Western Tidewater lack reliable access to broadband internet.

For those families, who also often lack the ability to pick up a reliable wi-fi signal, the only internet option is a satellite DSL connection. But that’s not strong enough for children and families to watch videos on Netflix, much less stream virtual lessons from their teachers on tablets or laptops.

Technically speaking, it’s like driving behind a farm tractor on a country road.

And as some families have found out in the first week of virtual learning, mobile hotspots, even with unlimited data, do not work without the reliable wi-fi access that comes from adequate cell tower coverage.

Heather Landess, in a letter to the Suffolk School Board read at its Sept. 10 meeting, said connectivity issues are a major problem.

“I have a second grader at Pioneer Elementary who had a horrible first week back to school,” Landess wrote. “As we are in the rural area of Suffolk, we … have little access to reliable internet. The Kajeet (mobile hotspot) devices didn’t work anywhere in our house for a strong enough signal to stream anything. It would barely open the internet.”

John Littlefield, the director of technology for Suffolk Public Schools, has spent months working to acquire, outfit and tune up Chromebooks, prepare mobile devices and determine how nearly 14,000 students will be getting online. More than 12,000 students logged on in the first two days of school.

Knowing not all Suffolk students have a reliable way to get online — he estimated that about 20% of the city’s students do not have their own internet access — Littlefield and the school division has worked to provide multiple options for online access.

Of the Suffolk students who have not logged on in the first week of school, many, said Superintendent Dr. John B. Gordon, are in either specialized programs or are being homeschooled for the year, but are still counted among the division’s average daily membership.

Gordon acknowledged the issues the division is facing in connecting all of its students to virtual learning.

But school divisions like Suffolk’s, as well as Isle of Wight County, Southampton County and Franklin, are not in the broadband business. Their job is teaching students.

“I think it’s fair to say the school division can’t be expected to provide internet at every single house in the city,” Littlefield said.

Isle of Wight County Public Schools, on its website, said it is still looking at ways to get internet to families without reliable access, but it has not found a successful solution. Students in pre-K through third grade, along with special education students, attend school in person twice per week, while students in grades 4 through 12 began the year virtually for at least the first nine weeks.

“We tested hotspots in multiple areas of the county, but could not maintain reliable service at any locations,” it stated.

While it works with county officials on a long-term solution that could take months, if not years, it, too, has had to get creative to connect its virtual learning students.

It has boosted wi-fi signals at all of the county’s schools to allow students to connect from the parking lots, and has outfitted buses with wi-fi parked at the Otelia Rainey Community Center in Franklin, Bethany Presbyterian Church in Zuni and First Gravel Hill Baptist Church in Smithfield.

On the Isle of Wight school division website, it also notes possible wi-fi locations at county libraries, the courthouse complex, parks and recreation buildings, the fairgrounds and at Paul D.   Camp Community College’s Smithfield campus. It also lists possible locations at businesses such as fast food restaurants and grocery stores.

Franklin, whose students will be in virtual classes until at least November, also pieced together a plan to connect students to the internet.

Besides existing broadband that city families may have, it also has buses equipped with wi-fi, mobile hotspots and several locations for students to access the internet.

Local, state and federal government officials have acknowledged the pressing issue of broadband access, but a solution to provide universal broadband access is a long-term one.

Sen. Mark Warner, who visited Suffolk last week, said expanding broadband is crucial, and that the federal government has to make the same commitment to broadband that President Franklin Roosevelt made to electricity in the 1930s.

“One of the things that the virus has shown is that broadband connectivity is not just nice to have,” Warner said. “It’s a necessity. … Every home in America should have high speed broadband.”

Warner said he believes the next stimulus bill related to the COVID-19 pandemic could get a minimum of $10 billion to go toward increased broadband access.

In the meantime, Warner, along with Sen. Tim Kaine and nine other senators, in a Sept. 11 letter, called on the country’s seven largest internet service providers to suspend limits and fees associated with increased broadband use, and for those companies to expand coverage areas. It noted that with more people working from home, and with many students across the country in virtual learning, to suspend data caps and work with public school districts and colleges and universities to provide free or at-cost broadband options.

The letter cited a Pew Research Center study in March that there is a “homework gap” among students who do not have reliable access to a computer and internet, which it said was more pronounced among Black, Hispanic and lower-income families.

“We have heard from public schools who express appreciation for internet service options that enable remote learning, but are also concerned with ongoing data limitations and continued lack of service for many households,” the letter states. “In many situations, online learning activities require additional data allowances beyond plans readily available for students.”

A 2019 report on Commonwealth Connect (https://rga.lis.virginia.gov/Published/2019/RD109/PDF), Gov. Ralph Northam’s plan for universal broadband access, noted that there are 660,000 homes and businesses in the state that need connections.

In the meantime, Littlefield, who is part of a 757 Recovery Group looking for solutions to things like broadband access, is working to map gaps in cell and broadband coverage as the division manages virtual learning, which, in its first week, has had to work through technological issues, most outside of its control.

Littlefield and his staff have been using the CellMapper app to plot out weak service areas for wi-fi to determine where mobile hotspot devices would be more effective.

What it can control, Littlefield said, are the network inside school buildings, the fiber connections between Suffolk Public Schools buildings and the Chromebooks. Cell and home internet connections, personal devices and third-party applications are things the division cannot control.

He said the division could expand resource access centers or outdoor wi-fi sites if needed.

“We’ve got a thousand devices, we have 14,000 students,” Littlefield said, “is that an equitable distribution? It’s hard to say.”

He noted the city is working on a grant for it to partner with Charter Communications, the city’s major cable and internet provider, to expand broadband connectivity in rural areas of the city, but that, too, is a long-term solution. It put in a grant application Aug. 17. Charter is marketed under the Spectrum name.

It would be a $2.5 million grant through the Virginia Telecommunications Initiative grant program to connect the Vicksburg Road, Southwestern Boulevard, Manning Farms and Whaleyville areas of the city. The grant would cover 80% of the cost, with a 20% match of just over $630,000 from Charter Communications.

The grant application states that it would service 18 businesses and nearly 400 residences, most of those in Whaleyville. No other terrestrial providers service these areas of Suffolk. If approved, the application notes the project could take anywhere from eight months along Southwest Boulevard and Manning Farms, to 12 months along Vicksburg Road and 22 months in the Whaleyville area.

Delegates Emily Brewer and Clinton Jenkins, along with Gordon, wrote letters in support of the grant application.

The city, according to the application, would consider this Phase 1 of an overall plan to increase broadband access in underserved areas.

“Ideally, they come up with some kind of broadband solution,” Littlefield said, “or Spectrum expands their infrastructure or another product comes in.”

The developer of the Peanut Crossing development on South Saratoga Street could receive up to $280,000 in façade grant money... read more