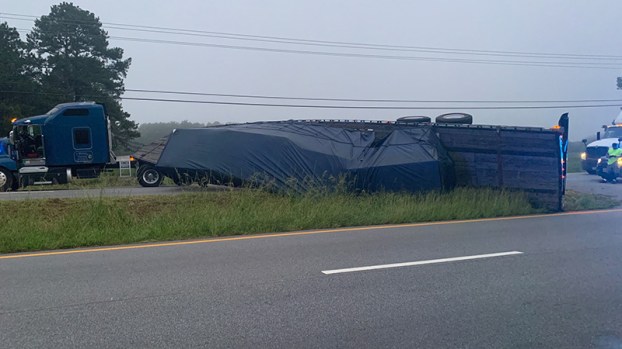 There were no injuries in an overturned tractor-trailer crash on Route 58 Friday morning. (City of Suffolk photo)

Earlier: An overturned tractor-trailer caused no injuries on Friday morning but snarled traffic on Route 58 and nearby roads.

Suffolk Police and Suffolk Fire & Rescue responded to the single-vehicle crash at 6:11 a.m. in the 3400 block of Holland Road, according to a city press release.

The tractor-trailer lost part of its load of flooring, which must be cleaned up before the road can reopen.

Police are alternating traffic between Lummis and Manning Bridge roads. Traffic will be impacted for an unknown length of time.

The investigation into the cause of the crash remains ongoing.