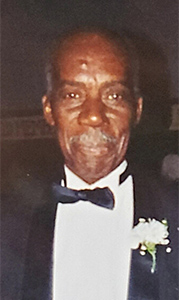 Mr. Jones was born in Nansemond County to the late Ovella Hawkins Stephenson and James Jordan on April 29, 1929. He also spent a great deal of time with his beloved Godmother, Mrs. Victoria Jordan. He was married to the late Josephine Dixon Jones. From that union were born nine children.

He began his education in the Nansemond County Public Schools. He left school at an early age to help provide for his family. Mr. Jones enlisted in the United States Army on March 23, 1951, and served as a Corporal, seeing combat during the Korean Conflict, all while continuing to help provide for his mother and younger brother. Mr. Jones was honorably discharged from the Army on Dec. 26, 1952. In civilian life, Mr. Jones was a master brick mason. His work can be seen in many homes and businesses in Suffolk and the surrounding areas. After many years, Mr. Jones retired from brick masonry.

As a child, Mr. Jones joined and was a faithful member of Balm of Gilead Baptist Church. Mr. Jones accepted the Lord later in life, having been influenced by the Godly witness of his beloved wife “Josie”. He joined New Paul’s Temple Holiness Church of Deliverance, where he was faithful in attendance until his health prevented him.