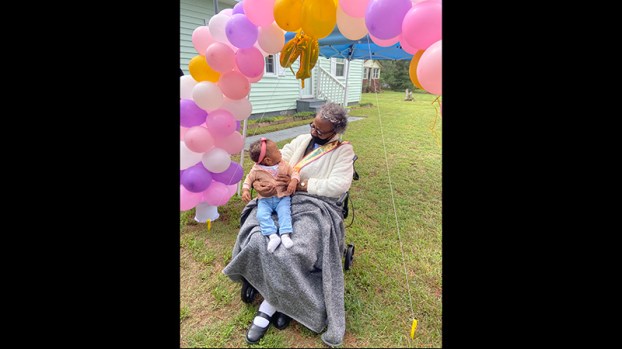 The matriarch of six generations celebrated her 100th birthday with a special drive-by visit from those who love her.

Friends and family of Eugenia Eason met at Lakeland High School with cars covered in balloons, signs, and banners. They departed to drive past the home of the matriarch and wish her a happy birthday.

“Y’all are too nice,” Eason said, wiping away tears as countless friends, nieces, nephews  and cousins stopped to wave and wish her the best on her monumental birthday.

Eason was born Sept. 19, 1920, to Augustus and Martha Eason, who died when she was still very young. Her older siblings raised her in old Nansemond County. Eason attended Florence Graded School, which is now Florence Bowser Elementary School. She retired from Planter’s Peanuts in August 1983 after 28 years of hard work.

She was involved in her community as she supported her church, the Driver community and the Nansemond Parkway Civic League.

Eason is a member at Tabernacle Baptist Church, where she accepted Christ at a young age and was baptized at 13. Eason was very involved as she served in many areas. She was a lead singer in the senior choir, which could be heard on Sunday mornings over WRAP and other radio stations. Eason also loved Sunday school, served as missionary president and member of the church’s senior group Silver Strands, and helped the Women’s Day Committee.

“She has really accomplished a lot in her life,” said JoAnn Mitchell, Eason’s youngest granddaughter. “She was always a very hard worker.”

When asked her secret to longevity, Eason claimed she didn’t have any. Her family, however, attributes it to her hard work and being surrounded by generations of people who love her and feel blessed to know her.

Metropolitan Baptist Church held a giveaway to help the community and build relationships. The weather cleared out in time for... read more