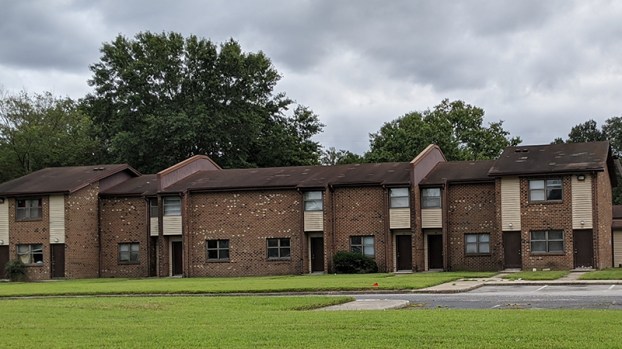 The Parker Riddick Apartments will soon be demolished and rebuilt, while the nearby Cypress Manor Apartments will be substantially rehabilitated in work that is set to begin within weeks after closing on the project is complete, which Suffolk Redevelopment and Housing Authority Executive Director Tracey Snipes expects to be in early October.

City housing projects on pace to begin next month

The Suffolk Redevelopment and Housing Authority is close to beginning work to revamp a pair of public housing communities, but it is awaiting building permits from the city and needs to close on the project before it can begin.

Executive Director Tracey Snipes told the authority’s board during a Sept. 22 virtual meeting that plans for the Parker Riddick and Cypress Manor apartments have been submitted to the city and approved. “We are now at a point of getting applications for the building permits,” Snipes said. “They have been submitted … but we did end up having to re-do them because it showed the Stacey Drive address, and it needed to … reflect our new addresses.”

Stacey Drive has been renamed White Marsh Pointe Drive, but the permits for the project need to reflect the new name of the road in Parker Riddick.

Snipes said she expects to get building permits for the new construction Sept. 24, and then close on the project in early October.

“It’s probably going to get into October, but the early part of October, because that is the only step that we’re waiting on,” Snipes said.

In August, Snipes said that the authority needed to close on the project by Sept. 15 to avoid any penalties, but she said in a Sept. 24 phone interview that the authority received an extension from the federal Department of Housing and Urban Development until around Oct. 20.

The 93 units at Parker Riddick will be demolished and rebuilt, while the 113 units at Cypress Manor will get a substantial rehabilitation. They will be converted into Section 8 project-based voucher assistance housing. The two apartment complexes were built in the 1970s as market rate housing, which the authority acquired to provide 206 units of subsidized public housing.

Parker Riddick residents received Section 8 vouchers to use for other housing while the work is ongoing. The Section 8 housing choice voucher program, which the authority administers, is a federal program to help low-income families, the elderly, and those who are disabled to afford decent, safe and sanitary private housing.

At Cypress Manor, residents have been shifted to other units of that complex since that work will be done in phases. There, the brick frames of the units will remain intact, though Peter Behringer, a managing member of TCG Development Advisors, previously told the authority that the asbestos abatement there will conform to state and federal requirements, but would not completely eliminate it.

Snipes said the five buildings in Cypress Manor that are vacant will be the first to undergo a gut rehabilitation within weeks after closing on the project. At Parker Riddick, the first step will be to put up fencing around the vacant buildings to prepare for their demolition.

Council initially approved issuing the bonds in August 2019, but per Virginia code and regulations from the U.S. Department of the Treasury, it required a public hearing to be held a year after council’s initial approval, and for council to vote again on the issuing of the bonds.

The housing authority’s board held a public hearing at its July virtual meeting, at which time it adopted a resolution confirming that it was authorizing the bonds.

The work had been expected to begin over the summer, but delays in the permitting process have slowed the start of the work, which is expected to take roughly two years to complete. A January status report on the project noted that the first section of Eagle Landing would be ready within five months, and groups of buildings would be ready roughly every four months after that until the work is finished.

Commissioner Regina Hall said residents in both communities have told her the project is moving slower than they would like.

“The ones I’ve talked to … say they don’t see the process coming along as fast as they would like,” Hall said. “But those who have moved out from the Parker Riddick side say they are excited to be out in the community.”

Commission chair Quinton Frankin said the authority is working as fast as it can to begin the work, noting that he had just signed bond revenue documents related to the closing of the projects.

“We’re not dragging our feet,” Franklin said. “It’s just a process, and we’re trying to get it done as fast as we can.”

Snipes said a lot of progress has been made on getting the project to the starting line in spite of the coronavirus pandemic.

The Mills E. Godwin Courthouse in downtown Suffolk closed at noon Wednesday and will stay closed through at least Friday... read more