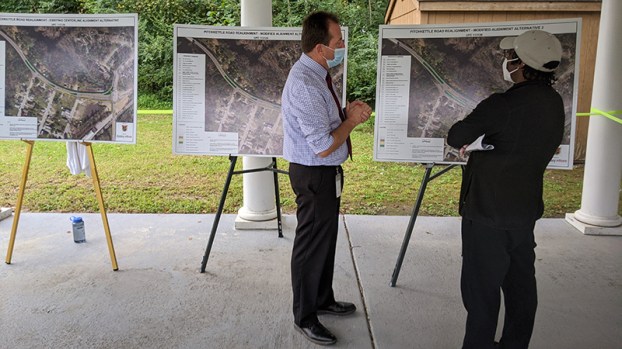 City and design officials on hand at the public meeting for the $7.7 million Pitchkettle Road realignment project heard concerns about its potential effects on nearby properties.

During the Sept. 24 outdoor meeting at Saint Paul Church, about 40 residents got a look at three possible alignments for around a 2,500 foot stretch of the road that is slated for improvement from the intersection of Pitchkettle Road, Prentis Street and Constance Road to the Lake Meade Bridge. Currently, that stretch of the road is two lanes and undivided, and it connects the U.S. Route 58 Bypass on the west side of the city to the downtown area.

The upgraded and realigned road is expected to increase capacity at the intersection with Constance Road and Prentis Street.

One alternative has the realignment following the current road alignment, Hansen said, noting that when coming off of Lake Meade Bridge toward the Boston community and the intersection at Constance Road, the speed limit lowers from 45 mph to 25 mph and drivers come into a narrow, hard turn.

“It sometimes feels like a rollercoaster when you’re watching people go through here,” Hansen said.

This design would not have as many right-of-way impacts with property closer to the bridge, but as the road winds toward the intersection at Constance Road, there are impacts to the property to the north of the road, Hansen said.

He also noted that the road has no lighting, median or place for people to walk in the Boston community where the realignment is proposed.

Another design option, known as Alternative 1, shifts the realignment of the road away from its current design. Hansen said it straightens up the road a bit, but “it still has somewhat of a sharp curve” coming off the bridge into Boston and wouldn’t be to design standards. However, he said it allows for some preservation of properties located closest to the bridge.

The other design option presented at the public meeting, Alternative 2, straightens out the road more.

“This is what we would probably consider to be the ideal alignment,” Hansen said, “because it does get rid of the harsh curve. However, we’ve heard some feedback from citizens that live in this area that they’d like to preserve their houses.”

Alternative 2 also creates a cut-through road between McKinley and Lincoln avenues. Hansen said feedback has been favorable on this aspect of the design. He added that others have concerns about protecting their property and property rights, but he said it would be harder to do under this design.

With the current alignment being a hard left turn onto Pitchkettle Road, Hansen noted that traffic backs up when a train comes and backs up traffic on Constance Road.

“We think that’s going to be a big feature just to ease some congestion in this area,” Hansen said.

The project has been in the works for several years. The project would also provide curb and gutter improvements, as well as add an asphalt path and concrete sidewalk. It is likely to take until at least the fiscal year 2024 or 2025 until work would be completed, Hansen said, though he noted the project schedule “is a little bit nebulous” due to state funding issues, as revenue sharing has been put on hold until the General Assembly works through budget issues.
He said the city wants to take the feedback it has received from the public, turn it into an approved design within a year to 18 months, and then be ready to acquire right-of-way. The city, he said, is trying to find the right design for the road that meets the community’s needs.

The Virginia Department of Health has closed part of the Nansemond River for shellfish harvesting due to a raw sewage... read more