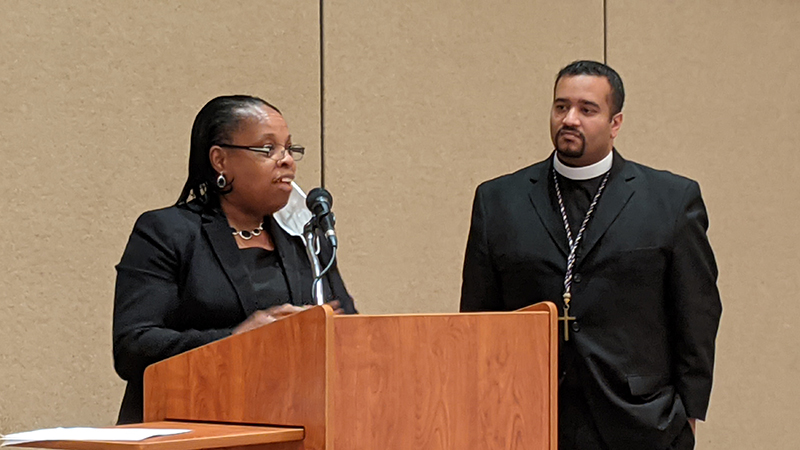 Following up from its march through downtown Suffolk in June, a group of ministers from the Suffolk Leadership Council met to answer a key question and outline its priorities going forward in pursuing equal justice and policy changes.

A group of about 40 ministers from city churches, led by Ben Fitzgerald of Zion Community Church and Bishop A.S. Hall Sr. of Balm Church, East Campus, met Sept. 26 at the Hilton Garden Inn Suffolk Riverfront, inviting interim Suffolk Police Chief Al Chandler and Administrative Capt. John McCarley to take questions. Fitzgerald and Hall said more than 100 ministers were interested in attending, but they had to limit the gathering due to COVID-19.

“The march was great,” Fitzgerald said. “I think there was a lot of ‘Rah, rah, rah.’ But the question is, where do we go from here?”

The ministers began the planning process for a handful of priorities they want to hammer home to city leaders and police. Fitzgerald noted the importance of the June march through downtown to highlight Black justice issues, especially with the more than 1,000 people who turned out at personal risk to themselves due to the coronavirus pandemic, but he said it was time to get ahead of any potential problems in the city.

“Now for the naysayers or those who feel that this is unnecessary because Suffolk is such a great place, and we may not have the problems that we’re experiencing in other places, we think it’s important not only to show solidarity with people across the country,” Fitzgerald said, “but I think all of you could agree that we don’t get in front of this, Suffolk could turn into a place like we’re seeing across the nation.

While members of City Council, including Mayor Linda T. Johnson and Vice Mayor Leroy Bennett, turned out for the June march, Fitzgerald said it was deliberate that no politician be invited to the luncheon, as he said it was not the intent to make their actions political.

Ministers asked Chandler and McCarley about police policies, including the idea of establishing a Citizen’s Review Board to investigate allegations of police misconduct. Fitzgerald said he wanted this to be one of the four or five actionable items from the ministers. He said the board would be made up of civilians representing a cross-section — and be representative — of the community, and could come from each of the city’s boroughs.

McCarley said there would have to be a measure of understanding of police procedures by members of the board. Fitzgerald agreed, saying just like he had an orientation when he joined the Suffolk Redevelopment and Housing Authority board, there should be one for a Citizen’s Review Board also.

The ministers also asked about getting more Black officers to serve in Suffolk, diversity training for officers, body cameras and community policing.

Chandler said Suffolk Police is required to undergo 40 hours of training every year by the city, and 40 hours every two years by the state Department of Criminal Justice Services, which includes diversity training that has been taking place since around 2000. Officers are also trained in areas of mental health and crisis intervention.

The interim police chief noted that Suffolk Police have had body cameras so long, they’re already on their third set. Officers who don’t turn on their cameras when they are supposed to are written up, he said. Chandler said there are other measures in place to help officers with this. When officers open their car door, their body camera, and every body camera within 30 feet of that vehicle, turns on automatically. Also, if an officer unholsters his or her gun, the body camera automatically comes on. The department bought a Signal Sidearm that goes on the officer’s holster and begins recording 30 seconds prior to activation.

It has helped when residents have brought up issues, but it has also helped in officer training.

“The officers love it, because it has actually cleared them from so many complaints,” Chandler said.

Dr. Dwight Nixon, pastor of St. Mary’s Church of God in Christ, said the November elections are critical in terms of bringing about change.

“We are the leaders of the city, and we have to use our influence,” Nixon said.

McCarley said following the death of George Floyd in Minneapolis, Minn., and the resulting protests he re-evaluated his desire to be a cop, but ultimately decided to continue. “Being a Black officer right now is really, really tough.”

“We have to be here. We have to talk. We have to find a way or a solution to make these inroads,” McCarley said. “We have to bring down those barriers with City Council, councilmen (and) mayors. We have the power to change that with a vote.”

Chandler addressed numerous questions from ministers, noting what mechanisms trigger the activation of officers’ body cameras, hiring practices of the department and programs to engage teens.

“We have to get to the point where we’re willing to talk about the end of the story,” Chandler said, “and what I mean by that is, so many times, we see a headline and we make a decision based on that headline. And we said, OK, this is what happened, and the police were wrong,’ and then you find out later on — and I’m not talking about nationally, now. I can bring this home — where somebody says the police did something wrong, and we’re instantly accepting of that information.

“So when the whole story does come out, nobody’s listening. Nobody’s sharing that 1,000 times, so we’ve got to get to the point where we actually follow the story to the end. Then we find out that a lot of things when we were afraid of are not actually what we thought.”

Besides policing, ministers also addressed issues with neighborhood crime and blight, as well as getting out in the neighborhoods surrounding their churches and staying involved. Ministers also asked about textbooks and equity issues in schools.
“We can’t go and hide,” said Pastor Anita Lewis of God is Real Ministries. “We’ve got to come out and make ourselves available.”

Said Hall: “I believe that this can work if we focus, and we be committed and consistent every time they see us. They know we (will say) the same thing until they do what we ask them to do, until we see some kind of reform or some kind of change.”