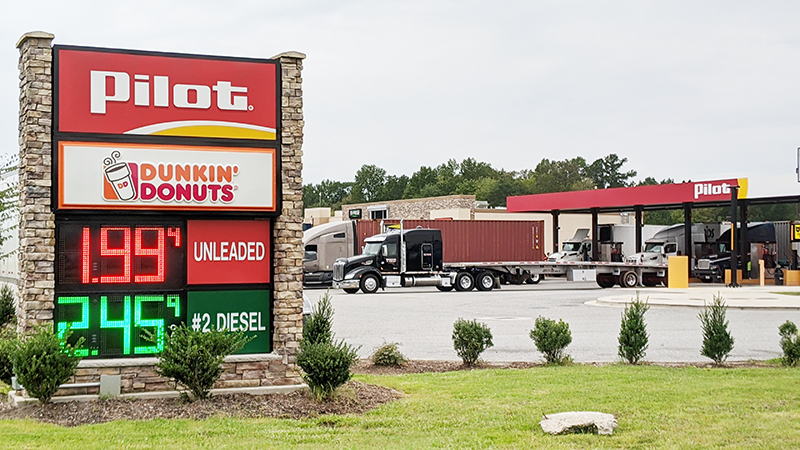 The Pilot/Flying J Travel Center on Holland Road has a new owner with big plans, and they’re already laying the groundwork for growth.

“Our family-run operation, we’ve never made an investment this big,” Hermie Sadler said. “And so, that’s how we are in the location and in the plans we’re going to have, including Pilot and Shell and Dunkin’ Donuts and the other people that we’re going to try and bring in. It’s a beautiful facility, but in our opinion, it’s just not finished, and we want to finish it.”

CHN LLC bought the 5.6 acres from Pilot/Flying J owner Jimmy Haslam, who owns the NFL’s Cleveland Browns, and the rest from a private land owner. Sadler said he began talking to Haslam in fall 2018 about buying the Suffolk truck stop. Being smaller and family-run, Sadler said their company is primed to make improvements in a way that wasn’t able to happen previously.

“We feel like that area of Suffolk, just with all the traffic between (U.S. Route) 58 and the Port (of Virginia), there’s just a lot of traffic in that area,” Sadler said. “We think the location has a lot of potential.”

Sadler said he has been speaking with city officials for the past couple months on plans to add 300 truck parking spaces with a newly-paved, well-lit lot. Currently, the property has just 17.

“We’ve got to get the trucks to be parked over in a secure, designated parking lot to get all that truck traffic away from the building after they fuel,” Sadler said, “because what’s happening now, they pump a lot of fuel there, but the drivers don’t have time to come inside and buy food and eat food and buy snacks and drinks, and those kinds of things, because there’s always somebody waiting behind them to fuel, and there’s nowhere for them to park.”

He said it would also improve the store’s visibility from Route 58 for people traveling through the area.

Adding those spaces is just the first of three phases he expects to take about three years to complete, at which point he hopes to have the extra truck parking spaces, restart the deli and kitchen, then add retail like what Sadler Brothers has in Emporia — places like Five Guys, Quiznos and the FoSho sports bar — turning it, Sadler said, into “a little retail city.”

He said the additional property would allow for four or five different retail operations, whether it’s fast food, a truck shop or a truck wash.

“Having the ability to park 250, 300 trucks there every night makes it much more desirable for other retail opportunities when you’ve got a captive audience of … trucks on your property every night,” Sadler said. “If you provide the truck drivers with a nice, clean facility with ample parking that they know they can get to and plan their day to end it in Suffolk to park overnight, then we can easily get more inside sales and more tax revenue for the city of Suffolk.”

Sadler said the company’s investment is its biggest to date, but it highlights the confidence it has in growing the site’s footprint and revenues for his company, and for the city. He said there is untapped potential to provide added amenities for truck drivers, tourists and city residents while adding 15 to 18 jobs.

“This is an exciting opportunity for our company,” Sadler said. “To be able to expand our company in a market like Suffolk and strengthen our relationship with Pilot at the same time is big for us.”

Sadler, who raced in NASCAR for about 20 years and also was an announcer with Fox for 15 years, said the immediate focus in Suffolk will be to expand truck parking and food options inside the location, which will be operated by Sadler Brothers Oil Company. His family has been in the convenience store and truck stop business for decades, and Sadler himself had been at it part-time for about eight years before diving in full time since last November.

The Suffolk location will stay a branded Pilot dealer location, which is the fourth partnership between Pilot and Sadler Brothers, along with locations in Emporia, South Hill and Dunn, N.C. Shell/Motiva will be the gas supplier in Suffolk as it is at the other three locations.

The transition to the new ownership takes effect Oct. 1.

The first step is to get the proper zoning and conditional use permits needed to expand truck parking on about 15 of the acres.

Factoring in delays with COVID-19, Sadler said the company is looking at a six-month timeline to get those things in place, then another six months to build the lot — 12 to 16 months, Sadler said. Then it would proceed with the additional work on the property.

“Our job is just to come in there and, first of all, try to sell ourselves and our concept to the city of Suffolk,” Sadler said, “so that they’ll help us develop that whole stretch of land there into something that the city will be proud of, as will we.”