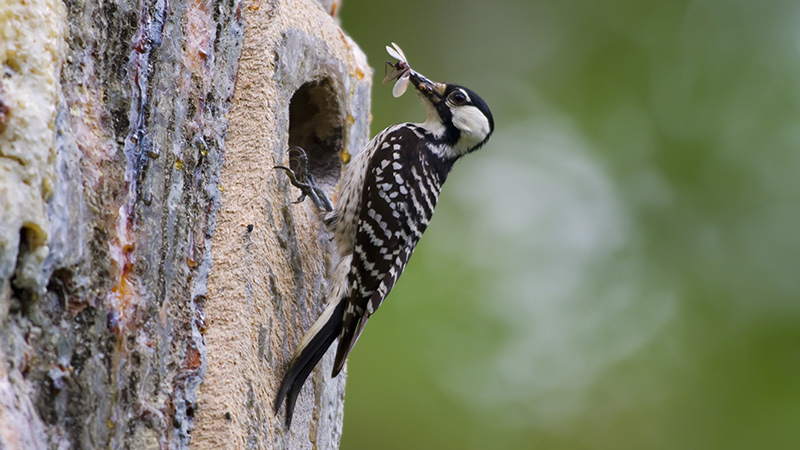 The red-cockaded woodpecker’s status is expected to be changed from endangered to threatened. The bird was reintroduced to the Great Dismal Swamp National Wildlife Refuge in 2015. (U.S. Fish and Wildlife Service)

The status of the red-cockaded woodpecker, reintroduced to the Great Dismal Swamp National Wildlife Refuge five years ago, has improved and is progressing toward what officials hope will be an eventual removal from the Endangered Species List.

The federal government has proposed downlisting the woodpecker from endangered to threatened, highlighting conservation work at locations across the United States, including the Great Dismal Swamp.

“While recovery is the ultimate measure of success of the Endangered Species Act, thanks to innovative conservation efforts and a deep commitment by diverse partners across its range, we are one step closer to that goal … for the red-cockaded woodpecker,” said U.S. Fish and Wildlife Service Director Aurelia Skipwith in a statement. She visited the Great Dismal Swamp earlier this year.

Still an endangered species, the red-cockaded woodpecker had last been seen in the area of the swamp about 45 years ago before being reintroduced to it in fall 2015, when young pairs were captured from a South Carolina population and brought to a habitat within the refuge that had been especially cared for so as to be as close to ideal as possible for the birds.

That ideal habitat includes a pine savanna with only tall pine trees for them to forage on and only short vegetation under the trees.

Several more pairs of birds were brought to the refuge in fall 2016, resulting in nine pairs, but of those 18 birds, just five remained on the refuge in spring 2017. Later that spring, there was successful breeding, as refuge officials found a pair of nests.

There have been three successful breeding seasons for the red-cockaded woodpecker in the Great Dismal Swamp since 2015 — in 2017, 2019 and this year. Meagan Racey, a spokeswoman  with the Fish and Wildlife Service, said it had relocated two pairs of woodpeckers from the Piney Grove Preserve in Sussex County to Great Dismal Swamp this season, and it is preparing to relocate another pair from the Francis Marion National Forest in South Carolina in November.

In 2020, all three nesting attempts were in natural cavities, which can take the birds up to five years to excavate in live pines. Artificial cavities had been put in initially — four to a cluster — to encourage new birds to establish territories and ultimately breed.

The spring headcount this year indicated the potential for three breeding groups out of a population of 10 birds, though only two nests were successful. Three young woodpeckers were banded in the swamp in May — two females and one male, the first since the 1970s.

“The red-cockaded woodpecker has been a keystone in our agency’s threatened and endangered species efforts,” said Ryan Brown, executive director of the Virginia Department of Wildlife Resources. “Supporting its recovery and longleaf pine habitat has been a prime example of what partnerships can achieve. We are proud to continue to work with other government and private organizations to promote the conservation of this species.”

The red-cockaded woodpecker had been abundant from New Jersey to Florida, west to Texas and north to Missouri, but its range had gone down to just a handful of states by the 1960s following more than 100 years of habitat loss.

In the late 1970s, there was an all-time low of an estimated 1,470 clusters of the woodpeckers. Currently, the Fish and Wildlife Service estimates that there are nearly 7,800 clusters ranging across 11 states from southern Virginia to eastern Texas.

For the past 10 years, the U.S. Forest Service has partnered with more than 30 public and private organizations focusing on bringing back the woodpeckers’ preferred habitat of longleaf pine forests through the American’s Longleaf Restoration Initiative and the Million Acre Challenge.