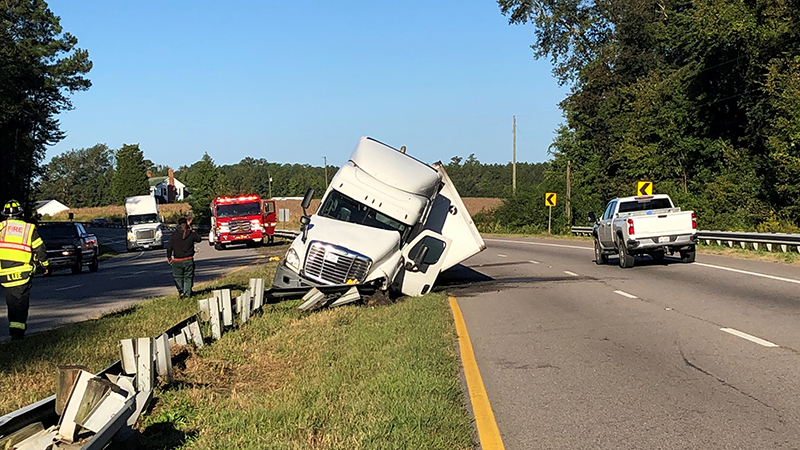 A truck crash on Holland Road Thursday morning spilled diesel fuel into a nearby stream. (City of Suffolk photo)

An overturned tractor-trailer and hazardous materials spill have closed part of Holland Road.

The Suffolk Police Department and Suffolk Fire & Rescue crews remain on the scene of the single-vehicle accident on Holland Road between Pioneer Road and Chappell Drive. They received the call at 8:23 a.m. Thursday.

Preliminary investigation found the truck left the roadway and overturned in a ditch. There were no injuries, and the truck was not carrying a load.

A diesel fuel tank was observed leaking, and the product was initially contained to the ditch in the median. When the truck was up-righted, the fuel tank ruptured, and fuel was released onto the roadway and drained into the ditch that then discharged into a stream in the area. A private hazardous material cleanup company is currently on scene, along with a representative from the Virginia Department of Environmental Quality.

The eastbound lanes of Holland Road in that area are expected to remain closed for an additional several hours as hazmat clean-up efforts continue. Public Works crews are placing detour signage in the area.