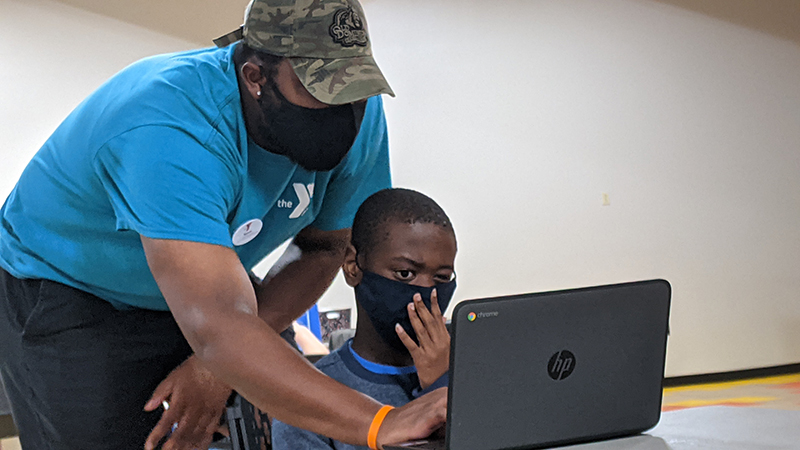 Brevin Parrish, an academic coach with the Suffolk Family YMCA, works with Damien Lowe, 12, at the facility’s eLearning Academy, which has around 90 students from pre-K through middle school. Y Youth Development Director Vici Treat said it is adding staff to work with younger students.

The Suffolk Family YMCA has never had so many people on its wi-fi network at one time, but it has held up for the 90 students who take part in its eLearning Academy this fall.

On a recent morning, a group of middle school students was on one side of the facility’s youth center — all with masks and many with headphones on — as they sat in front of their laptops at tables spread out in the room participating in virtual learning. Most sat either alone at a table or two to a table. For tables with three students, partitions were on the tables to divide students.

On the other side of the center, another group of first-grade students was alternating between virtual learning on their laptops and quiet play.

“We’re here to give them the space, to help them mentally to get through e-learning because it’s definitely something that the kids are getting used to, too,” said Vici Treat, youth development director at the Suffolk Family YMCA. “And it breaks my heart. Almost every single afternoon, we have a couple of kids who still have all this work to do, and it’s 3 o’clock and the only thing they want to do is play. They don’t want to keep working and they’re just done with it for the day.

“They’re mentally drained, and that’s what I’ve talked to the counselors about is just keep these kids’ spirits up as much as possible. They’re going to go down. There are going to be days when they’re like, ‘I’m not doing this. I don’t want to do this. Don’t make me do this.’”

While they do not force any of the kids in the academy program to do the work, they do talk with them about how to deal with it.

“We try to coach them into, ‘OK, what is it about your work that you’re afraid of doing, or that you don’t want to do,” Treat said, “and then getting to the bottom of why they don’t want to do their work or whatever it is.”

In some cases, they’ve had to call parents after a child’s virtual learning is complete for the day to check that it is OK for them to give their children a break and allow them to finish their work later.

The program, which is also available at all other YMCA facilities in South Hampton Roads with COVID-19 keeping many school divisions closed for at least the first few weeks of school, has students from pre-K through middle school spread out in the facility. Most Suffolk students are in virtual learning for at least the first nine weeks of the school year.

Thirteen people currently work in the academy program, and about five more are in the hiring process and are expected to start next week, primarily to work with the younger kids. With more staff coming on, she said they can handle some more children for parents who are interested in the program, and there is still more space in other parts of the facility that can be converted into space for the academy program.

Some students — kindergarteners, as well as second, third and fourth graders — are upstairs in one of four rooms, while some of the younger students were spread out inside other enclosed rooms, including a pre-K group that spends time during the day in Treat’s office. The facility’s gym can also be converted into space for the eLearning Academy if necessary, and it also makes good use of the pool, playground and outdoor space.

Treat said she didn’t expect to have so many children in the program just a few weeks into it.

“That was really a thing where it was like, ‘Oh man, are we going to have the wi-fi capability to actually handle all these kids,’” Treat said, “because we’ve never had to do it before.”

She said having that capability is important for them, especially with students who have to be live with their teachers for their classes.

“It’s one thing when they’re watching a YouTube video, which they do too, but then it’s another thing for them to be on live virtual learning and having to make sure that we’re able to do that for the kids because at the end of the day, they’re very reliant on us right now just because they’re not able to be at the schools.

“We’re very fortunate enough to have all these kids here. The parents are super grateful for it.”

Treat said it has the facility’s counselors and academic coaches working in the eLearning Academy.

Academic coaches, unlike the counselors, do not stay with a specific group of kids all day. They instead are helping kids getting their work done or providing extra help that parents have requested.

“We don’t do any sort of instruction or anything like that,” Treat said. “We do leave that up to the teachers. But if they raise their hand and say, ‘I need help with two-plus-two,’ we are able to help with that kind of stuff.”

Brevin Parrish, one of the academic coaches, said he enjoys working with kids of different age groups. On a recent morning, he could be seen bounding from one side of the youth center to the other. One moment he was working with first-graders, and the next he was over giving one-on-one attention to a middle school student.

“I’m just trying to reassure them that this is school and that it needs to be taken seriously,” Parrish said, “and just help make sure that they’re doing OK and they are OK.”

Parrish said he feels comfortable and safe in the YMCA, which like every child care and K-12 school setting in Suffolk and the Western Tidewater Health District — including Franklin, Isle of Wight County and Southampton County — has not seen any COVID-19 outbreak.

“Everybody has their mask on, so it’s very safe,” Parrish said. “We take our sanitation very seriously.”

Students coming into the YMCA have their temperature checked daily and are screened for COVID-19 symptoms. They are also required to wear masks in larger group settings, and staff must wear them at all times. If there are three students to a table, they will have a small partition to separate them.

Staff is also wiping tables with a disinfectant throughout the day, and there’s a deeper cleaning after students have left for the day.

The eLearning Academy will continue even after students begin returning to their respective schools. Treat said there are several contingencies based on how Suffolk Public Schools reopen for face-to-face learning, and that it would remain open and would still have its before-and-after school programs.

While there have been challenges and changes since the beginning of the school year and with the rollout of the academy program, she said students have adapted, teachers have worked with them and parents have been understanding of the issues involved. As an example, she cited the start of the virtual learning day, when all students are logging onto their Chromebooks at the same time. In the beginning, that was a challenge to get 90 kids logged on at the same time. Now, as soon as a student arrives and is screened, they are logged into their class, even if it’s a bit early.

And Treat had nothing but praise for her staff, and others at the YMCA who have been flexible and accommodating in adapting the program to the students’ needs.

“This is something that is not only new for all of the kids, the parents and the teachers, but it’s new for us too,” Treat said. “And we’re just trying to do the best that we can with what we have, and I’m super proud of my staff. They’ve really stepped it up and just rolled with the punches, and have just done what they needed to do to get it done.”