A kiddie parade to show community 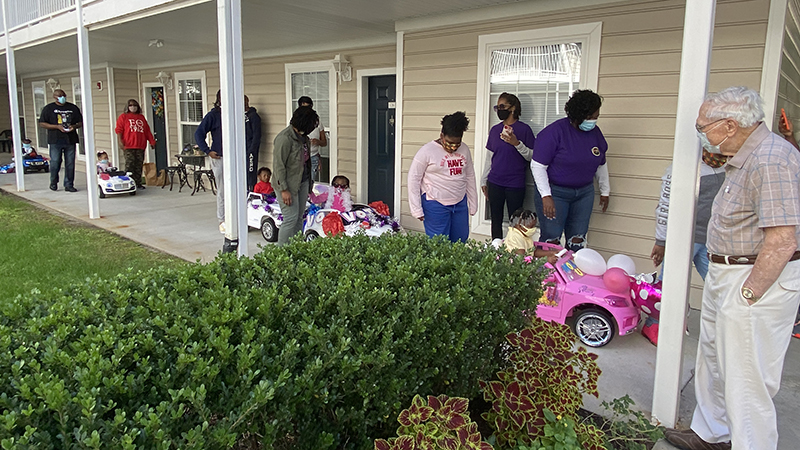 Kids ages three to six paraded around The Commons at Centerbrooke Apartments with The Mount Suffolk Church, who also provided groceries and live music.

An exceptionally small parade took place at a Suffolk retirement center to give the residents a smile and a blessing.

On Oct. 3, a group of 3- to 6-year-olds paraded in decorated, battery-powered cars to give groceries to the residents living at The Commons at Centerbrooke Apartments.

The Mount Suffolk Church and Cut in His Image Ministries, led by Pastor Karl Wilkins, took the afternoon to serve a part of the Suffolk community. The children took a lap around the bottom level of the outdoor common area before delivering groceries to the residents. Each car had decorations, including balloons, streamers and messages. Sponsors hosted some, some had messages to promote voting or The Mount at Suffolk Church, and some were decorated for individuality.

The Mount at Suffolk Church’s worship band played in the middle of the commons during the event. There was also Paw and Prayer, where church members would pray with residents who have pets.

“We really wanted to do something to warm the hearts of the community during this time of pandemic and hurt and confusion,” said Wilkins. “The whole idea of church is to take it outside of the four walls and change lives. I think today we saw community.”

The Commons at Centerbrooke Apartments is a retirement community for those ages 55 and above. The COVID-19 pandemic has impacted these residents in negative ways. Some are immune-compromised and have lost some of the freedom they are used to, while others that still worked prior to the pandemic have been out of work.

“I am so excited about this,” said Christel Hoy, property manager at The Commons at Centerbrooke. “It is a blessing that they are able to get groceries, love, and encouragement today.”

CDC guidelines were followed to the best of everyone’s ability. As the children paraded on the bottom level, many seniors took the opportunity to watch from the balconies above. This gave them a better view of everything, as well as kept the proper distance. The event was also outdoors to give everyone a chance to space out and get fresh air. Gloves and wipes were in use when necessary as well.

“It is just adorable,” said Jeanne Groves, a resident at the Commons at Centerbrooke. “I have been looking forward to this all week.”

According to Wilkins and Hoy, this is the beginning of many more events for the residents at The Commons at Centerbrooke.

“It is great they’re giving back to the community and teaching youth to respect their elders,” said Hoy. “This intergenerational mix is good. They both can learn a lot from each other.”