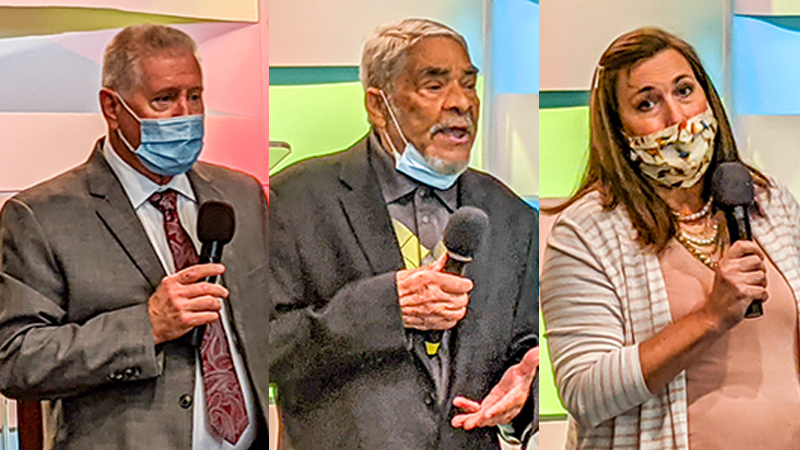 Two incumbent City Council members and one challenger, all running in separate races, answered questions on several topics, including governance, redistricting, education, policy and race relations for about an hour during an Oct. 3 forum.

Fawcett, who has been on council since 2012, said he wants to continue to serve the city, saying that Mayor Linda Johnson has been “a dedicated helper in getting us moving in a forward direction but there’s a lot of initiatives yet that are still unanswered that we are going to work on in the very near future.”

Wolfe said she wouldn’t be running if she was fully pleased with leadership in North Suffolk.

“We have basically outgrown ourselves with development,” Wolfe said. “We need to catch up  with our development and our growth in Suffolk.”

She said public safety should be well-funded and said that with a child who has graduated Nansemond River High School, schools are important to her also.

Milteer noted his experience with 10 consecutive terms on council. He said when someone in his borough has an issue, he likes to take them to meet with the city manager to have the issue addressed.

“I still will continue to do nothing less,” Milteer said. “It has been a deep pleasure to have served this length of time.”

On redistricting, Wolfe said every resident should be included in how the city redraws its boundaries. She said boundary lines should not be drawn to favor incumbents, and they should be equitable for all residents.

“The lines need to be drawn based on how the commission is going to set that forward,” Wolfe said. “The past has shown us that when elected officials get involved with redistricting, the Supreme Court can step in and change it. We need to do it right the first time.”

“The redistricting is based on racial composition — black and white,” Milteer said. “We have three safe seats for Afro-Americans. I’m hoping that we will remain to have three. … I’m not sure about the racial composition, but I think the citizens should have some input on the matter. The Department of Justice has now let the City Council make the final decision, and we should let the people be involved.”

Fawcett said in the last redistricting in 2010, it was controversial from a city and a Department of Justice standpoint, saying there may, or may not have been, an intent to shift an incumbent from one borough to another. He said more than one map should be considered, and that one option doesn’t give “a real true sense of how everybody perceives it.”

“I want it to be fair,” Fawcett said of redistricting. “I want the boundaries to be fair. I want everybody to be considered. I have no problem with public input. I think it’s fantastic anytime we can get public input.

“The council is not going to be the one and only decision on this redistricting. It will only come to us after all the components are there and we will certainly have a chance to look at it. I think it will be well done, and it’ll be well thought out. I’m hoping that there’ll be nothing more than fairness in the process.”

In choosing a new city manager, Fawcett said the person should be honest and have integrity, energy and charisma to be able to help with issues large and small. He praised former City Manager Patrick Roberts for the work he did for the city.

Wolfe said she hopes a new city manager will represent the diversity of the city — from the developing North Suffolk area to the historic downtown and rural farm areas — and that the person will work on behalf of residents.

“I would like to see a city manager that has experience with emerging cities of small population and large land mass that have somewhat outgrown themselves like we have to help come in and help support our infrastructure and our schools and our public safety,” Wolfe said.

Milteer said Roberts is the seventh city manager that has come and gone since he has been on council. He said Roberts was a good manager, but said other qualified candidates are out there, also. He wants to find a problem solver for the position.

With regard to high water bills, Milteer joked that when he sees a faucet running, “I run and cut it off.” He said the city should have its own water supply rather than relying on other localities. Milteer said the city should buy lakes and run pipes from those lakes to the treatment plant.

“I think that we need to become water independent, where we have our own water and treat the water and sell it to the customers for a lower rate,” Milteer said.

Wolfe said inaction will not fix the problem with high water bills. She said there needs to be a survey of residents and look at the city as a whole.

“Your water bill should not be $800 because you’re working from home and your children are learning from home,” Wolfe said. “But our citizens are given that answer.”

Fawcett noted the use of CARES Act money to help with utility bills.

“We’re going to continue to look at this,” Fawcett said, though he noted there’s no “silver bullet” to fix it.

Wolfe, speaking about education, said the city and school division should look at sharing  services. In that way, she said money could be used to hire teachers or to provide a better education for students. Milteer also said there are more ways for council and the school board to work together. He suggested that the city and school division could go in on buying gas together. Fawcett said there should be serious conversations about stretching resources and getting more resources into the schools for students and teachers.

Milteer said he supports having a civilian review board as “an ideal thing to prevent anything that isn’t being carried out (by police) as it should be.” Fawcett noted that Suffolk Police officers all have body cameras, and said he had no problem with such a board as long as it is known what kind of scope and parameters it would have, and how the decision-making process would go.

Fawcett said his record shows achievement, and that it’s not about him, but the people of the city.

“We’ll continue to make Suffolk better than what it is,” Fawcett said.

Milteer said he’s going to have one more go-round on council, and that this would be his last time running.

“I’ve been on City Council, and I’ve won 10 elections,” Milteer said. “I’m seeking a final one now. No matter which way the voters decide, it’s going to be final.”

In saying why she should be elected, Wolfe said she would listen to everyone, is a problem-solver and would build coalitions to get things done.

“We need to have an open voice for everyone,” Wolfe said. “There needs to be equity in the city  to include women, and it’s very important to have that diversity on City Council. So far only  three women have ever been elected to City Council. I would like to be your fourth.”