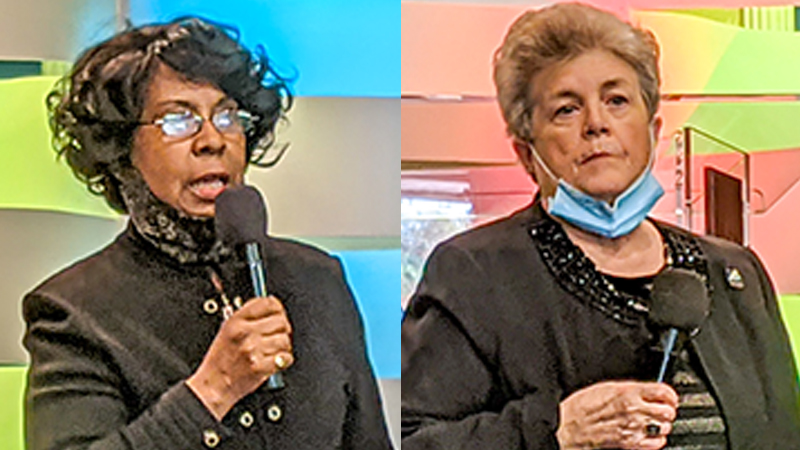 Judith Brooks-Buck and Phyllis Byrum attended a forum on Oct. 3.

Two of the four candidates on the ballot for School Board outlined their views and took questions during an Oct. 3 forum sponsored by the Suffolk Coalition of Black Pastors at Living Waters Christian Center.

Byrum does not have any ballot opposition, though she does have a write-in opponent in Valerie Barnes, while Brooks-Buck will face off against Andy Hilton.

Byrum and Brooks-Buck each received five minutes to outline their views and why they are running for re-election, and then they took several questions from attendees.

After outlining her background in education, Byrum said she and Brooks-Buck have worked tirelessly for the city’s public schools.

“We have worked diligently together, and we want to continue what we have started,” Byrum said.

Byrum stressed that she has worked with Whaleyville Borough Councilman Curtis Milteer, along with the mayor, city manager and council on many projects. She said her goal is to achieve equity for all students in the city.

“I want it to be so that every child, whether you live on Great Fork Road, where I was born and raised, or whether you live in northern Suffolk,” Byrum said, “that each of us have the equal opportunity to all of the experiences in what education can bring. Education is truly the key to success for our city. I believe that.”

She noted working through the coronavirus pandemic has been a trying time for everyone, but she believes everyone can work together to get through it. Byrum said every child should be guaranteed equal opportunity, and work on modernizing its aging schools, noting that its feasibility study “has been put on hold a bit” due to COVID-19.

“We are looking at our building and facilities,” Byrum said, “how we can make all children have the same technological advantages, the same educational experiences, and that’s what it takes in this city.”

She said she is in favor of replacing schools that have been in the city since she was a student —  schools such as the current John F. Kennedy, John Yeates and Forest Glen middle schools, whose buildings opened for high school students in the mid-1960s.

“We have aging facilities, and we need to do something to address that,” Byrum said. “It’s going to take the concern of our citizens to make sure that this occurs.”

Byrum also stressed she wants to continue to hire and retain highly qualified administrators and teachers.

“Once we get them here, we want the best, and we want to keep the best,” Byrum said.

Brooks-Buck also spoke of her experience in education, as a special education teacher and as a college professor at Hampton and Virginia State universities. She said negative perceptions of Suffolk Public Schools are not accurate.

“What you’ve heard about Suffolk schools is not true,” Brooks-Buck said. “There are two things, and that’s why I say, ‘Let’s change the conversation about Suffolk.’ That’s the first thing in my platform. … We have excellent schools in Suffolk. We have dual-degree programs, we have children who go to school in Suffolk, go to Paul D. Camp (Community College), graduate with an associate degree, go to college for two years and have a bachelor’s degree. That’s one of the things we do.”

“So when I hear people talk about how badly they’re doing and what we’re doing, I’m just confused,” Brooks-Buck said.

As part of her platform, Brooks-Buck said she wants to continue working with state and federal legislators about public education.

“I realize that while we are battling here about some things, we get a little bit confused with minor things,” Brooks-Buck said, “where we’re looking at the ants who are biting at our ankles, when we need to be slaying some dragons. The federal government owes us a lot of money that they have not paid school systems all over the country for special education.”

She said the city is being “cut short” with the federal reimbursement that it should be getting for educating children in special education.

Brooks-Buck and Byrum addressed a question on naming schools. Brooks-Buck said if a school is replacing a historic school, it would receive the same name. But if it is a new school, then there would be a naming committee. Byrum also said they want to take stakeholders into consideration when naming a new school.

The candidates also addressed a question about virtual learning, with Byrum noting that with the leadership of Superintendent Dr. John B. Gordon III, Suffolk Public Schools was ahead of some other area school divisions, especially with ensuring that all of its students had their own laptops. Byrum said the division would focus on health and safety first, but added she understands the best learning occurs in the classroom.

“Virtual learning is a big concern for all of us,” Byrum said. “We know it’s a new adjustment for parents, it’s a new adjustment for our teachers, our staff and the whole community. But I think we’re working through this. It takes time, and it takes energy to work out the kinks, so to speak. I’m hopeful that looking at the data, that we will soon be able to phase back into school.”

Brooks-Buck said that, having been a teacher in some capacity since 1971, one of her biggest concerns is the difficulty of online learning, noting that she would much prefer to be teaching in person. However, she said she would rather have students stay home and struggle now and then work with them after it is safe to return to school and catch them up, than to risk someone’s life.

“I’d much prefer being in the room with you, working with you,” Brooks-Buck said. “But if some decision I made caused you to lose your life, I could not live with myself.”