At the Corps of testing during pandemic 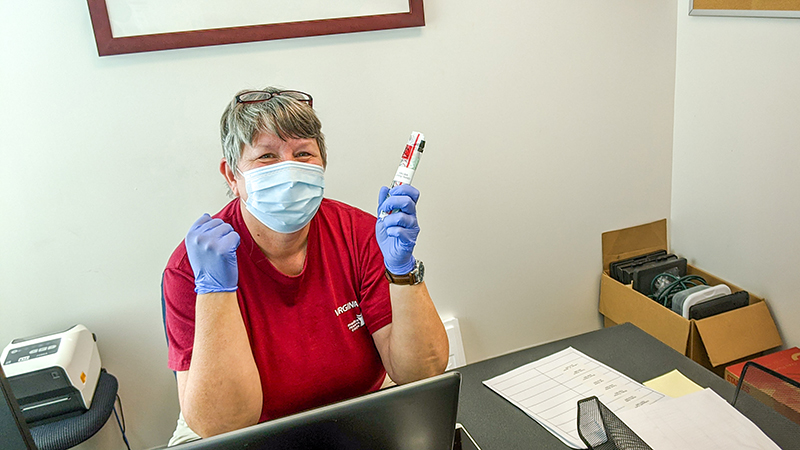 Robin Jones of Suffolk has been a volunteer with the Virginia Medical Reserve Corps for about three years and has played a key role in COVID-19 testing.

Sandra Ruiz said she couldn’t just stay home and do nothing as the coronavirus pandemic began raging in the United States.

Ruiz, who used to work for the health department in Suffolk, also worked in hospital settings, including at Sentara Norfolk General Hospital. She thought her experience could be of use when she decided to volunteer in April for the Virginia Medical Reserve Corps, part of the Virginia Health Department.

The volunteers, working in a satellite office on the Southampton Memorial Hospital campus on a recent morning, have played critical roles in freeing up staff, especially in the Western Tidewater Health District, so that it can keep the clinics in a region that spans Suffolk, Franklin, Isle of Wight County and Southampton County.

“I just couldn’t stay home doing nothing,” Ruiz said. “Just watching CNN, I couldn’t do that.”

According to Medical Reserve Corps coordinator Connor Smith, the volunteers free up the staff to operate the clinics rather than coordinating and conducting the myriad COVID-19 testing that has taken place since March.

“Before we developed our Medical Reserve Corps testing team,” Smith said, “we had to put the clinics out of service for nurses to come and do swabs. As we started developing the team, it’s opened up our clinic sites.”

Smith said the Western Tidewater’s Medical Reserve Corps — one of 22 around the state — is one of a few in the state still doing regular testing events, though they have been phased down in October, as the health district is testing by appointment only on Mondays and Fridays at the hospital’s satellite office.

It is also one of the smallest such volunteer groups in the state, Smith said. The Western Tidewater Health District’s Medical Reserve Corps has 200 volunteers among the 13,000 volunteers statewide.

“We’re producing well beyond our scope,” Smith said, “which is exciting, at least, for Western Tidewater.”

At this point in the pandemic, Smith said the health district’s Corps has about 50% of its volunteers participating, which he said was tops statewide.

In people-hours alone, Smith said the Corps volunteers have given more than $65,000 in added value, and by having volunteers at COVID-19 testing events, they have saved about $20,000 per event that the health district would have had to pay for a private organization to do the same work, according to health district emergency manager Will Drewery.

Robin Jones, who like Ruiz is from Suffolk, used to be a women’s health nurse practitioner and had also been a midwife before getting involved with the Medical Reserve Corps about three years ago, about a year after her mother died. She is also an emergency medical technician with the Isle of Wight Rescue Squad.

Jones has volunteered with the Corps in an educational role, helping with flu shots and setting up shelters for natural disasters if needed, and, in this year especially, playing a key role in COVID-19 testing — doing everything from set up to take-down of testing sites, and administering the tests and preparing them to be sent to the labs.

Both Ruiz and Jones have volunteered for more than 100 hours and have been deployed more than 30 times during the pandemic.

Being heavily involved in COVID-19 testing, some of her interactions with people have frustrated her.

“We’ve got some guidelines out there and people think it’s not going to affect them,” Jones said. “‘I don’t need to wear a mask. If I want to go to a party, I’ll go to a party.’ It frustrates me.”

Ruiz has seen many people coming for tests with major anxiety, families that have come for testing, only to come back for testing a few weeks later and hearing from them that a loved one has died.

“You do have sympathy for everybody,” Ruiz said. “But you do what you can do, and just teach them. It’s a process of teaching them how to take care of themselves.”

Ruiz said many people who come in for testing do not understand how the virus is transmitted and are not taking proper precautions to ward off the virus. And Jones reminds people that the test given by the Corps — the PCR, or polymerase chain reaction, test — is only a snapshot of whether they have COVID-19 on that day.

“It’s just having something to do and helping other people,” Jones said. “If you’re in health care, you’re there for the people. When you’re retired, you don’t really retire.”

For Ruiz, her role as a Corps volunteer gives her purpose.

“I enjoy being with other people. I think it helps me right here,” said Ruiz, pointing to her head, “you know, to keep my mind going, and I’ve always liked being around people, knowing that I can go to sleep at night knowing that I have helped somebody.”

Said Smith: “We keep asking for more, and the volunteers have been remarkable.”