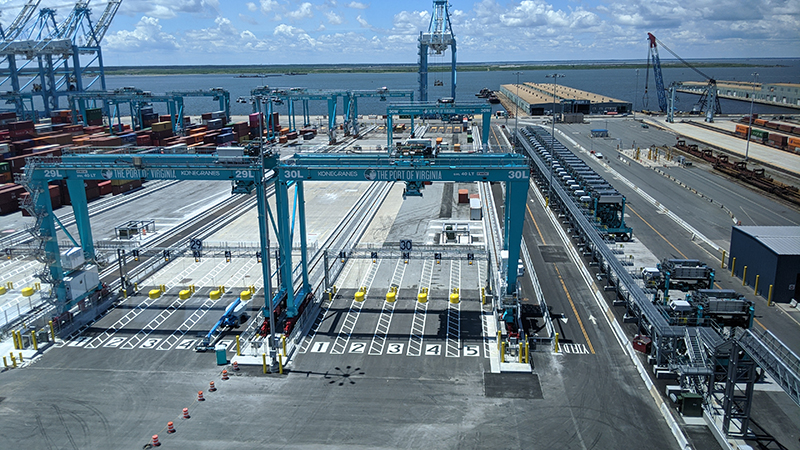 The Port of Virginia will receive more than $20 million in federal grant money to finish its central rail yard expansion project at Norfolk International Terminals.

The money builds on previous port investments at its two largest terminals — NIT and Virginia International Gateway — to allow for expansion of on-terminal rail capacity at NIT.

Specifically, the $20,184,999 in federal Port Infrastructure Development discretionary grant money through the Department of Transportation will support the building of two new rail bundles with four tracks each, adding about 10,700 feet of working track. The project would also provide for a center working area for transferring and staging containers.

For example, the project would reduce truck miles traveled by 2.45 million, translating into

Sens. Tim Kaine and Mark Warner said in a joint statement that the money “will support an important expansion at the port that will increase the port’s competitiveness and efficiency and allow it to continue to serve manufacturers and farmers in Virginia and across the country.”

Warner noted in an August letter to Transportation Secretary Elaine Chao that the project would reduce truck miles traveled by 2.45 million and reduce congestion and emissions, save time for motor carriers and increase safety.

“An expansion of the NIT CRY is critical for the Port of Virginia to ensure it can keep pace with forecasted rail growth and maintain its expected level of service to the Midwest, Ohio Valley, and other inland markets,” Warner said. “Without this investment, the Port’s export capacity would be constrained, limiting U.S. manufacturers and farmers’ access to the global market.”

As a major gateway for inland and midwest markets in the U.S., 34% of the cargo processed at the port comes and goes on rail — a higher percentage than any other East Coast port.

As part of the project, associated lead-in tracks will include turnouts and switches from the terminal’s main rail line and vehicle crossings, and it will have a return access road to separate rail dray traffic coming into the container yard from general truck traffic.

Virginia’s congressional delegation signed onto a letter to Chao in May in support of the project. In August, Warner wrote her to stress his support of the money for the port.

“This project would have significant economic benefits for Virginia and the manufacturers and producers across the country that rely on the Port to deliver their products around the world,” Warner wrote in his August letter. “The Port’s rail project will also have significantly positive transportation, environmental and safety impacts that are worthy of consideration.

Warner’s August letter noted that the port had requested $25 million that would be matched by about $19 million in state investment for the $44 million project.

In July, Gov. Ralph Northam announced the state would give the port $14 million to buy two new electric ship-to-shore cranes at NIT and add electric containers tractors, with the port adding another $10.1 million.