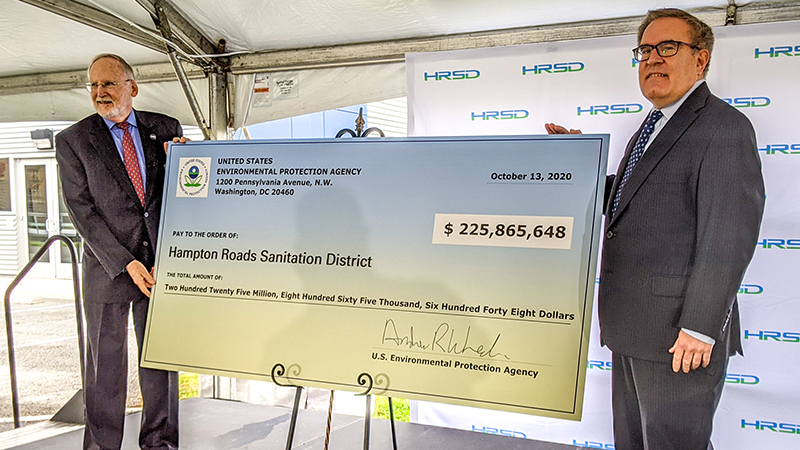 The Hampton Roads Sanitation District has received a $225 million federal loan that will help pay for the first major water reuse program on the East Coast.

The Environmental Protection Agency’s Water Infrastructure Finance and Innovation Act loan, along with the Virginia Resources Authority and the Clean Water State Revolving Fund, will support the Sustainable Water Initiative for Tomorrow, which uses water reuse technologies to replenish the overdrawn Potomac aquifer, the largest source of groundwater in eastern Virginia.

The loan, announced Oct. 13 outside the HRSD Nansemond Treatment Plant and SWIFT Research Center in North Suffolk, is part of a $1.048 billion master loan agreement to support more than 40 water quality improvement projects over the next 13 years, the loan money coming at a 1.42% interest rate. The loans, by statute, are 49% of the $2.2 billion in project costs.

HRSD Commission chairman Rick Elofson said ratepayers would save $300 million in financing costs over the next 30 years of the loan.

HRSD submitted its letter of intent to apply for funding during the fiscal year 2019 funding round, according to EPA spokeswoman Molly Block. HRSD submitted its application March 27, and the loan closed Sept. 28.

EPA Administrator Andrew Wheeler said that with water scarcity a national issue, and with a growing city like Suffolk, 40 of the 50 U.S. states can expect a freshwater shortage in the next decade. With growth, he said, comes more demand for freshwater.

The projects are expected to improve the water quality of the Chesapeake Bay by cutting surface water discharge of treated wastewater, or effluent, by about 100 million gallons per day by 2032.

It will also supply a sustainable, and increased, source of groundwater to the Potomac aquifer, prevent saltwater contamination there and help mitigate land subsidence, which is a gradual settling or sudden sinking of the Earth’s surface due to aquifer withdrawals.

In an interview, Wheeler said too much water is being taken from the Potomac aquifer, and it is causing a backfill of saltwater from the ocean. It is also causing land subsidence because the aquifer is getting too low. He said the work would restore the aquifer to provide eastern Virginia for future generations.

“What it will do is it will treat used water and then pump it back into the aquifer at a very deep depth in order to restore the size of the aquifer,” Wheeler said.

He compared it to what is happening in Israel, which recycles more than 85% of its water, while the U.S. recycles less than 20%.

“We need to do a much better job of recycling and reusing water,” Wheeler said.

A letter of intent that the HRSD filed in June 2019 with the EPA noted that the projects would include upgrades to existing wastewater treatment facilities, installing groundwater recharge and monitoring wells and building new SWIFT treatment and conveyance facilities.

About 20 projects across the HRSD service area, Wheeler said, would be a part of the first WIFIA loan that will go to building wells “to add high-quality water back into the stressed Potomac aquifer.”

Wheeler said the $225 million WIFIA loan will help finance roughly half of the $460 million in project costs, saving HRSD $72.4 million compared to typical market financing in this project phase. The project is expected to create more than 1,400 jobs.

He said the $1 billion master agreement would allow multiple WIFIA loans to be executed under a single agreement, which Wheeler noted would “increase efficiency, save everyone time and save ratepayers $300 million over the life of the loan.

This is the second WIFIA loan in as many years that targets improvements to the Chesapeake Bay. Last year, Baltimore received a loan for a new water sanitation project.

The WIFIA loan program, created by Congress and beginning three years ago, is a way to finance large water infrastructure projects at below-market interest rates.

Wheeler termed the loan a way to get the last bit of financing for projects so they can begin construction.

“It’s not seed money to start a project,” Wheeler said. “This is the final financing amount that they need to get these projects ongoing.”