School Board to look at renaming Pioneer Elementary 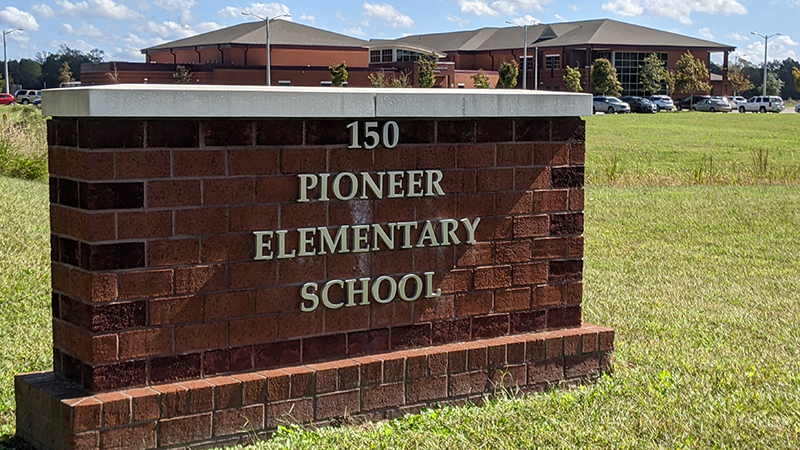 The School Board is set to hear public comment on renaming Pioneer Elementary School. (File Photo)

The Suffolk School Board will look at the possibility of renaming Pioneer Elementary School and schedule a public meeting to get feedback from the community.

Board member Tyron Riddick broached the subject during its Oct. 8 meeting, saying that he had received a letter from some residents about renaming Pioneer to Southwestern Elementary School. He asked for a town-hall type forum for residents to weigh in, stressing that no decision would be made before getting public input.

According to board policy, public input is mandatory, but appointing a committee is not required.

One way to get that public input, Waller said, would be through a public hearing.

Pioneer Elementary, which opened in 2014, began with students from the former Southwestern Elementary, as well as 16 from Booker T. Washington Elementary and 24 from Elephant’s Fork Elementary.

In June 2013, the board at the time voted 4-3 in favor of naming the school Pioneer Elementary, with members Enoch Copeland, Dr. Judith Brooks-Buck and Lorraine Skeeter preferring to name the school Southwestern Elementary, which was the recommendation of a naming committee at the time. Then-board members Phyllis Byrum, Linda Bouchard, then-chairman Michael Debranski and Diane Foster voted in favor of the name change.

Brooks-Buck, during the Oct. 8 meeting, recalled the choice by the committee to name the new school Southwestern Elementary, but said one person spoke before the board against the committee’s recommendation, leading to the vote in favor of naming the school Pioneer Elementary, one of three choices presented to the board.

Meeting minutes from the June 2013 board meeting do not name the other two choices, and do not indicate who spoke against naming the school Southwestern Elementary.

“It left a lot of very hard feelings,” Brooks-Buck said, “because people felt that if we were going to use a committee, we should follow the committee’s recommendation like we did with (Col. Fred Cherry Middle School). If we did not want to follow the committee’s recommendation, we should have just named the school what we wanted to name it in the first place.”

Brooks-Buck said if there is a way to work that out through having a public meeting, she would support that, whether the name gets changed or not.

Riddick said Pioneer “was a replacement school” for Southwestern and to rename Pioneer to Southwestern “is a way to restore over 94 years of rich history for the people in that end of town.”

He said while the former Robertson Elementary School in Whaleyville was turned into a recreation center, Holland residents got nothing after Southwestern closed there, as the school was torn down shortly after the city bought the building that housed it.

Some board members said at the time that the now-named Pioneer Elementary was replacing two schools — Southwestern and Robertson — and that a new school needed a new name.

However, Robertson had been closed for two years at that point.

Robertson at that time had 190 students and the highest utility bill per square foot of all the city’s schools.

The Robertson PTA president at the time, Joan Harville, said she wished that Robertson had been left in the Whaleyville area, while current School Board member and former Southwestern Elementary principal Lorita Mayo, who represents the Holy Neck Borough, said she was “very disappointed in the outcome.”

“We really want a school in our community,” Mayo said at the time. “That’s been our goal the whole time — to keep the school in the community.”

Picking the name Pioneer for the school was a reflection of the street name beside the school — Pioneer Road.

In 1924, education began on the site of the old Southwestern Elementary when the Nansemond County Training school for Black students was built using money from Sears, Roebuck and Co. leader Julius Rosenwald, who put up seed money to pay for building schools for Black students in the rural South.

In 1956, a new building was built and, eight years later, the name was changed to Southwestern High School, which graduated its last senior class in 1970. At that time, students were transferred to then-Forest Glen and John F. Kennedy high schools, and the school had students from grades 4-7.

In a June 12, 2014 story in the Suffolk News-Herald, J. Harold Faulk, president of the Nansemond County Training School/Southwestern High School Alumni Association, said the name of the new school was appropriate.

The current board debated when to hold the public meeting, with Brooks-Buck favoring a delay until after the November board meeting, while Story suggested waiting until at least January. Riddick motioned for a public meeting on the renaming to be held in November, with a report to the board in December, with the board voting 5-2 in favor of the motion. Byrum and Story voted against the motion.