A parade as prayer for long-time youth coach 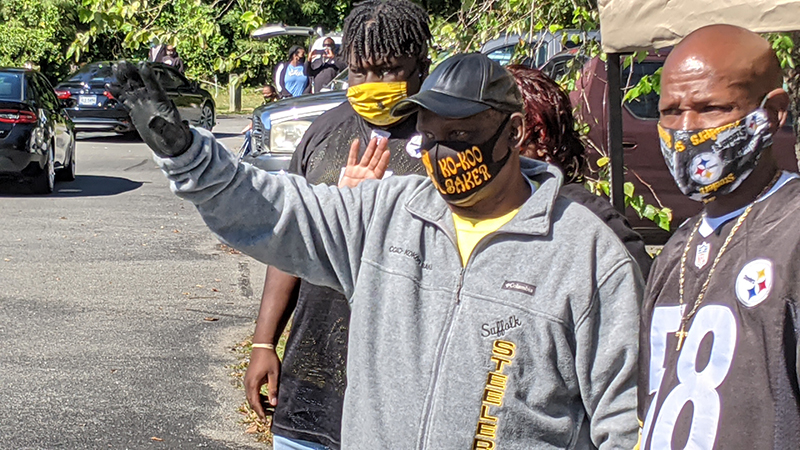 The parade in honor of David Baker, known to many as Ko-Koo, was more like a prayer for a man of conviction who, by most every account, has given much to the youth and residents of the city..

Cars streamed through Cypress Park Pool for about 45 minutes, waving and honking their horns during the Oct. 17 parade to show their love for the co-founder of the Suffolk Steelers youth football team, as they gave him and his wife, Jennifer, gifts, flowers, shouts and smiles.

In the park, many took to a microphone to offer their memories and share his impact on their lives, and the lives of so many people in the city.

It was something wholly unexpected for Baker, who was diagnosed with pancreatic cancer in February. His heart and soul, he said, has been working for the youth and people in the city.

It’s got to be quite a thing to see the outpouring of love and support from the community, someone told him.

“While these are still open,” Baker said, pointing to his eyes. “It was a blessing. Ain’t ever seen anything like this. I didn’t know they loved me that much. But they did.”

He said it has been rough since the diagnosis, but he is showing improvement.

Even as he’s been getting his treatment, he has empathy for younger people in there with him.

Those like former Steeler Terrence Warren, who played for Seattle, San Francisco and Jacksonville in the NFL, and Donald Hill-Eley, another former player for Baker and current coach at Alabama State, spoke in loving tribute of Baker.

Hill-Eley recalled being a child and playing football in the street, and having Baker ask him to play on his team. He told Baker he didn’t have the money for the registration fee. That didn’t matter, and from that point, Hill-Eley was playing football.

Now with a doctorate degree, Hill-Eley said having an education afforded him opportunities. He said Baker was instrumental in that. He also provided them with a vision for their future, correction when they needed it, and he lived as a man of character.

Warren recalled advice Baker gave him on and off the field.

“Everything I do, I think of the lessons you taught me,” Warren said, “and I apply them to my living.”

Six years after he graduated from John F. Kennedy High School in the city, Baker, along with Alexander Holland and Benjamin Johnson, founded the Suffolk Inner City Youth Athletic Association. In 1985, it became a member of Pop Warner Youth Football. Baker worked for Newport News Shipbuilding for 32 years before retiring in 2009. Baker is also the current president of the East Suffolk Federated Civic League — which presented him with an award of excellence — and a past vice president of the Hollywood-Jericho Civic League.

“We appreciate you, especially your heart,” the plaque from the East Suffolk Federated Civic League stated.

Many others also shared their memories of a man who helped shape their lives, Mayor Linda Johnson presented him with a certificate of recognition, and former councilman Charles Brown called for the field in the park to be named after Baker.

Hill-Eley said that whenever he walks onto a football field, he thinks of the Suffolk Steelers, and the vision his coach helped provide for him.

It’s a feeling shared by many on the sunny afternoon as they shared how they felt about Baker.

During the procession, a DJ played uplifting gospel music. One of the songs, “We’re Blessed,” seemed especially fitting.

And as the cars of people streamed into the park, and the words of love flowed from the many who took to the microphone, and from those who spoke to Baker privately, they wanted to thank him, to let him know that they, too, were blessed.