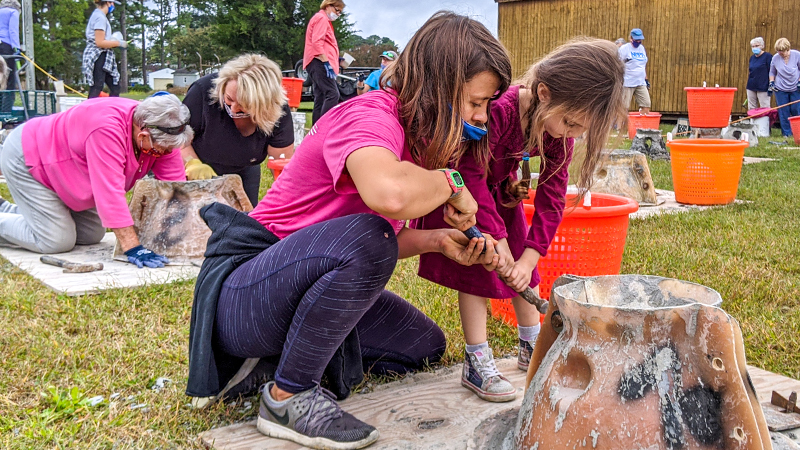 Kati McCarter, left, with the Chesapeake Bay Foundation and Marilena Badamo help make reef balls that will go into the Nansemond River next spring to help with oyster restoration.

A reef ball is nothing like your typical ball, but if all goes well when they go into the Nansemond River next spring, the oysters will cling to them and there will be more of them.

The Chesapeake Bay Foundation, partnering with the Nansemond River Preservation Alliance and working also with the Nansemond Indian Nation and the GFWC Junto Woman’s Club, spent three days last week making about 70 concrete reef balls that will be taken by boat and then placed in the river and in Bleakhorn Creek, a tributary of the river. More than 30 volunteers came out to make the reef balls, including about 20 from the Junto Club.

“I can assure you none of them have ever done anything like this before,” said Elizabeth Taraski, president and chief executive officer of the preservation alliance.

Most of the reef balls will be placed in the mouth of the river, and there’s another site further up river off of Bennetts Pasture Road. The timing of their placement is to ensure that the water is warm enough and when oysters are spawning, or making baby oysters that can swim around and find the reef balls to permanently attach to them, according to Jackie Shannon, Virginia oyster restoration manager for the foundation.

The groups will look for hard, sandy bottoms to prevent sinking, or areas experiencing erosion and where oysters are already growing so they can expand their population naturally with more surfaces to attach to. They will be deployed in shallow water and exposed at low tide, though they will be away from navigational channels.

Some of the areas in which the reef balls will be deployed include the property of preservation alliance members, according to Taraski.

“This is going to provide us with the opportunity to expand using different substrates,” Taraski said, “and CBF was looking for locations in order to do this. … We’re all learning and we’re all coming together on this.”

Shannon said reef balls are just one way to help improve the oyster population. She said it is working to get permits for some experimental designs. Besides the reef balls, they are going to use four other substrates — or the surface on which an organism lives — such as oyster castles, oyster shells reef/tile discs and oyster catchers, and then compare what works best in restoring the oyster population in the river.

“It’s going to be a great way to help rebound the oyster population, including habitat for other fish and important species in the Nansemond River,” Shannon said. “We also hope to see some effects of the erosion being able to be controlled by these reef balls breaking some wave action, so there are a lot of benefits to having some alternative substrates.”

Shannon hopes the reef balls will be a good demonstration for homeowners who live along the shoreline to use these methods to help the oyster population and protect their shoreline from some of the effects of erosion and wave action.

Oysters start their lives as small swimming larvae for about three weeks, so when the water temperature begins to warm up in the spring, male and female oysters growing naturally will start to release gametes in the water, Shannon noted.

That’s when oyster larvae start to form and after three days, they look for things like reef balls to permanently attach to, as they like a hard substrate that’s close to the inner tidal zone where the tide is rising or falling, where the reef balls will be deployed.

“They’ll be in the sweet spot to receive spat both in terms of where they’re placed and in the timing of the year to basically guarantee we’ll have a population of oysters on these within about six months,” Shannon said.

To make the reef balls as the groups were doing over the three days, it takes concrete — a mixture of a Portland cement, sand and aggregate that cures for about six months so when it goes into the water, it is neutral and not causing any pH change.

“We know this because we also put these into tanks and set them with larvae on top of a barge,” Shannon said. “The point is we can preset them with larvae if we’re not confident they’re going to get a wild set, but what we’ve seen in the Nansemond (River) shows us that it’s a, ‘if you build it, they will come,’ type of scenario.”

While this is the first time for reef balls in the Nansemond River, they have been deployed throughout the Chesapeake Bay, not only by the foundation, but by other groups, Shannon said. They have been used in the Lafayette River in Norfolk and the Piankatank River between the Rappahannock and York rivers in the middle Peninsula.

Shannon is confident of the project’s success in restoring a more robust oyster population and stemming the tide of shoreline erosion. She said after the reef balls get deployed around April or May of next year, the foundation will know within two to three months after that whether baby oysters are attaching to them.

“In a lot of places, when we go back to monitor these after a year or two,” Shannon said, “there’s so many oysters growing you don’t even see the concrete anymore.”

For the preservation alliance, they want residents to know the beauty of the resources they have in the river.

“The whole goal is not to get to a point where it’s like the Elizabeth (River) is,” Taraski said about one of the Chesapeake Bay’s historically degraded tributaries. “We’re going to prevent that, and we’re nowhere near that. So it’s just to keep on moving forward.”