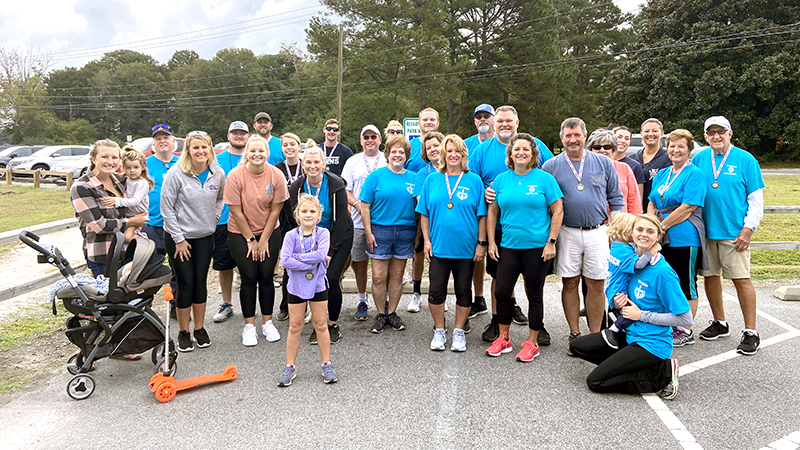 Team Mitch is a strong supporter every year for the StrongWILL Charity Walk and proudly participated in the virtual event. (Submitted Photo)

A local charity walk showed that there is strength even through distance.

The fifth annual StrongWILL Charity Fun Run/Walk was held virtually on Oct. 17. This event is usually held at the Suffolk Seaboard Coastline Trail in Driver during the Driver Days Festival each fall. Due to COVID-19, the festival was canceled, and the run turned virtual.

April Brooks started StrongWILL as a charity for addiction awareness, recovery and support in memory of her brother, William “Doug” West, who died in April 2016 after a heroin addiction battle.

“After his passing, I realized there weren’t many resources around to help with those who struggle with addiction,” said Brooks.

In this virtual event, 100 participants registered and walked separately as individuals, families or teams. Many who participate do so in honor of loved ones who have struggled with addiction, including Team Mitch, which has participated every year in honor of Mitch Lilley, who died in February 2017. Participants will still receive their participation medal, but it will be in the mail.

Brooks wants to use this charity event to raise money and awareness for people dealing with drug addictions. For the past five years, each run was held with a different need in mind. They included helping babies born with addictions, the Suffolk Police Department, and The Youth Challenge of Hampton Roads.

“We try to do a different city and aspect of addiction each year,” said Brooks. “We try to spread out and not just do Suffolk but still keep it local.”

So far this year, StrongWILL has raised around $5,000 for Portsmouth Homeless, for people who are struggling with homelessness and addiction to have a place to stay and get treated. It’s significantly less than the $12,000 raised in 2019, but Brooks is still grateful for what was accomplished.

“I figured even if it wasn’t a lot of money, anything would help,” said Brooks. “If we were having a hard time raising money, I knew others weren’t able to raise money either.”