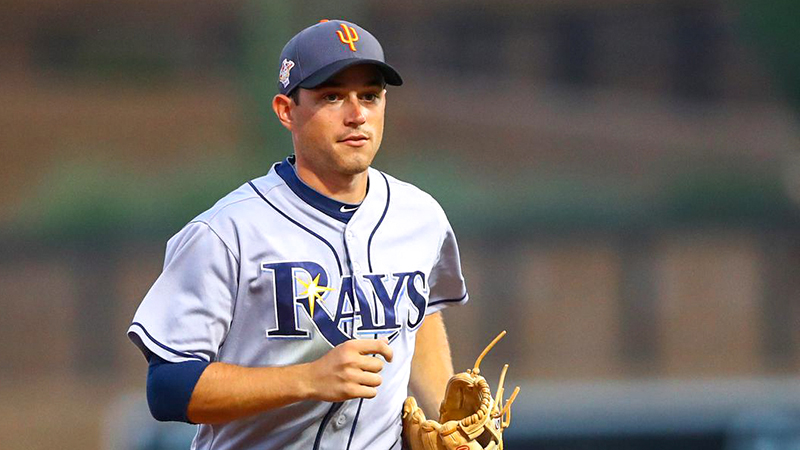 Brandon Lowe, shown in this 2019 file photo, is currently starring in the World Series with the Tampa Bay Rays. (File Photo)

Brandon Lowe has always had a quiet determination on the field.

But with the spotlight shining upon him in Game 2 of the World Series, the former Nansemond River High School standout found the perfect time to shine, hitting a pair of home runs in propelling the Tampa Bay Rays to a 6-4 win over the Los Angeles Dodgers to tie the series.

And though his homers helped break Lowe out of a postseason slump — having gone 6-for-56  and striking out 19 times throughout the playoffs coming into the game — he didn’t seem to lose focus, even if he said otherwise.

“To say that my mind wasn’t going to different places during that kind of struggle would be lying to you,” Lowe said following the Game 2 win. “There were times I wasn’t feeling too good, but that’s what is so great about this team, this coaching staff. As soon as I started dragging my feet, someone was there telling me to focus up and let’s get going.”

Lowe, who plays second base for the Rays, said it was pure joy going back into the dugout after his solo home-run in the first inning, and then again in the fifth when he hit a two-run home run — both to the opposite field for the left-handed hitter. It’s the first time a player has hit two opposite-field homers in a World Series game. Having started his major league career 0-for-19 in the summer of 2018, he is used to streaks, but his current and former coaches note his work ethic and even keel in dealing with them.

“I used to be really bad with it back in college and in high school, and even in pro ball in some of the lower levels,” Lowe said. “I would think about it and take it home with me. But it doesn’t matter if I go 5-for-5 with five home runs or 0-for-5 with five strikeouts. Once I get home, see my wife, it flushes the day. I wake up the next day and prepare for that day.”

Rays manager Kevin Cash noted what he described as Lowe’s mental fortitude to power through it.

“You’re already putting pressure on yourself to do the hardest thing in sports, and that’s to hit a baseball,” Cash said. “And now you’re trying to do it against the best pitching in baseball in the playoffs and the World Series. You’ve got to be tough-minded, and Brandon is.”

Current Nansemond River baseball coach Mark Stuffel would know a thing or two about Lowe’s mental toughness — defining what a warrior is through his strength and unwillingness to give up. Stuffel coached Lowe from the time he was a freshman starter through his senior season in 2012. He helped the Warriors to a 20-8 record during his junior year in winning the Southeastern District tournament title, batting .493. His senior year, Lowe was the district’s player of the year and a first-team All-State selection, hitting over .400 with three home runs, helping the Warriors reach the state tournament for the second straight season and winning the district regular-season title for the first time.

That hard work came during the middle of the coronavirus pandemic while at home with his wife Madison, who he met while playing at the University of Maryland and who is a standout softball player in her own right.

It showed in leading the Rays with a .269 average and 14 home runs and 37 runs-batted-in over 56 games during the regular season. And it showed even through his playoff plate struggles.

But that work ethic was especially apparent after Lowe left college in  2015 and he completely retooled his swing.

“Brandon’s always been a student of the game, so he’s always trying to get better,” Stuffel said. After he got drafted by Tampa Bay, he got with his agent, Hunter Bledsoe, who Stuffel describes as a guru.

“Hunter took a kid who tore it up in high school, tore it up in college, and totally revamped almost everything about Brandon’s swing,” Stuffel said.

The 5-foot-10, 185-pound Lowe never lacked for the ability to hit the ball deep. In a high school game at Harbor Park, home of the Triple-A Baltimore Orioles minor league affiliate Norfolk Tides — he hit a home run off of the scoreboard.

“He’s always had that power in there, but Hunter’s taken it and made him a whole lot more consistent with the power in the swing,” Stuffel said.

His father, Tom Lowe, a math teacher and assistant baseball coach at Nansemond River, described his son as an undersized player who could always hit, but didn’t necessarily look like the prototypical baseball player when Maryland took a chance on the younger Lowe.

With coaching from John Szefc, now the baseball coach at Virginia Tech, and Rob Vaughn, the current coach at Maryland, Lowe was able to grow as a player, and, after his redshirt sophomore season, he was drafted in the third round by Tampa Bay.

The elder Lowe credits his son’s signing with The Bledsoe Agency just outside of Nashville, Tenn., after being drafted as a turning point.

“They’ve changed his body, changed the way he moves to become a valuable piece at a big-league level,” Tom Lowe said. “I’ll give Brandon 100% of the credit because he got drafted, moved away and doesn’t come home in the winters, lives in Nashville, works out religiously.

“It’s been an evolution. He’s not the same kid he was in high school.”

But in other ways, Tom Lowe’s son hasn’t changed.

“He has worked his tail off,” Tom Lowe said. “But he’s really never changed the type of kid he is. He’s still the small-town kid that’d rather be in sweatpants than dressing up.

“He’s still the same great kid, but the amount of work he put in — that’s the one thing I think other people, other kids that are growing up, trying to play the sport, they’ve got to work. It’s a lot of work, and he dedicated to the work.”

Now, his father is more than content to watch his son shine with the Rays.

“We don’t talk baseball,” Tom Lowe said. “It’s just father-son stuff, dad, and how things are going. I mean, he’s way beyond anything I’m going to do with him baseball-wise. I’m there to be a supporter right now, cheer him on, be proud and let him go and do his job.”

Tom Lowe said the response from his son’s former teammates from high school, college and his showcase team have been tremendous.

“Everybody in there has been all about what’s going on,” Tom Lowe said.

Brandon Lowe, who made the American League All-Star team in 2019 in his first full major league season and was the team’s most valuable player this season, has, at just 26 years old, a bright career ahead of him, but whatever streak he’s on — hot or cold — count on him to stay focused and unafraid to put in the work.

After all, it’s what he’s always done.

“He’s a really low-key kid, confident, but he’s not loud,” Tom Lowe said. “He’s very quiet, nice. He’s a grinder. That’s a good word for him. He doesn’t like to struggle, but I don’t think he will take what he does at the plate and have it affect the field, or affect his teammates. He’s going to keep working, and the team showed belief in him. He just kept going.”

It’s something his current manager, Cash, is counting on as the World Series moves forward.

“We need Brandon to be hot and stay hot,” Cash said ahead of Oct. 23’s Game 3. “We’ve seen him go quiet and then we’ve seen him run off a 10-game stretch where he’s the hottest guy in baseball, getting player of the week honors. He doesn’t have to do it for 10 games. He’s just got to do it for maybe five more. We’ll take that. And then he can go as cold as he wants for the next couple of months.”