Walking to break the silence 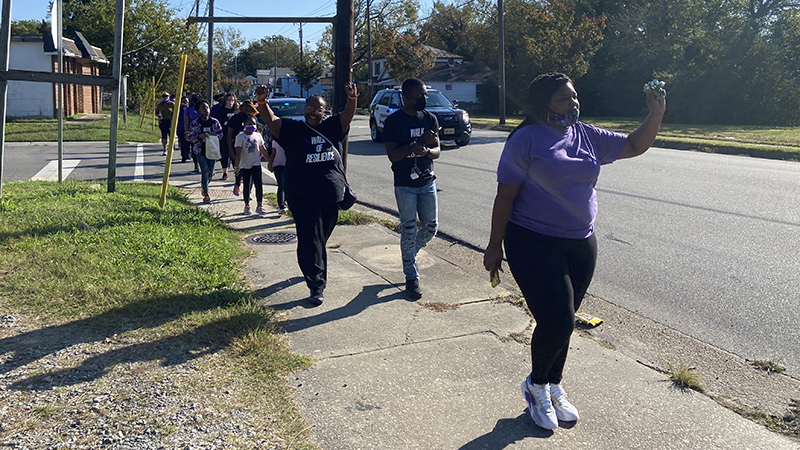 Participants of the Walk of Resilience walked down E. Washington Street from 6th Street to Hall Avenue and back ringing their belled bracelets and bring awareness to domestic violence.

Meeting at Rising St. James early on a Saturday morning, a group with a majority of women came together to bring light to the hidden epidemic of domestic violence.

The morning of Oct. 24, Hey S.I.S.Y. held a walk to bring awareness of domestic violence and kick off the new non-profit located in Suffolk.

Many Bible verses were quoted as reminders that morning. John 16:33, “take heart, for I have overcome the world.” Psalms 139:14, “for I am fearfully and wonderfully made.” Philippians 4:4, “rejoice in the Lord always, again I say rejoice.” Isaiah 54:17, “no weapon formed against me shall prosper.”

This morning reminded women of their worth and let them know that “hey sister, I see you.”  The beginning seminar also educated the participants on what domestic violence is.

The founder of Hey S.I.S.Y. Christie Griffin, started the seminar with a silent PowerPoint. During the silence, a video showed the first-person perspective of a relationship evolving into abusive. Then, statistics from Suffolk and the nation appeared on the screen along with definitions of domestic violence and the different forms it takes, along with resources. Silence filled the room, conveying the silent cries of the broken-hearted.

“What you just received in your hearing was our mission and our vision to what will manifest,” said Griffin. “In this session, we will discuss the secretive yet so open tragedy of domestic violence. We will experience domestic violence through three beautiful, resilient sisters who have all bounced back to what we thought would take us out.”

The first to share her story was the founder of “Dear Sis, You Win,” Shamay Edmonds. She told the story of how she dealt with her abusive husband. She felt like she deserved an Oscar for keeping this secret from everyone she knew while acting like everything was fine.

“In situations like this one, we talk about domestic violence,” said Edmonds. “It hits so deep because so many people go through it, but they scream in silence, they scream with smiles. They say everything is OK.”

Edmonds touched on how many people do not realize they’re in an abusive relationship with a reminder that it’s not always physical but can also be when someone is mistreating you emotionally or mentally. At the end, she was fearful for her life and overcame her situation. Now she encourages others to do the same.

Next to speak was Griffin’s sister, Shenetta Williams. She told her experience while reminding everyone that abuse is about control and not love.

The last speaker was Griffin telling her story. She described how she met her first husband and how their relationship started normal but developed into a toxic relationship that affected her children.

“Throughout it all, the hardest thing I ever had to do was put a smile on my face and act like nothing was wrong, when I was hurting, fighting almost daily, crying for help, yet not a soul came to my rescue,” said Griffin.

These three women laid it all on the line to educate the room on the truth of domestic violence while reminding them to acknowledge red flags, and there is an escape.

As the participants took their walk, they wore a bracelet covered in bells from their goodie bag. These bells were to break the silence as they walked but also stood for something bigger.

“The Bell Bajao is a symbol that we should be our sister’s and our brother’s keeper,” said Griffin. “What you do is if you hear someone in a domestic situation is go and ring the bell. The ringing of the bell lets the actual perpetrator know I hear you.”

The bells could be heard as walkers made their way down East Washington Street and back from Sixth Street to Hall Avenue.