A honey of a legacy 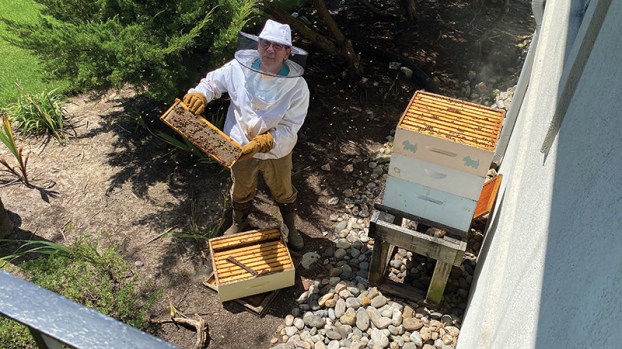 Dr. David Spencer keeps bees at his Respass Beach home. Here, he removes a frame from a hive to show off the bees and honey. 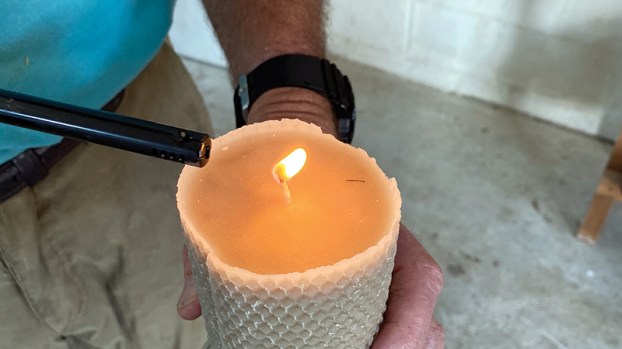 Products from Dr. David Spencer's bees include honey and candles. The candles often wind up as gifts for friends.

When Dr. David Spencer tends his bees in Respass Beach, he is doing more than cultivating honey, encouraging plant pollination and augmenting the diminishing number of wild honeybees. He is also honoring a family legacy.

Spencer still tears up when he talks about his hero in life — his father, Paul Duane Spencer. The senior Spencer passed away almost a decade ago, but his influence on his only son endures.

“My old man was a postman and not, perhaps, the most intellectual man, but he could do anything. As a kid, I learned to plumb, fix cars, build houses and handle electricity — all from him,” Spencer said. “He and I built houses, brick walls and sidewalks. I hated it, but I learned, and I can do them all today.”

The senior Spencer also kept bees. Today, David Spencer still uses some of his father’s apiarian equipment from 60 years ago, combining the older tools with modern technology to tend his hives. Spencer keeps one hive in Suffolk and several more at his cabin in Nelson County. His hives in the mountains produce a honey with a distinctively lighter, less sweet flavor, proving that honey reflects its home source.

David Spencer grew up in the small town of Sebastopol in California’s Sonoma County, with his father’s pragmatic interests and skills balanced by the academic emphasis of his mother, Pat Spencer. A California native, she grew up in rural Canada, riding a horse eight miles to school and nurturing a pet moose. She emphasized the importance of a sound education.

“I knew I wanted to be a surgeon from childhood,” Spencer said, “I took many of the most advanced classes in high school while I also worked as an assistant manager of a men’s shop. I was a straight C student, but I thought that was OK then considering the courses I was taking.”

He graduated from Sonoma State University in 1983 and, lacking the funds for medical school, enlisted in the Navy — influenced again, perhaps, by his father. Duane Spencer had served in the Navy as a hospital corpsman, on board ship and in Korea from 1948 to 1952.

David Spencer served 20 years in the U.S. Navy, graduated from the Kirksville College of Osteopathic Medicine, and completed his surgical internship at the Naval Medical Center in Portsmouth and his surgical residency at the Naval Medical Center in San Diego, Calif. At the encouragement of a close Navy friend and fellow surgeon, Spencer returned to Hampton Roads and the two went into private practice together in 2003.

Since then, Spencer, also a specialist in bariatric and laparoscopic surgery, has been part of several different surgical practices in the local area as well as serving as an assistant professor of surgery at the Uniformed Services University of the Health Sciences in Bethesda, Md., and the Eastern Virginia Medical School. Currently he is with Bon Secours Surgical Specialists and settled in his Respass Beach home — a place, he said, he hopes never to leave.

When he is away from the classroom or operating room, he looks forward to donning a protective beekeeping jacket, round hat and veil and connecting with his memories of his father. As he lights his father’s antique smoker and the fragrant smoke wafts out, he offers a quick lesson on honeybees. The purpose of the smoker, he says, is to replicate the natural environment of a forest fire, encouraging the bees to return to their hive that can host 20,000 to 25,000 bees.

Each bee produces a fraction of a teaspoon of honey, Spencer adds, and while there are more than 500 species of bees in North America, the native bees pollinate but don’t make honey. His bees are honey-producing Italian bees.

Once most of the hive’s bees have settled down, he lifts out the frames, loaded with honeycomb and clustered with bees, to show the bees’ honey production in progress.

When it’s time to harvest, he loads the frames into a manual extractor — also an heirloom from his father — which will whirl the honey from the uncapped honeycomb. The honey drains through several sieves to remove bits of comb.

The result is a thick, amber honey ready to top a tender biscuit.

Spencer goes beyond simple honey, however, and produces other bee-derived products including bars of soap and lip gloss made with beeswax, honey and olive oil.

A sideline business? No, the honey and handmade items are destined to be holiday gifts for lucky friends and colleagues.
Andrea Pizzanello, a surgical scheduler at Bon Secours Surgical Specialists, remembers Spencer rolling into the office with a dolly filled with brown paper lunch bags right before Christmas. As he went from office to office tossing out the bags, the staff realized they weren’t lunch bags after all. They were collections of his bee products.

“It was one of the coolest things anyone has given me,” she said. “And it was from a guy — and a doctor at that!”

The holidays are not the only time he surprises the staff. They have learned to expect the unexpected, including an occasional good-humored prank, from Spencer. They know he has enjoyed a session of river crabbing when he shares blue crabs with them. He is, Pizzanello said, a professional, well regarded surgeon with the playful streak of a 12-year-old boy.

As his hero, Duane Spencer, must have been.