An Eclipse totally of the heart 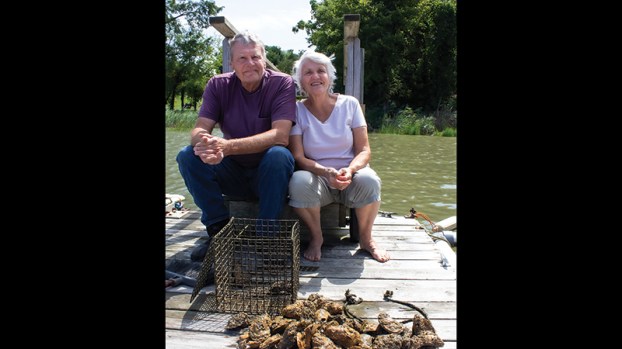 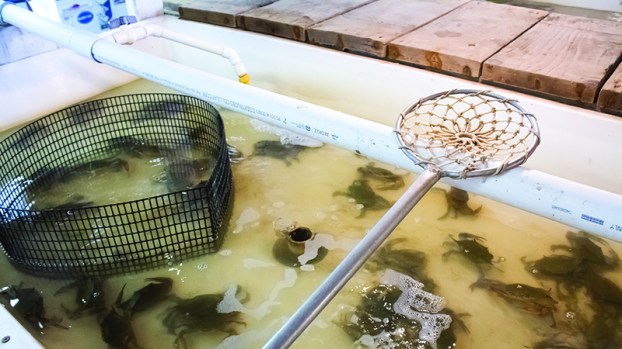 Crabs at Johnson and Sons Seafood are sold to individuals and restaurants throughout the region. 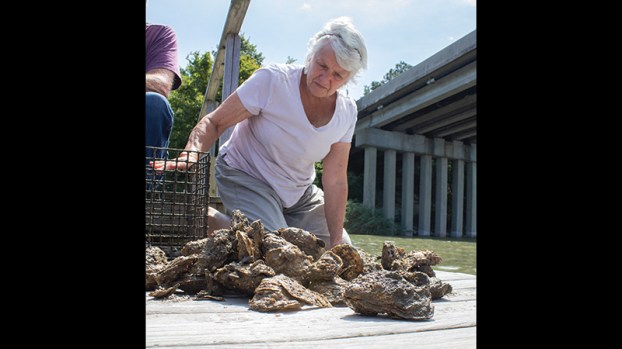 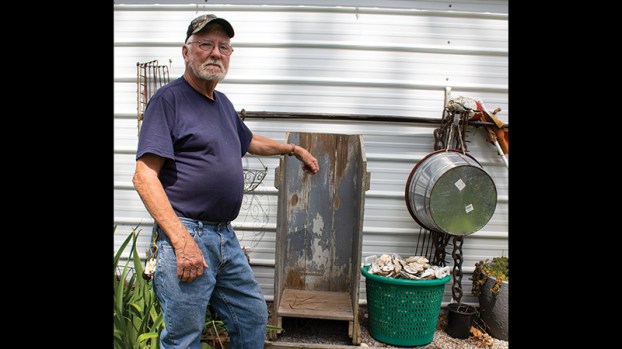 Wayne Martin worked the waterways for decades and still keeps the tools of the trade on display on his shed.

If you think of Eclipse as a sleepy village, you’d be missing the point.

To those flying up and down Bridge Road in North Suffolk, it might be easy to roll through the intersection with Eclipse Drive and not give it another thought as they cross the bridge over Chuckatuck Creek.

But you’d miss Ed and Mary Milley’s house, its backyard close enough to hear the roar of progress rolling across the bridge above. (Psst: Don’t get Ed started about the bridge, though.)

You’d miss their beds of oysters by the dock — an oyster restoration project, as the shellfish is in the midst of a resurgence in the creek after nearly dying off due to a pair of diseases in 1988. You’d miss their fig and apple trees near the bridge, and you’d miss their efforts to preserve the land they live upon.

You’d miss Wayne Martin and his wife Myra, who cans what they grow in their yard that backs into the creek. And you’d miss the story of how he made a living off the water during the good years, and took a job outside the village in the bad.

You’d miss Johnson and Sons, where they sell soft and hard shell crabs and oysters that come from the creek. Before that on the same property, there was J.R. Dixon’s Oyster Company, owned by Claudia Holland’s great-grandfather and a place where she hung out as a child.

You’d miss the life teeming on the water and in the gardens, and what lays shimmering on the surface — its heart.

Mary Milley and her husband Ed moved into their house 12 years ago, coming from the Ghent area of Norfolk, and they have been tending to the oysters in her three oyster beds in the water of the creek next to the bridge for the past eight years.

Like those who’ve grown up in Eclipse, they appreciated immediately the view of many there as its idyllic nature.

“We took a motorcycle ride to this neighborhood and we saw bikes in the yard,” she says. “People were waving, and we’re like, ‘Had we gone back in time or something?’ And that’s what started it.”

Recently, they began planting live oaks in their yard, they started a raingarden and they have American beauty-berry growing, too.

In the marshy area at the edge of the creek and her yard, they’ve been taking out the tall, non-native Phragmites a section at a time. In areas where they’ve cut them out, the natural grasses have started to make a comeback.

As the sounds of the cars on the bridge over the creek take hold — “We have this,” she says, pointing above her. Though it gets Ed’s scorn, she adds, “You get used to it.”

And they’ve made themselves at home.

While few work in the creek and the nearby rivers now, it wasn’t the case decades earlier, and especially before the late 1980s when diseases about wiped out the oyster population.

“When I was growing up, you had the entire industry in this neighborhood,” says Claudia Holland, the fifth generation of her family in Eclipse, living on Rivershore Drive. “I mean, you had some men that worked in the Navy Yard, but most of the men worked in the river when I was growing up, and we were pretty much self-sufficient back in those days.”

This year she grew tomatoes and pickles, a smaller reminder of the big gardens her parents had.

“That’s all we did all summer,” Holland says. “We picked, pulled weeds and either froze or canned (what we grew) all summer. We canned anything that came out of the garden.”

Though Eclipse might not have to be as self-sufficient as it was decades ago when tolls on the bridges kept folks from venturing out of the village as much, the people in the village tout their resilient and independent, yet sharing spirit.

Evidence the many gardens, the people who can what they grow and the resurgence of the oysters and crabs that keep Johnson and Sons humming at a good pace.

“The tolls kept us isolated for a long time because people didn’t want to move here because they didn’t want to pay the tolls every time they went somewhere,” Holland says. “We stayed isolated a lot longer than we probably would have, and before the bridges were built in 1928-29. Before then, it was like a world to itself.”

Before Johnson and Sons, there was J.R. Dixon’s Oyster Company on the same spot along the creek. It was a place Holland’s great-grandfather, John Robert Dixon, opened in the 1920s, and all four of his sons were oystermen and watermen. Her grandmother worked there as a bookkeeper.

“My granddaddy (George Dixon) had a big pile of oyster shells in the yard, and he’d go shuck them. And we used those as coloring books, really. I mean, we took them and painted them and, they were like our toy.”

And oysters and other fish from the creek and river were a staple of her family’s diet.

“They basically ate out of the river most of the time,” she says.

“Unfortunately, children can be very obstinate and stubborn,” Holland says. “I can’t believe that back in those days I wouldn’t touch an oyster.”

Holland has noticed the oysters returning in recent years.

“I sold some oysters off my ground a couple of years ago, which I probably hadn’t had any moving oysters on it in probably 30 years,” she says. “And I’m hoping to sell some more off this year. I was letting the little oysters grow. I don’t have a very big keep so it’s not like I can harvest them off this year and then go somewhere else next year and harvest.

“The oyster industry is coming back. Hopefully the pollution won’t kill it this time.”

How are they now?

The patriarch of Johnson and Sons Seafood, Robert Johnson, can speak well to the up-and-down nature of making a living off of the water, as he has done for more than 40 years, and being able to do so with his sons, Ben and Jacob. It’s why he’s quick and effusive with praise for his wife, Lisa.

“I’ve been extremely fortunate that I have a wife that has put up with all of this,” Johnson says. “Put up with all the ups and downs, the good times and the bad.”

Even with the yo-yo nature of making a living on the water, Johnson enjoys what he does — most of the time.

“When things are going good, it’s good. And when things are going bad, it’s bad,” Johnson says. I think that’s the same for anything and anybody. I’ve been lucky. I’ve had a lot of good friends that have helped us out. We’re very lucky we deal with good people and that’s all been a big plus for us.”

Johnson, who has lived all his life in the nearby village of Hobson, sells hard, soft-shell and steamed crabs, as well as oysters. He wouldn’t say their oysters and crabs are the best, though they hold their own with anyone’s.

“I won’t say they’re the best anybody could have, but we’re lucky that they’re always, generally, as good or better than anything else on the (Chesapeake) Bay.”

What they have is plenty good enough for acclaimed chef Harper Bradshaw at Harper’s Table in downtown Suffolk, as well as Smithfield Station, among others — both recently gave shout-outs to Johnson and Sons on their Facebook pages.

“This year has been a different year for us,” Johnson said, referring to the coronavirus pandemic. Normally a bad year might mean fewer crabs or oysters caught to sell. “But we’re holding our own.”

Wayne Martin was the sixth generation of watermen to work in his family, and for more than 400 years, his family has lived within 15 miles of Eclipse.

At his home on Eclipse Drive, Martin sports an exact replica of the boat he used to dredge oysters, the Mary T, and outside, hanging up, the tools of the trade.

Those bad years tended to coincide with diseases that adversely affected the catch.

“I was off and on with the water,” Martin says. “I had to leave it when Kepone took effect.”

Kepone was produced by Allied Signal Company and LifeSciences Product Company in Hopewell, with the potentially cancer-causing chemical dumped into the James River during the 1960s and 1970s. It’s taken more than 40 years for that chemical to subside in the water.

He had to leave it again in 1988 when Dermo and MSX hit the oysters, causing large-scale mortality, and there were also limits placed on shad fishing.

“That pretty much wiped the oyster business out for several years,” Martin said. “But recently, it’s started to come back, I guess, six, seven years ago, and now that they’ve come back, they’ve come back with aggression now. … It’s probably better now than it was before the diseases hit, as far as the reproduction of the oysters, the new growth. The (James) River’s full of just small baby oysters like it used to be back in the ’50s.”

He was able to get back on the water about five years ago, but retired for good in 2018, and now, there’s just a handful of watermen left on the creek. Martin, who was born and raised on the other side of Chuckatuck Creek in Rescue, has lived in Eclipse for 35 years, and he spends his time now tending to the garden, painting in watercolor and framing his own paintings. He also has built a number of bird feeders that adorn his yard.

These days, he and his wife tend to their garden, canning much of what they have grown, and they’ll put excess tomatoes on top of their fence for neighbors to take. Though she has shelves of canned goods filling her kitchen, they give a lot away also, and donate canned items for fundraisers.

It’s a way of life in Eclipse, and one that speaks to its heart.