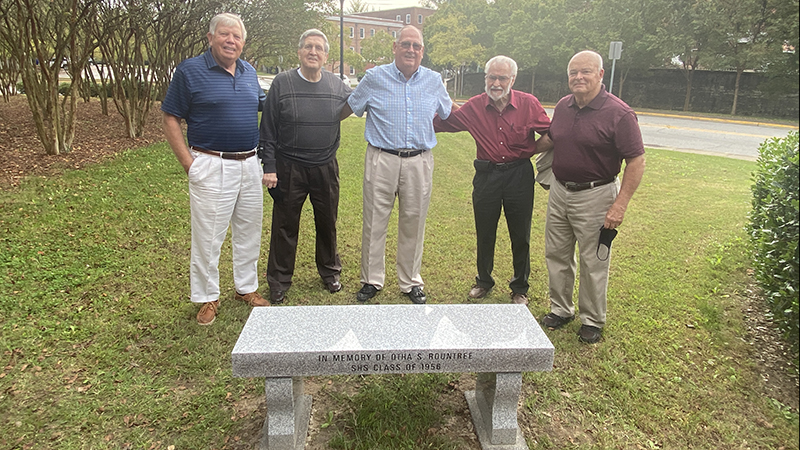 Sandy Tucker, Andy Dunn, Billy Hill, Buster Hawkins, and Jim Hill stand in front of their alma mater, the former Suffolk High School (now Suffolk Center for Cultural Arts), to remember their friend Otha Rountree, who passed away in May 2020.

Laughs and memories were shared on Wednesday as old classmates gathered at a new memorial for their friend.

Four former athletes from Suffolk High School’s class of 1963 met with their old coach in front of their former high school to admire the new memorial bench for their friend Otha Rountree.

“Otha died in the time of COVID and a time with no funerals,” said Sandy Tucker, a friend of Rountree’s. “We decided he deserved more than that.”

Rountree passed away in May. Tucker called up the rest of the group to see what they could do to honor this gem to the community. After contacting the Suffolk Center for Cultural Arts, the friends decided out of the many options available to have a granite bench in the front garden. It was installed on Sept. 29.

“Suffolk Center is honored these gentlemen wanted to honor their friend with this memorial bench,” said Susan Stone, the development director at the Center. “It adds to the gardens where many people come to sit and relax. We are really happy it’s here.”

Tucker, Billy Hill, Andy Dunn, Jim Hill and Buster Hawkins were part of Suffolk High School’s class of 1963. All but Jim Hill played basketball for Bill Peachy, who was also in attendance to remember Rountree. They reflected on Rountree’s love for Suffolk, the high school, and their adventures together.

“If he had a choice, he’d be buried right here,” said Dunn. “We had our best times with him.”

According to Billy Hill, Rountree was a few years older and was the only one who had a car. They would go in his car on nights when no events were planned and drive around the neighborhoods and honk the horn to see if anything was happening they did not know.

“He corralled us and kept us in tow,” said Hill. “We were full of ourselves and wanted to have fun. He took care of us, well, not just us but the thousands of men and women he came across. Otha was always looking at how he could bring help or pleasure to people. He brought many hours of pleasure to our lives, and what better tribute than this bench his friends and acquaintances can visit.”

Rountree volunteered with the Suffolk High School basketball team after he graduated.  He also was a member of the Suffolk Lions Club and The Jolly Boys. No conversation about Rountree’s community involvement would be complete without mention of his time at Obici Hospital.

“Many recognize Otha for volunteering at Obici’s front desk with his crazy hats,” said Peachy. “He spent so much of his time there.”

Now, community members can come to remember the man who touched so many lives in Suffolk in a central and public location.

“We hope those who loved him will visit and take time to sit and remember Otha,” said Tucker.

“I know he’s looking down and smiling,” said Jim Hill.