Navy plate within reach to its preorder goal 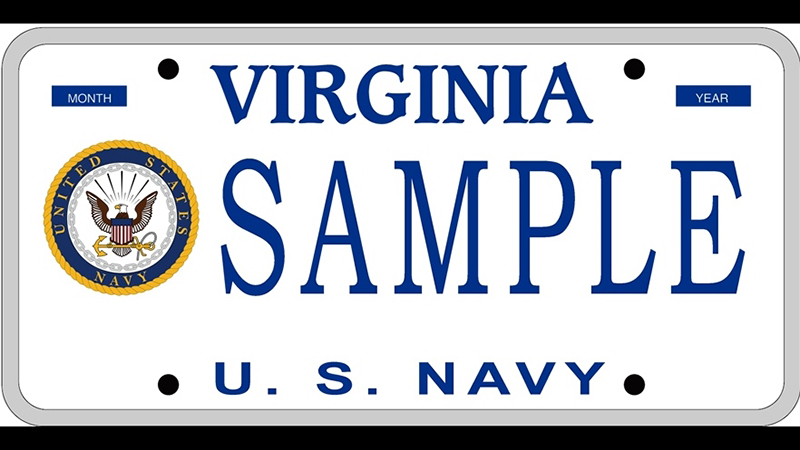 Roger Hirsh is heading up the preorder of Navy license plates to make it an official addition to the Virginia DMV plate selection.

A Suffolk resident continues his long journey to get a U.S. Navy license plate for cars in Virginia.

Roger Hirsh has spent the last three years trying to get 450 preorders on the U.S. Navy license plate for the Dec. 1 deadline to get the plate approved and on the road for fall 2021.

“This will be my fourth Dec. 1,” said Hirsh. “I’m a committed optimist. If we don’t hit it this year, I’ll be at it for another year.”

Hirsh is nearing his goal and needs 188 preorders. He hopes to get them by Dec. 1. In Virginia, the proposed plate must have 450 paid pre-orders before being introduced to the General Assembly. From there, the plate needs the lawmakers’ approval before another nine months it takes to process the plate and get it on the road.

Hirsh is a retired captain who served active duty in the U.S. Navy for 30 years before spending 10 years at the Naval Medical Center Portsmouth as a pharmacist before retiring in 2018.

After going to get a new license plate, he realized the Virginia DMV had 300 plate options, including the Marine Corps, Army and Coast Guard, but nothing for the Navy. Since then, Hirsh has worked every day through Facebook, the website, flyers, and working tables at events to get enough preorders for this plate.

“It has been a slow process with straggling in four or five orders each week at the most,” said Hirsh. “Haven’t found a Willy Wonka Golden Ticket to get people on board yet.”

Many challenges have appeared for this seemingly easy task. Hirsh has found it challenging to get people to pay the fee in advance when there is no date set for the plate’s release. Some have had their plate pre-ordered since January 2017. Other hurdles have included having little to support from the Navy to get the word out, unlike other organizations for their plates. Now, his in-person marketing has taken a hit due to COVID-19 as events and meetings for him to attend have dramatically dropped.

The usual price for a Virginia specialty plate is $10. However, since this is a revenue share plate, the cost is $25. The extra $15 will go to the Navy-Marine Corps Relief Society. This society is the primary charity that assists Navy and Marine Corps families in need.

“During the pandemic, military spouses are losing jobs, and many military families struggle to make ends meet,” said Hirsh. “If one of them is on deployment, that can cause strains on that family. The Navy-Marine Corps Relief Society helps provide resources for those families.”

To preorder, the $25 plate fee is required. However, the deposit is completely refundable in the case of moving, selling the car, or no longer wanting to wait. Only 10 have requested refunds so far due to circumstances out of their control.

The plate is available for both former and active military. It is not a veteran plate but for anyone who has served or is serving in the Navy.

“One of the names the car is under has to be retired, former, active, or unmarried surviving spouse,” said Hirsh. “That’s what makes it a true Navy plate.”

For further details or an application, visit the website at NavyPlateVirginia.com or on Facebook. Hirsh is available at navy.plate.va@gmail.com or 757-274-5245 for details.