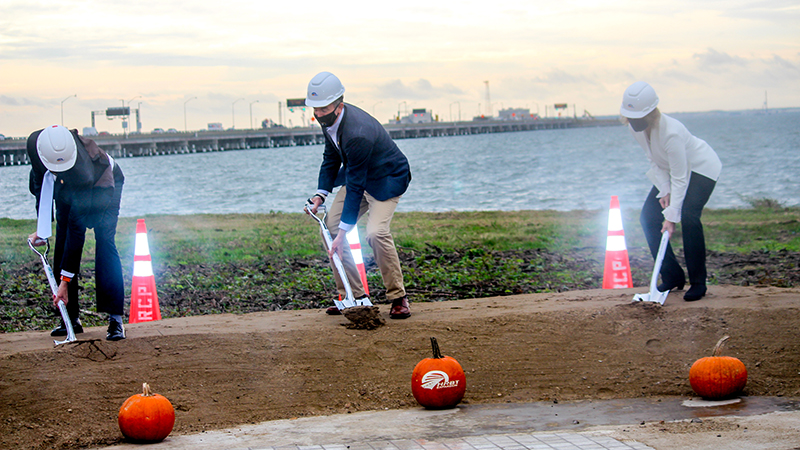 State, regional and Hampton Roads officials, including Gov. Ralph Northam, middle, and Secretary of Transportation Shannon Valentine, right, break ground at a ceremony for the new Hampton Roads Bridge-Tunnel on Oct. 29 in Hampton. The project, slated for completion in 2025, will expand the current four lane water crossing to eight lanes.

Even a global health crisis is no match for Hampton Roads Bridge-Tunnel traffic.

In April, at the height of the COVID-19 lockdown, traffic volume at the HRBT, which links Hampton and Norfolk via Interstate 64, was just 60% of average. By Memorial Day, that had risen to 75% and since July, the Virginia Department of Transportation found that traffic volumes had returned to 95% of average.

For years, the tunnel has been the site of regular traffic jams that can exceed six miles. Gov. Ralph Northam and Transportation Secretary Shannon Valentine led a ceremonial groundbreaking celebration Oct. 29 to mark the start of construction on a $3.8 billion expansion project.

“While so much of our lives has changed during this unprecedented time, congestion at the Hampton Roads-Bridge Tunnel has remained remarkably consistent, which is why we are here today,” Valentine said.

Northam called the occasion “an exciting day” and added, “I know we’ve all spent many hours sitting in traffic out here and this is just such a big, big deal — not only for Hampton Roads but for Virginia and for the East Coast,” Northam said.

The HRBT first opened in 1957 and was last expanded in 1976, providing the current setup of four lanes — two in each direction — across the water. More than 100,000 vehicles per day typically use the bridge-tunnel at the height of the summer travel and tourism season. The HRBT expansion will add twin, two-lane bored tunnels and widen the four-lane segments of I-64 between Settlers Landing Road and the Phoebus shoreline in Hampton and  between the Willoughby shoreline and the I-564 interchange in Norfolk.

The new HRBT is the single largest infrastructure project in state history. “When it’s done, you’ll be able to get to where you’re going faster. You won’t have to wonder whether it’s going to take you five minutes or an hour or more to get through the tunnel,” Northam said.

Overall, the project will increase capacity along nearly 10 miles of highway between Hampton and Norfolk.

Even if you don’t live in Hampton or Norfolk, “the truth of the matter is the whole region uses this tunnel,” said Suffolk Mayor Linda Johnson, who is also chairwoman of the Hampton Roads Transportation Accountability Commission. The commission is made up of local elected officials who decide how millions in local transportation funding is spent.

Crews will use a specialized tunnel boring machine to dig and construct tunnel segments simultaneously. The new HRBT is only the fourth roadway project to use this equipment in the United States, according to VDOT.  The machinery is under construction in Germany and is expected to arrive in Hampton Roads in 2021 for assembly, which will take several months. It is expected to begin tunneling operations in early 2022.  The expansion project is slated for completion in November 2025 by design-build contractor Hampton Roads Connector Partners.

“The Hampton Roads Bridge-Tunnel has some of the worst congestion and gridlock in this entire region. By doubling capacity and allowing people to connect to jobs, health care, education, opportunity we are unlocking this region,” Valentine said. “It’s not only great for the people who live here, it’s great for the Commonwealth.”

Officials said in addition to alleviating traffic congestion, the completed project will benefit tourism, the Port of Virginia and the military — three of Hampton Roads’ most important industries. VDOT said the expansion is projected to bring more than $4.6 billion in investments and an estimated 28,000 new jobs over the life of the project.

A funding agreement with HRTAC announced in 2019 commits 92% of locally sourced funding for the expansion. Additional financing includes $200 million from the state’s Smart Scale program and an additional $108 million from VDOT. Officials also touted that they have awarded more than $87 million so far in project contracts to more than 160 small, women, minority-owned and disadvantaged businesses.

By taking appropriate health and safety measures, Valentine said she expects the project to stay on schedule.

“As we’ve been moving forward, we’ve been trying to think of innovative ways to keep these projects moving,” she said. “We’ve been able to do that and in some ways, even accelerate it. We understand that in transportation, we’re part of moving essential people and critical goods, so getting this project done as effectively and efficiently as possible is an important way to do that.”