Selling a vision of Peanut Crossing 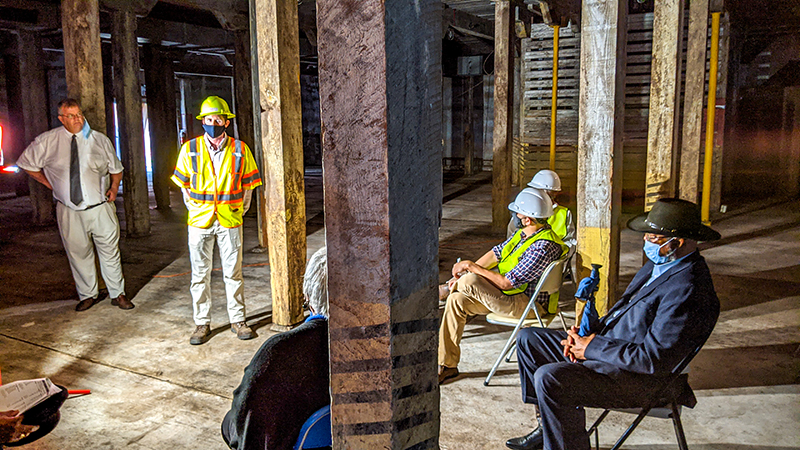 Representatives from Rep. Donald McEachin’s office, state Sen. Louise Lucas, state Delegate Clinton Jenkins and four members of City Council — Curtis Milteer, Mike Duman, Tim Johnson and Roger Fawcett — were among those who received a behind-the-scenes look at the work that has been happening at the Peanut Crossing site since July.

The developer and owners of Peanut Crossing on the edge of downtown Suffolk have a vision they want to sell, and judging by the reactions of local and state leaders, as well as a representative from Rep. Donald McEachin’s office, they have the buy-in they were looking for.

Sitting inside what has been envisioned as the Peanut Crossing Market Place — think Seattle’s Pike Place Market or the West Side Market in Cleveland — they explained the work going on in the first phase of the project to build 58 high-end apartments and freshen up the facade. But they also wanted the region’s leaders to see a bigger picture for the site.

In that building, which sits immediately to the right of what will be Peanut Crossing’s main entrance, representatives from Rep. Donald McEachin’s office, state Sen. Louise Lucas, state Delegate Clinton Jenkins and four members of City Council — Curtis Milteer, Mike Duman, Tim Johnson and Roger Fawcett — were among those who received a behind-the-scenes look at the work that has been happening at the site since July. Even during their visit, work continued on the first phase of work to build the apartments in an area nearest the railroad track and to improve the facade of the site. Those apartments are expected to be move-in ready by late spring next year.

“This project will be vital to the downtown development of Suffolk,” said Milteer, who grew up just blocks from the site.

But the tour was also about the developer and site owners presenting a grander vision for the site — one that would consist of a market akin to Pike Place Market in Seattle or the West Side Market in Cleveland, an Amtrak train stop and a mix of commercial uses.

Former Suffolk Borough councilman Charles Parr, owner and funeral director at Parr Funeral Home and Crematory, bought the site for $225,000 from the Golden Peanut Company in 2018 after Monument Companies walked away from a project to develop the site due to uncertainty about the future of the state’s historic tax credit program.

Craig Johnson, president of Virginia Marketing Associates, Charles Brown, a former city vice mayor, and Robert Babb, owner of The Countertop Man, are part of the group with Parr developing the site.

Brown asked that the local and state leaders consider the vision to have a market there to counter the food desert of the area, and to see their vision of having an Amtrak stop at the site.

“He will be very interested in this,” said Sylvia Murphy, a caseworker who works with district representative Nick Gabriel out of McEachin’s district office just up the street from the Peanut Crossing site. “I’m sorry he couldn’t come, but Mr. Gabriel took a lot of notes and pictures and he will be doing the report back to the congressman to make sure that everything is to his liking and that he will be on board with you guys. I’m sure about that, because this is really, really nice, because this is more than I’ve ever seen for this area.”

Lucas said it’s no surprise to her that there is a food desert in south Suffolk and is pleased to see an effort to deal with food deserts and food insecurity. She pledged to return to keep tabs on the progress of the project.

“We are going to go after historical tax credits, grants or whatever we’ve got to go after to help get it done,” Parr said, “be it private, public-private, whatever, to get it done.”

Randy Cosby, the director of acquisitions and development for Echelon, said the front building, at 44,000 square feet, would be ideal for a market. Plus, with the planks throughout the first floor of the building, it would give the market a unique character. Also, because of the historic nature of the site, they cannot be removed.

Cosby asked visitors to “see what we’ve seen with this place and have the vision that we think it could become pretty special.”

Jenkins recalled discussions about food deserts in January during the General Assembly session and offered praise for the development as a whole as a means to offer “one-stop shopping” for the future residents of Peanut Crossing.

“This project here is very timely,” Jenkins said. “And I think it’s going to be a great asset for this community and the city of Suffolk as a whole.”

Last year, council unanimously approved a conditional use permit to build up to 225 apartments on the site of the former Suffolk Peanut Company. The zoning will change the triangular-shaped property, which also borders Wellons Street to the west and the Norfolk Southern Railroad mainline to the north, from heavy industrial zoning to central business district. The apartments are being designed for working professionals, with 80% of the 225 apartments being studio or one-bedroom units, with the others being two bedrooms.

The project leverages federal and state historic rehabilitation tax credits that require key historic features to be preserved and featured.

Edwin Gaskin, president of Echelon Resources, Inc., a historic tax credit, property redevelopment firm, has said the project, over multiple phases, would see more than $30 million invested into it, with the first phase coming in at about $8 million. He said they are “testing the waters” with the first 58 apartments to see what kind of excitement the project has.

In September, Gaskin told the Economic Development Authority that there is an opportunity at the site to create a business park with a mix of commercial uses, in addition to the Phase 1 development. The site has about 150,000 square feet of available space in nine non-Phase 1 buildings at the site. He said there could be between $15 million and $25 million in redevelopment investment and about 1,400 full-time equivalent jobs. The city could receive a net 10-year direct revenue benefit of around $1.2 million.

Gaskin could receive up to $280,000 in facade grant money after a modification that allows for grant awards of up to $20,000 per building in the development, rather than $10,000. The money would be to improve the look of the exterior of 14 buildings on the site while the interior work takes place. The grant money will be roughly about 10-to-1 match on what Echelon would invest in the project, versus what the EDA would provide.

Numerous commercial tenants have shown interest in the site, according to Gaskin, and though he declined to name them, he expects updates in the next couple months.

While every vote related to the project has received unanimous support from the EDA, Planning Commission and council, Gaskin said he does not take that for granted.

“Every vote we got, and thankfully they were all unanimous in favor, it was essentially the Planning Commission and City Council lending us their credibility,” Gaskin said. “They’re voting on our behalf, so we feel the burden of that expectation, and we want to do something here that they’re proud of. We appreciate their endorsement.”

And with praise from Lucas, Jenkins and Murphy, Gaskin and everyone associated with the Peanut Crossing property received an added level of support.

“You got my interest when I heard that — just to know that somebody’s coming in those overlooked communities,” Lucas said.

Gaskin said the project is tracking on schedule and hopes to have the first set of apartments ready by “April-ish.”

“Sometimes you have to make the market,” Gaskin said. “You have to show people what can be successful in a particular micro-market … and that’s what we hope to do with this big investment here in south Suffolk — show other folks that it’s not a stretch, it’s not a speculative gamble to invest in something other than North Suffolk, or downtown, that south Suffolk has come into its own, and other projects well beyond ours and certainly beyond our scope and influence, can roll forward with confidence. So that’s what we’re trying to do here.”