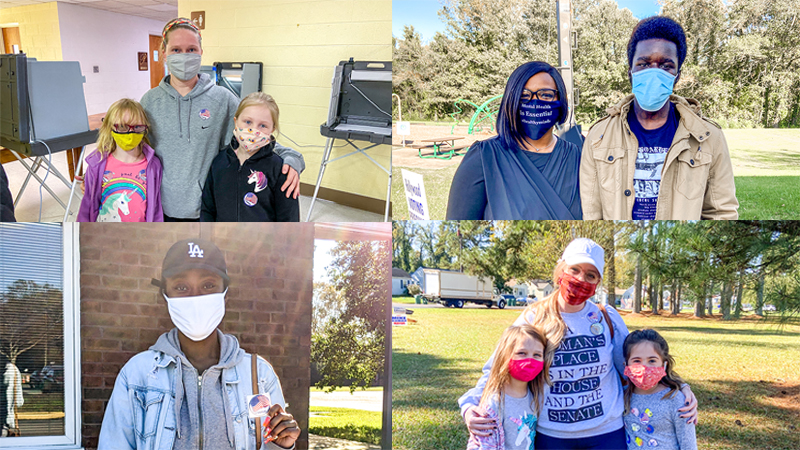 By Rachel Wartian and Jimmy LaRoue

Despite the chances to vote early, many Suffolk residents chose the traditional voting method in-person on Election Day.

Election Day was in full swing on Tuesday as residents of Suffolk made their way to the polls. Like every other event in 2020, voting looked different this year as voters came out. For the first time, Virginia had early voting with no excuse needed to keep crowds down on Nov. 3. Still, the tradition continued for many who came out the last day.

“Honestly, I knew this line wouldn’t be crazy,” said Samantha Blehm, a voter in the Suffolk Borough. “There is just something special about voting on Election Day.”

In the spirit of the day, Blehm wore a long-sleeve shirt with the saying, “A woman’s place is in the House and the Senate,” along with a pin celebrating 100 years of women’s right to vote.

Suffolk’s seven boroughs were ready for a special election year. Farther down the ballot, the city is deciding between four candidates for mayor, along with three boroughs choosing City Council and School Board representatives.

“It’s good to come out and be a part of the community and not hide under a rock,” said voter Holland Branton.

Among the voters coming out, some were first-timers who had recently turned 18 and were excited to vote for the first time. Other first-timers were much older.

“I’m voting today because it’s the proper day to vote,” said Jerry Gilpen, a first-time voter in the Suffolk Borough. “I chose to vote because, honestly, I like Trump.”

“Well, I voted for Biden, so I canceled out everything he just voted for,” replied Dede Snead.

Even though the polling location at Suffolk Presbyterian Church had a steady flow, voters said they didn’t mind waiting until Election Day to vote because they knew they would not have an extraordinarily long line to stand in.

“We’re not in a highly-populated city that would have this crazy long line for me to wait in, and I didn’t have to,” said Blehm.

Though Ethan Murat had voted before, the 20-year-old had not yet voted in a presidential election.

Voting in the Chuckatuck Borough’s Ebenezer precinct at the Crittenden, Eclipse and Hobson Ruritan Club, Murat had brought with him his sealed absentee ballot that he had yet to fill out.

He had a purpose in waiting until Nov. 3, saying voting in person, for him, solidified the voting process for him a little more and made it more real.

“As an American citizen, I feel like coming out and doing it today is something that’s important, and especially for you to just show your voice,” Murat said. “And it’s important to get out here and vote, and doing it together in person is more personable, especially with everything going on.”

While he did not say for whom he voted, Murat said “the current state of a lot of things is crazy on either side.”

“The future of America is definitely important,” Murat said, “so keeping that in mind, I’m not going to get really specific about it, but there’s a lot of factors that go into it and I feel like it’s important for everyone to understand what they’re voting for and who they’re voting for, instead of, ‘Oh, here’s the name, let me vote for that.’ You need to look into it and understand who you believe in as a citizen and what you stand for.”

At the Ebenezer precinct, 675 people had voted in person as of 12:15 p.m. Tuesday, while about 700 in the precinct had voted absentee.

Citywide, more than 30,000 voted early, more than five times the number of people who voted prior to Election Day in the 2016 presidential election.

In Suffolk, 30,317 of the city’s 67,917 eligible voters voted early — 22,301 who voted in person and another 8,016 who voted by mail as of Nov. 1. Another 2,200 ballots mailed to city voters had not yet been returned, according to State Board of Elections and Virginia Public Access Project data. In the 2016 presidential election, 5,997 city residents voted early.

Like Murat, Zya Leonard, 20, also voted in her first presidential election on Election Day in the Sleepy Hole Borough’s Belleharbour precinct at Temple Beth El. She had intended to vote early, but due to having to commute to New Jersey from Suffolk and back several times due to multiple deaths in her family, she had not been able to do it until Nov. 3.

“I’ve been meaning to vote early, but so much has been happening,” Leonard said. “I’ve been having to go to Jersey. I’ve had three deaths in my family, so I’ve been going back and forth.”

She recalled her interest in politics being spurred on as a child, when eventual winner Barack Obama ran against John McCain.

“I’ve been waiting 20 years to do this,” Leonard said. “When I was little, when I lived in Jersey still, and Obama and McCain were going against each other, I was an Obama girl. … I’ve always been into politics and everything. I take it really seriously. I feel like everybody’s voices matter. It started at an early age, so now, I can finally vote.”

In the Nansemond Borough’s Burbage Grant precinct at Northern Shores Elementary School, there had been 589 people who had voted in person by 11:45 a.m. Tuesday. Several candidates were outside making their pitch for votes.

Both Suffolk School Board candidates — incumbent Dr. Judith Brooks-Buck and challenger Andy Hilton — were there around 11 a.m., as was Nansemond Borough Councilman Lue Ward, who is running against Courtney Wolfe, and mayoral candidate Brian Bass.

With candidates all over the city making their case for votes, Brian Bass, who also ran for mayor in 2016, had help from his mother, Margaret Bass, while at Northern Shores Elementary.

“He thinks he can make a difference, so he’s trying,” Margaret Bass said.