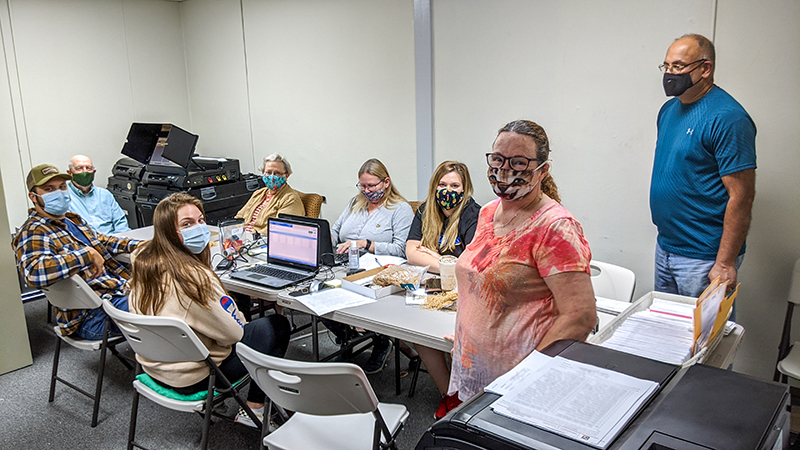 Across the country, votes are still being tallied, counted, certified and the voting process closely scrutinized following a contentious presidential campaign and political climate.

But it was much less intense inside the room where the three-member Electoral Board in Suffolk was working to canvass the election, and in another room where election officials in the Central Absentee Precinct were processing the post-election ballots that were postmarked on Election Day.

Board Secretary Beverly Outlaw said ballots coming in after 11:59 p.m. on Election Day were held and not processed until Nov. 6. They were required by law to be in by noon.

“They’re being processed currently and we will get those results today,” said Election Board Chairwoman Erin Rice. “And they will be reviewed by the board, as we do all our precinct results.”

Rice said they were not sure how many to expect to receive, but going into Nov. 6, they had received fewer than 60, with another 10 more arriving on the final day.

As a board, the process it uses to do its work is the same, going through all of its provisional ballots, along with each precinct’s statement of results, and Rice noted there were an increased number of provisional ballots — about 300.

It hasn’t been an election day, or even week.

With early voting taking place this year, Director of Elections and General Registrar Susan Saunders said there were close to 350 people who worked on Election Day.

People who had requested a ballot, but chose to vote in person, had to surrender their mailed ballot and vote on the machine at the polling precinct, or they could drop off the completed ballot at one of the drop boxes located at every precinct on Election Day. If they did not surrender their mailed ballot, people could vote with a provisional ballot. More than 200 people dropped off their completed ballot at a precinct drop box on Election Day, Rice said.

The Electoral Board reviewed every provisional ballot to determine their qualifications for counting, Rice said.

Outlaw said the information it had on hand would help determine whether someone had received a ballot and just did not vote with it, “so that when we reviewed it, we can say, ‘OK, they didn’t vote, so we can count this ballot.’ If for some reason they were confused or whatever, and came to vote, and had a provisional ballot, and the system said no, they’ve sent in their absentee ballot, and it was counted, then we wouldn’t count the provisional.

“So there is a checks-and-balance about somebody being able to cast a vote twice,” Outlaw said.

She noted an increase in people coming to the polls to vote in person after claims that people should go vote in person even after mailing in a ballot because it might not count.

Rice addressed the issue of early votes not being counted until after 7 p.m. on Election Day.

“There’s a process of closing out the precinct, and the Central (Absentee) Precinct is just like a normal precinct,” Rice said, “and there’s things that they have to do in terms of providing numbers to the board. And that just takes time. I know people want an immediate response, but the election laws require us to do certain things, and it just takes time and we just ask for patience.”

State code states that, in the case of machine-readable ballots, “the ballot container may be opened and the absentee ballots may be inserted in the counting machines prior to the closing of the polls in accordance with procedures prescribed by the Department of Elections, including procedures to preserve ballot secrecy, but no ballot count totals by the machines shall be initiated prior to the closing of the polls.”

Rice said she understands the desire to have the early voting results earlier in the evening after the polls closed at 7 p.m. Nov. 3.

“I understand that, but we didn’t start processing those numbers until the polls closed at 7 p.m. that evening,” Rice said.

Outlaw said that in previous years, what the board received from the Central Absentee Precinct on Election Day “was pretty close to what the total count was going to be, but that all changed this year.”

Rice, who said she was pleasantly surprised by this year’s turnout, noted the attention this year’s elections have received, and it heightened their determination to ensure that the officers of election and the Electoral Board did everything 100% correctly.

Said Rice: “I don’t think anyone knew what early voting was going to look like, and it was well-received. I think a lot of people felt safe about doing early voting, or absentee voting in person and by mail. It just takes time.”

Outlaw noted that there has always been a week following Election Day to get the final vote totals and certify an election. “It will take as long as it takes to get it right. I know that it will at least take us through the weekend.”

“The totals that you get prior to the certification of elections are never the final ones until the board certifies them,” Outlaw said. “And that’s what all this process is about, to make sure you know every number is correct, and they match up with the tapes and the roll books.

“Because of all the tension, especially at the national level, people are anxious to get a final result. We just want to make sure that it’s a final, accurate result.”