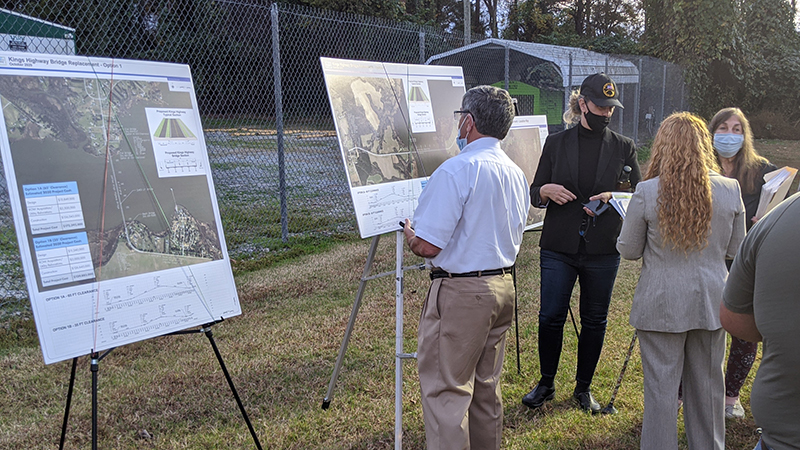 Chuckatuck Borough Councilman and Mayor-Elect Mike Duman was among the dozens of people who turned out for a public information meeting Nov. 10 at the entrance to Lone Star Lakes Park to provide feedback on whether the city should build a new Kings Highway Bridge.

Linda Wright still has the petition signatures collected over a five-month period in 2005 to put in a new Kings Highway Bridge at its original location – all 4,230 of them.

Those copies were presented to Suffolk City Council in June 2006, more than a year after the bridge had closed because the Virginia Department of Transportation had deemed it unsafe,  and about a year before the bridge began being torn down.

It was more than six years after the council, at that time, decided to pursue a new bridge location a half-mile upstream, rather than rebuild the bridge at the site it had been located at since 1928.

In 2000, the money was there, and compared to the costs – in 2030 dollar estimates – was nowhere near as costly. Now, the money isn’t there, and the lowest estimates if federal, state and local money can be found for one have a new 35-foot bridge roughly at the site of the old bridge costing nearly $140 million. A 65-foot bridge at that location is estimated to cost about $172.4 million.

To build it along Five Mile Road between Godwin Boulevard and Kings Highway would cost anywhere from about $186.3 million to more than $204 million.

“The Five Mile location, it would be twice as long, more expensive, there’s no road going to it, plus there’s Native American artifacts where they would put the pilings in, burial sites,” Wright said at a Nov. 10  public information meeting at the entrance to Lone Star Lakes Park near Chuckatuck. “You can’t just put it in there. The original one at 35 feet is all we need, because a sailboat cannot go all the way to the Hilton Garden Inn (Suffolk Riverfront), so all we need is the cheapest option.”

George Mears, who attends St. John’s Episcopal Church located past the Crittenden Road turnoff on Kings Highway, noted that there are just nine families who worship there, and said it is lucky if it has 10 people in church on Sundays. According to a 2014 Suffolk News-Herald story, it used to have 70 to 100 worshippers when the bridge still existed.

He also supports rebuilding the bridge at the old site.

“The abutments are the most expensive part of a bridge. They’re already in existence at the original location,” Mears said. “The engineering’s done, the environmental site assessment is already done. The geotechnical study, it has to be renewed. … You can rebuild on the original footprint without a problem.

Terance Boothe, who lives in Chuckatuck, about four minutes from either proposed bridge location, said he did not have a preference for where a new one is located, but he does want one.
“It would cut down on travel time, of course, on that side, whether it be Portsmouth, Chesapeake, Virginia Beach, or any of that” Boothe said. “And I think also, for emergency purposes, I think that would be another option that we need, if (U.S. Route) 460 is closed, and (U.S. Route) 58, there’s no other way to get from one side of this city to the other.”

He gave an example of the extra time it takes without a bridge.

Hansen said he does not yet have a sense on what residents want yet, except that those who favor some kind of bridge replacement would rather it be 35 feet high rather than 65 feet high.

He said the city, along with Clark Nexen, will give a presentation to City Council either late this year or early next year on the results of the feedback that residents have provided – they have through Nov. 19 to provide it to the city.

Hansen said council will not be asked to make an immediate decision about whether to move forward with one of the three options – the third being not to build anything. If council did vote to proceed with getting funding for a new Kings Highway Bridge, the city would need to then determine the next steps in terms of securing that funding.

Sen. John Cosgrove, who represents part of Suffolk in the General Assembly, introduced legislation in January that would have allowed the bridge to be considered by VDOT for State of Good Repair money. That bill, co-sponsored by Sen. Louise Lucas, who also represents part of Suffolk, was continued to the 2021 legislative session by the Transportation Committee. The bill would have also directed the Commonwealth Transportation Board, the city and members of the House of Delegates and Senate, to work toward finding funding sources to replace the bridge.

Hansen said the process has been good for the city to hear what residents want, and noted that Clark Nexen would be challenged to synthesize the information for council.