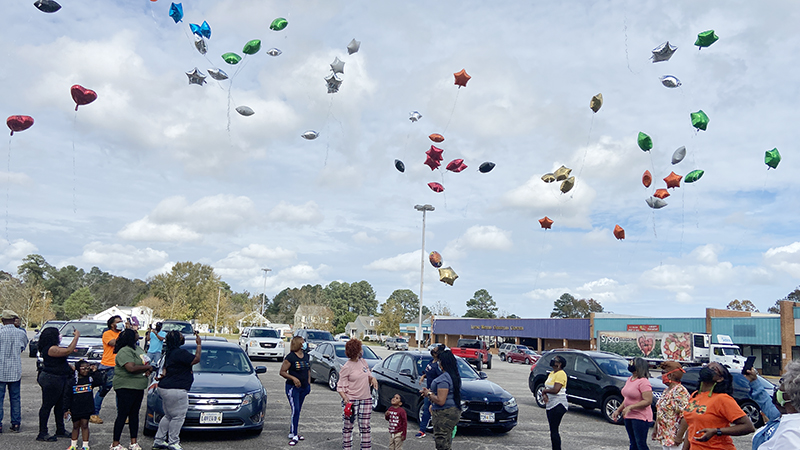 A group of friends and family gather on the five-year anniversary of Quantez Russell’s disappearance at the White Marsh Road Plaza to release balloons in his memory.

After five years, the friends and family of Quantez Russell met at the White Marsh Road Plaza to remember him and pray for justice.

Nov. 11 marked five years since Joan Turner received a phone call that her son, Quantez Russell, was shot in Newport News. Since that night, no one knows where he is or what happened. Loved ones gathered in the parking lot of the plaza near the Adopt-a-Spot sign named in Russell’s memory.

The group gathered with balloons to help keep Russell’s name alive. Friends and family shared stories and prayers as they sought some form of closure to this mystery.

“We are here today to celebrate his life and go forward,” said Turner. “I appreciate all of you coming out today to keep my baby’s name alive.”

Detective Chris Scherer, the lead detective on Russell’s case, also attended the gathering. Like other cold cases, this case is not over yet. The Suffolk Police just need more information to bring justice to it.

“I am glad I had the opportunity to come out,” said Scherer. “These cases are hard because there are not many leads, and people don’t like to talk about it. If you have any information on a crime, please help us figure it out and get justice for the families.”

Turner and others wore orange and white in support of Mothers Against Violence. Turner asked others in the group that had lost a child or family member to murder to step forward. She noted that there were too many, and some were unsolved as well. She thanked the other moms for giving her strength because they know what it’s like to lose a child this way.

“You don’t know what it feels like unless you had that baby in your belly and that feeling you get when your baby is in trouble, locked up, missing, or presumed dead,” said Turner. “I also can’t imagine what it feels like as a father to lose your son.”

The group met in the parking lot next to Davis Boulevard. According to Turner, this was the street where Russell would participate in the “stuff that he shouldn’t be doing.” The sign was put at the end of this road on White Marsh Road to keep his name alive and shine a positive light. Turner took this opportunity to thank Russell’s father, Eugene Boone III, for putting mulch and flowers around the sign.

According to a friend from their church, Cheryl Jordan, Russell didn’t always live a rough life. When he was younger, he was very active in Boy Scouts and his Sunday school class at East End Baptist. Like others in attendance, Jordan came to remember him for the good qualities and not the mistakes.

Russell’s sister, Jenay Wolfrey, spoke and encouraged everyone that this was a time for a change.

“We always talk about what others are doing to us, but we are doing it to us,” said Wolfrey. “It is our job to correct our friends when they’re not doing the right thing and pray for people. If you don’t have anyone in your circle praying over you, then your circle ain’t right. It’s time for a change. It’s time for people to speak up.”

Wolfrey noted the culture of not snitching on each other and turning around and wanting people to speak up when it affects them. She believes there are people out there who set her brother up on the night he went missing and are sitting back and not saying anything.

“People won’t speak up, but I’m not gonna shut up,” said Wolfrey.

At the end of the gathering, each person let go of a balloon, saying, “We miss you, Q.”