Several inches of rain causes flooding in parts of city 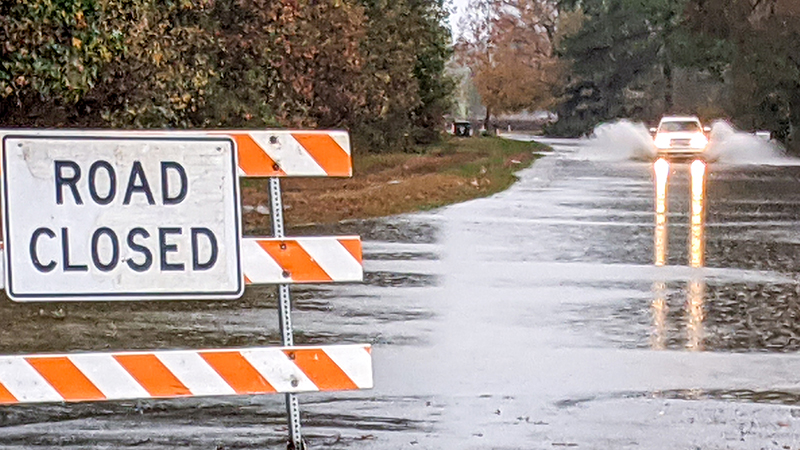 Moore Farm Lane at Godwin Boulevard was closed Nov. 12 due to flooding in the road caused by more than four inches of rain, according to the National Weather Service’s Wakefield office.

Rain that began during the afternoon Nov. 11 Wednesday and started to taper off about 24 hours later left several inches of rain in the city and surrounding area and left many yards and numerous sections of roads covered in water.

A flood warning remained in effect for Suffolk and surrounding localities through 5 p.m. Nov. 13.

Cody Poche, a meteorologist with the National Weather Service’s Wakefield office, said based on radar estimates, there was widespread rainfall of four-to-six inches in the city and western Tidewater area, with more than six inches in some spots.

Rainfall totals, according to the weather service’s Wakefield office, ranged from 7.54 inches in North Suffolk near Col. Fred Cherry Middle School, to 6.37 inches in Hobson, 6.21 inches west of Nansemond-Suffolk Academy, 5.23 inches at the Great Dismal Swamp National Wildlife Refuge, 4.72 inches in Eclipse and 1.68 inches at the Suffolk Executive Airport.

Poche said the rain has moved off the coast, and drier, cooler weather is settling into the region.

However, the city and most of Hampton Roads are still under a flood warning until 5 a.m. Friday.

Earlier Thursday, the city noted that “Suffolk Department of Public Works is aware of reports of water covering roads in various parts of the City of Suffolk due to today’s significant rain event. Forecasts call for rain to continue into the early evening. Drivers should exercise extreme caution while on the roads.”

Poche said the Blackwater River in Franklin was expected to reach flood stage by late evening, Nov. 12, and remain that way through Nov. 17.

The heavy rains caused a washout of Copeland Road in the 1900 block and that section between Whaleyville Boulevard and North Liberty Spring Road will be closed for about a week to repair the damage, according to the Suffolk Public Works Department.

The swamp upstream of the road will need to drain down before Public Works can make the repairs. Barricades are in place, and the city advises residents to plan for delays due to the detour.

Following a busted pipe and plumbing problems at City Hall, the Suffolk School Board meeting set for Thursday evening was changed to a virtual-only meeting, according to school division spokeswoman Anthonette Ward and city spokesman Tim Kelley.

High water signs were in place in a number of areas across the city, including on Crittenden Road near Kings Highway and Sleepy Hole Road near the Sleepy Hole Golf Course and Obici House.

At Sleepy Hole Road near Kings Highway, cones were put out on both sides of the flooded roadway as water flowed onto the road, creating a waterfall into a wooded area.

Though Moore Farm Lane at Godwin Boulevard was closed due to water in the road, a trio of cars was observed Thursday afternoon driving through it toward Godwin Boulevard, and another turned around.

There was also standing water on Nansemond Parkway near the railroad tracks observed late afternoon Thursday.