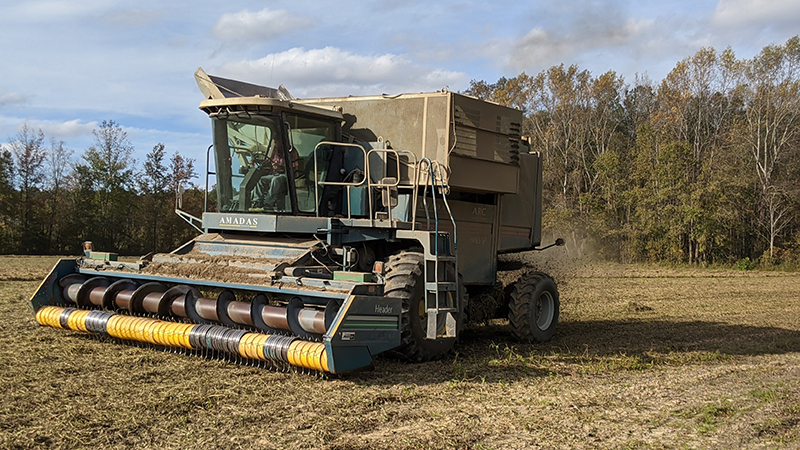 Jason and Dale Holland pause for a moment to discuss farming for an episode of Virginia Farm Bureau’s Real Virginia program scheduled to air sometime in December. Burke Moeller, a video producer, spent several days in the city earlier this month interviewing farmers, and waterman Ben Johnson, for the show’s County Closeup segment.

The city’s farmers are getting a ‘real’ chance in the spotlight, as a video producer from the Virginia Farm Bureau’s Real Virginia program spent several days in Suffolk recently to highlight their work.

“I wanted to show a fair representation of the different types of agriculture that’s done here,” Moeller said.

The program, which focuses on state agriculture for a consumer audience, airs nationwide at 3:30 p.m. on the first Saturday of each month of RFD-TV on Dish Network and DirecTV, and regionally on WHRO and WTKR, both in Norfolk. The show is also available to watch anytime on the Virginia Farm Bureau YouTube page.

“We try to reinforce the value of agriculture and also to educate on how the food that they put on the table is made and processed,” Moeller said.

Each month, the show features a different location and looks at an area from an agricultural perspective. For Suffolk, Moeller wanted to highlight the role agriculture plays in the city, which sectors are most prevalent and how the industry is changing.

Taking a break from farming peanuts on a recent, warm afternoon, Jason Holland, like his father Dale Holland, is a lifelong farmer and has weathered the ups and downs of the work. They farm about 2,600 acres of land in the city, most of which they rent.

“Things probably haven’t changed as much in his lifetime as it has mine,” Dale Holland said, gesturing to his son. “When I was a kid, this was done manually. A lot of it has changed over the years.”

Jason Holland noted that this has been a long harvest season for corn due to colder weather in the spring, which slowed down peanut season. Normally, the Hollands will start digging peanuts in the middle-to-end of September and then finish on the harvest side by the end of October. He said they didn’t want to ruin them by digging them too early.

“We should be done with peanuts by now,” he said on an early November afternoon. “And picking soybeans, cotton and all that, and we’re really just getting started with peanuts just because of the weather. The month of July was so dry, and then it started raining (in August), so we had to wait for them to mature before we could start digging and going after the peanuts.”

At this time last year, Virginia farmers had completed the peanut harvest and harvested 74% of the state’s cotton, according to the Virginia Farm Bureau.

Barlow, a Suffolk cotton grower, told the Farm Bureau that she delayed much of her harvest, hoping that good weather would allow her slow-growing crop to mature.

However, she expected the recent rains to harm her crop as she puts her harvest on pause.

“We’ve been trying our best to wait until the cotton is at an optimal stage, but then you look at the calendar and realize you have to go whether it’s ready or not,” Barlow said last week. “And now that we’re facing another rain event, it not only slows us down from getting back into the field, it also diminishes the quality of the cotton.”

Barlow as of last week had harvested 100 of her 400 cotton acres, but said its quality “was probably the worst” she’s produced.

The National Agricultural Statistics Service’s Nov. 9 crop report had 43% of the state’s cotton in poor or worse condition. The state’s remaining peanut crop has fared better despite the late harvests, with 45% of it in good condition, and another 44% in fair condition.

The city has 270 farms on just over 79,000 acres, according to the most recent Census of Agriculture in 2017. Crops account for 84% of all farm income, with the major plantings being soybeans, cotton, corn, peanuts and wheat, with commodities such as livestock, poultry and other animal products making up the remaining 16%.

Moeller said he got a good sense of the city’s farming culture that he aims to convey on the show, and said it has shown how different parts of the state farm differently.

“It’s been really good to get a sense of how different Virginia is,” Moeller said, “depending on what part of the state you go.”

He also highlighted the city’s aquaculture, filming Johnson while he was out crabbing. It’s all part of why the show wanted to highlight Suffolk’s food production.

“It just shows how diverse the (city) is,” Moeller said, “and all the different kinds of resources that people who are in agriculture have to work with.”