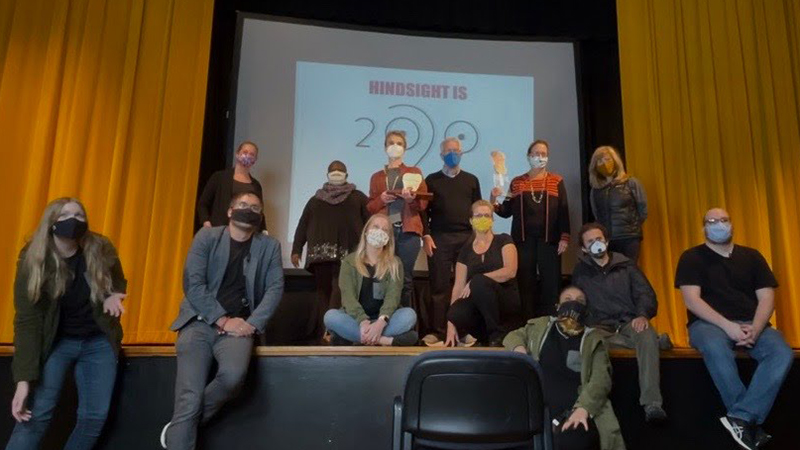 The ForKids team stand with the production team, JPizz, that made their virtual Story Slam fundraiser a success.

ForKids recently held its ninth annual Story Slam. This year, as COVID-19 creeps its way back into the forefront, the fundraiser was a completely virtual experience.

The Story Slam took place at 7 p.m. on Nov. 14 on Facebook Live. Even though the slam is over, anyone can still vote for the favorite storyteller of the night. Voting is open until 11:59 p.m. Nov. 22 on the ForKids website.

The theme this year was Hindsight is 2020. With all of the events that happened this year, ForKids challenged its slammers to look back at events from their own lives to see if they would have taken a different approach knowing what they know now.

“It was great,” said Becky Lyle Pinkard, the external relations manager at ForKids. “It was a challenge to have another fundraiser that had to go virtual, but we are on course to reach our goal.”

This fundraiser relies on viewers to cast their votes for their favorite storyteller of the night. One dollar is equal to one vote; last year’s winner, Parker Duke, won with $7,400, setting the bar high for this year’s competitors. According to Pinkard, even though they could not fill a room like past years, votes and donations are coming in strong.

The money from this fundraiser will go to the general operating fund for ForKids. ForKids is a nonprofit that focuses on helping families and children facing poverty and homelessness. Due to COVID-19 not slowing down anytime soon, ForKids needs support now more than ever.

“Homeless and low-income families and individuals have been hit the hardest by this crisis,” said Thaler McCormick, ForKids chief executive officer. “We’ve been running at about 3,000 calls per week at the Housing Crisis Hotline, which is triple our normal volume. So, our big concern is, ‘How do we do more, not less, and how do we do that safely?’”

The master of ceremonies for this event was Emmy-winning, retired reporter Joe Flanagan. Flanagan proudly introduced each speaker that took the stage, including two high school seniors, a past Slammy winner and ForKids chair, 2013’s number one sales executive in the world, and many more.

The nature of the Story Slam showed how cautious the participants were during the event. It streamed live from Ohef Sholom Temple in Norfolk. Only a skeleton crew was present as the speakers were staggered to reduce the risk of a crowd.

“We probably had not more than 18 people in the room at one time, and it was a big room,” said Pinkard. “We kept all the doors open to make sure we got good airflow. It was a nice safe environment.”

As the camera occasionally showed the ForKids workers and JPixx production company behind the scenes, everyone not speaking at a distance was wearing a mask.

To vote, visit forkids.org/2020-story-slammers. Viewers can choose to watch the full 90-minute event or just watch individual stories before casting their votes. On Nov. 23, ForKids will announce the winner of the coveted Slammy for 2020.