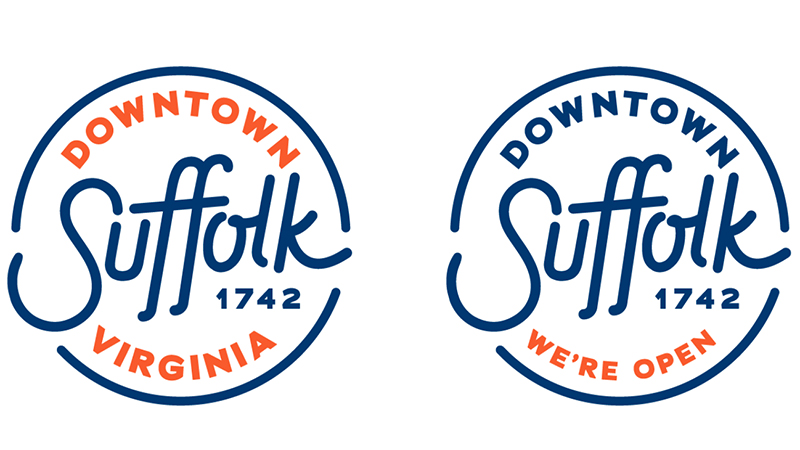 Part of the new downtown branding for Suffolk. (Submitted Image)

But Holt, the city’s economic development manager, said the new brand, which has a bright and bold, yet classic rounded design, similar in that aspect to the famous doughnut chain, is nothing to glaze over, as it can and will be personalized for downtown businesses and their owners as a way to draw people in.

To that end, the brand, designed by the BrandFirst Creative Agency of New Jersey, has one version that says, “Downtown Suffolk Virginia 1742,” with downtown and Virginia in small caps, the city’s name in a classic script and the year the city was founded, and another that leaves out Virginia but adds the words, “We’re open.”

“Our goal for having a downtown brand,” Holt said, “was to make the city more attractive and relevant to the people and businesses within the downtown Suffolk area, as well as to help economic growth.”

The city selected the company to develop a brand for downtown as part of its Downtown Master Plan. It held a pair of public meetings on developing a downtown brand identity late last year, and it spent time in the city and region. It also held focus groups with downtown business owners, and visited several cities, including Smithfield, Portsmouth and the more western Virginia locales of Staunton and Lynchburg, to learn about what others think when they hear about downtown Suffolk.

Dianna Rodgers, BrandFirst’s director of business development, said the goal was to get a thorough understanding of the city’s downtown, its culture and environment.

The agency identified three different target markets for downtown — the traditionalists who admire the area’s history and heritage, people who are family-focused and “creatives” who embrace the arts and innovation.

“They thought that we were heading in a right direction,” Holt said, “They felt that downtown needed its own brand, so they were extremely happy with the way that this came out and just the ability of how we will be able to use the branding going forward.”

Now that the brand is here, Holt said photos of downtown business owners would be featured on banners along Washington and Main streets.

“I feel this would embody the idea of community and just a hometown warmth by celebrating, if you will, the unique shops and people downtown,” Holt said. “This truly is a way to support our local businesses.”

She also envisions the brand going on T-shirts, bags, outdoor table umbrellas, business cards and more, and also feature it in a social media campaign on Facebook, Instagram and other mailers throughout the year.

“I was looking for something to indicate Suffolk as a gateway,” Fawcett said. “What is out there promoting the edges to show Suffolk? And where is the gateway going to be coming into Suffolk? And how far out?”

Interim City Manager Al Moor noted that the downtown branding is the first step to the wayfinding of coming into downtown.

“What this does from a branding standpoint is once you get here, you feel like you’ve arrived to a certain area, to a certain destination,” Moor said, “something that makes downtown something you get out of your car and go have something to eat, or walk the shops.

“Now, the wayfinding, of course, takes some of these brands and starts bringing you this way to the downtown area. And that’s really the next step as we move to that wayfinding signage-type approach.”

Another councilman, Tim Johnson, said he had hoped for a city-wide branding effort, even as he praised the signage presented.

“In my mind, I was thinking that we would be branding the city, not simply downtown,” Johnson said. “And I don’t want us to alienate these restaurants outside of the downtown area.”

Holt noted that the branding effort is part of the Downtown Master Plan, encompassing the downtown area.

Councilman Donald Goldberg said he liked the consistency of the design and hopes to get it down East Washington Street to Amici’s and beyond.

“I think it’ll grow, but I think it’s a wonderful start,” Goldberg said.

Councilman Mike Duman, the mayor-elect, said he liked the logo and wants to see the parking, entrance-way and pedestrian signage tie into the new brand.

Now that downtown has a new brand, what’s next?

To have the city’s downtown light up and let people know it’s open for business.

“Who doesn’t want to stop by Krispy Kreme when the hot sign is on?” Holt quipped. “We just thought that would be a cool little aspect of this design, too.”