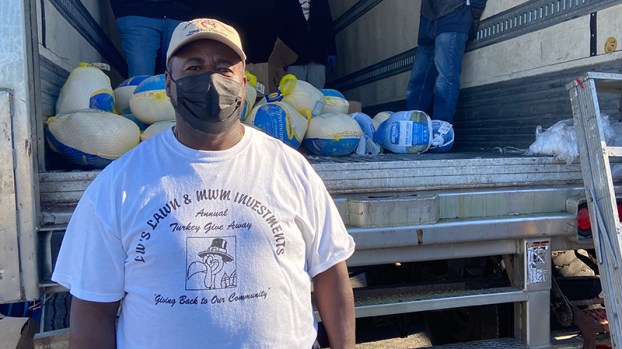 5. LeOtis Williams hosted the 17th turkey giveaway that has earned him the nickname “The Turkey Man.” 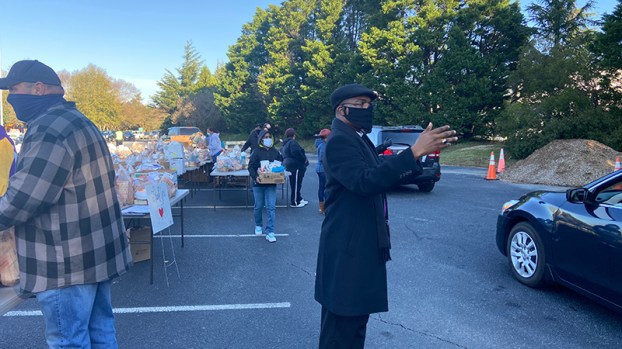 The Saturday before Thanksgiving, two giveaways ensured Suffolk residents have the food they need to celebrate, despite the difficult year.

Williams, who at the beginning of the month was elected to represent the Whaleyville Borough on City Council, has hosted this giveaway for the past 17 years. This year, however, was the first time the event has taken place as a drive-through.

“This year has just been hard,” said Williams. “I thank God to be in a position to be a blessing to so many.”

Suffolk Sheriff’s deputies directed traffic into two lanes down Old Pinner Street. In these lanes, cars visited different stations to receive food for their Thanksgiving meal. According to Williams, the line had been steady for the 147 volunteers since starting at 9 a.m., and cars had been lined up since 4:30 a.m. Williams said he is thankful for “each and every volunteer who made this possible.”

Many notable people were in attendance, including Congressman Bobby Scott, who represents

“This is an annual event of Mr. Williams’, and the community looks forward to it,” said Scott. “This is his chance to give back, and it’s an exciting day that gets the community involved. This city shows what happens when people come together.”

Also in attendance were members of the Suffolk City Council, including Roger Fawcett and Lue Ward.

“People have been very appreciative,” said Williams. “It’s just sad we couldn’t shake hands, talk, and hug like we usually do as people wait in line, but next year will be business as usual.”

Suffolk United held its giveaway starting at 9 a.m. as well in front of the tennis courts at Lake Meade Park.

Suffolk United consists of churches and businesses that want to serve their community. They had tables set up filled with various Thanksgiving foods that 60 volunteers rotated through and placed into bags to be ready for the cars that drove up.

“We are very excited to be a part,” said Renita Figgs from St. Paul Pentecostal Holiness Church in Zuni. “Our youth ministry is here, and they have prepared to come out and were excited. It is a great way to give back, especially in the pandemic. People are really in need this year.”

The giveaway started at 9 a.m., but that did not stop cars from lining up before 6 a.m. Suffolk United Inc. ended the giveaway early after handing out food to more than 400 vehicles in less than two hours.

“Everyone agreed that this was our best year yet,” said Bishop A.S. Hall Sr., president of Suffolk United Inc. “I am grateful that we can be a blessing to the community and grateful to the churches who helped. I am looking forward to a bigger and better year next year.”